Thanks for reading.  If you want to become a writer for infobarrel and earn extra income in your spare time, click here to get started right away.  Its free and easy to do.
InfoBarrel is a writing platform for non-fiction, reference-based, informative content. Opinions expressed by InfoBarrel writers are their own.
InfoBarrel > Lifestyle > Politics & Government

Ever since the discovery of America, people have been extremely motivated to start new their lives in this “land of opportunity”.  America is the symbol of peace and freedom in the eyes of many people around the world.  For years people flocked to the United States with hopes to escape persecution by their home countries.  The United States regulates the number of immigrants that come into the country each year, but it seems that the number of illegal immigrants is growing exponentially. Each year Border patrol makes more that 1 million apprehensions of illegal criminals who ignore American policy and attempt access to the United States by either eluding officials, or by using the aid of fraudulent documentation.  Such entry into the United States is illegal and will result in a misdemeanor charge.  If this criminal act is attempted a second time, this crime becomes punishable by felony.  More than nine million illegal immigrants are bedding down in the United States tonight.  Isn’t there anything we can do about it?

What is considered illegal immigration?

According to Title 8 Section 1325 of the U.S. Code “Improper Entry by Alien,” any citizen of any country other than the United states who:

1. Enters or attempts to enter the United States at any time or place other than as designated by immigration officers; or

2. Eludes examination or inspection by immigration officers; or

3. Attempts to enter or obtains entry to the United States by a willfully false or misleading representation or the willful concealment of a material fact;

has committed a federal crime.

Where are these immigrants coming from?

A majority of illegal aliens will often flee everything they have ever known including their native country in order to escape everything from economic problems to military dictatorships, to war torn environments.  According to the Immigration and Naturalization Service on Motivations for immigrating to the USA,” From 1981 to 1996 most of the refugees came from Vietnam.  One reason for this could be the results of the Vietnam war, because after the war the living conditions in Vietnam were very bad”.  A majority of illegal aliens effecting contemporary America continue to come from Mexico mainly due to geographical purposes.

Why do illegal immigrants come to the United States?

There is a very broad range of reasons why people continuously flock to the United states, although people try, there is no single reason to explain why immigrants seem to choose America.  Why do hundreds of people choose to live their lives in America as illegal aliens, when they could choose to live perfectly legal lives in other economic power houses or even their own native countries?  According to Phil Williams on Illegal immigration and commercial sex,” Millions of people come to this country because corporate America is addicted to cheap labor.  As the years go by we have seen factories all around the United States shutting down and sending all manual labor over seas, where it is done cheaper and arguably more efficiently.  There are plenty of other rich countries in the world, some with an even higher happiness index than the United States, so why do others flock to us?  The answer according to some is quite simple.  Countries other than the United States, such as China, Great Britain, and Japan have very strict policies dealing with the problem of illegal immigration.  There are absolutely no available jobs in these countries for people of this nature.  These countries deny all government services to anyone that is not a legal citizen.   Illegal immigration is not tolerated on any level in countries other than the United States, and their policies seem to be an effective factor in minimizing the burden on their societies.

What are the cons of having illegal immigrants in the United States?

According to Hostettler and Smith on Illegals hurt Americans, “When there are many willing workers, employers cut wages.  That is simple supply and demand.  Illegal immigrants who take low-skilled jobs reduce wages and take jobs from both citizens and legal immigrants…Contrary to the assertion that Americans will not take low-skilled jobs, Americans in fact do these jobs every day”.  When illegal immigrants take these jobs from respectable and law abiding citizens, it contributes to a downfall in U.S. economy.  A study by Harvard economist George Borjas shows that illegal immigrants displace 730,000 legal workers each year.  To help the American economy and the American people we must allow these jobs to be filled correctly.  Americans need these jobs.  According to John Hostettler, the chairman of the House Judiciary Subcommittee on Immigration, border security and claims, 17 million adult citizens do not have their high school degrees.  Out of these 17 million, 1.3 million are unemployed seeking to obtain a job, and 6.8 million have given up looking for a job altogether. Hostettler also says that the percent of 16 to 19 year olds holding jobs now in the U.S. hasn’t been so low since 1948.  This isn’t due to the American people being apathetic toward working to better their lives.  This is due to the mounting number of border jumpers seeking to better their lives at the expense of ours.

The increasing number of immigrants flooding into the country also falls under the concern of homeland security.  Talks of further securing the southern most borders of the United States has been an issue since the 9/11 attacks.  After the attacks took place in New York the security screening in airports has proven effective many times over, but very little has been done on our border with Mexico.  Islamic Fascists from the Middle East were in our country taking flying lessons right under our nose with the sole intention of doing harm to the American people.  It should strike fear in the hearts of every American citizen in the United States knowing how easy it is for terrorist groups to literally walk into our country with bad intentions and hurt us physically, mentally, emotionally, and economically.

What can be done to solve these immigration problems?

There are plenty of solutions for the illegal immigration problems, that for some reason just haven’t been followed through on.  There is more than one way for illegals to inhabit our country.  About half of all immigrants hop the border, while the other half uses the tactic of overstaying their visas.  Due to the various approaches used, there are a number of different angles that will need to be taken care of in order for these plans to be effective.     A simple solution would be as simple as a National Guard border patrol.  A patrol on the border would combat at least one half of the oncoming immigrants attempting to just run over.  In order to assist the troops on border patrol, many have proposed the construction of an elaborate fence, equipped with trenches, watch towers, lights, motion sensors, and cameras.  This would seriously dampen the hopes of simply walking into our country and attempting to start lives here.  To combat the aliens who overstay their visas would take the cooperation of the people along with local law enforcement. 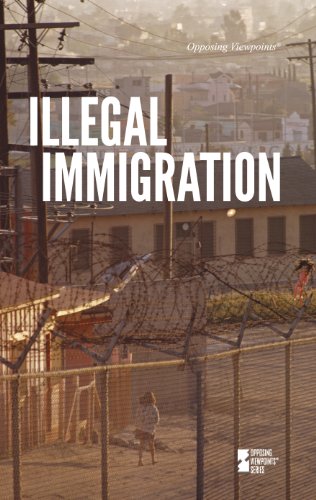 Illegal Immigration (Opposing Viewpoints)Amazon Price: $29.45 $22.51 Buy Now(price as of Oct 3, 2013)
Explore both sides of the fence with this excellent read
Next >> Notable World Leaders Who Weren't Natives of the Countries They Led