Laughter is the best medicine. (Unless you're really sick....then you should see the doctor.)   Whilst every effort is made to ensure accuracy, the information on this website should not be used for medical purposes without consulting your doctor first or for legal purposes
InfoBarrel is a writing platform for non-fiction, reference-based, informative content. Opinions expressed by InfoBarrel writers are their own.
InfoBarrel > Health > Nutrition & Weight Loss

Improve Your Health with Vinegar

The name “vinegar” is derived from the French word for sour wine. It is a diluted solution of acetic acid formed by two simple steps. First, sugar is fermented into alcohol by yeast. The sugar may be derived from fruits, grains or honey. At the end of this first step, we are left with an alcohol-containing liquid, such as wine (from grapes), beer (from barley), hard cider (from apples), or another fermented liquid. In the second step, a naturally occurring bacteria, known as acetobacter, combines the fermented liquid with oxygen to form the acetic acid which gives it its distinct sour taste.

Vinegar has been used for thousands of years as a health remedy. It was documented to have been used by Hippocrates in 500 BC as an antibiotic, anti fungal, anti viral and as a disinfectant for wounds. It has been used by Southeast Asian warriors as a tonic to relieve ailments. During every era they seem to find new uses for vinegar. Currently, it is touted to alleviate a wide variety of medical conditions including type 2 diabetes, obesity, cancer, intestinal problems and heart disease.

According to the 2009 study published in the Journal of Food and Agriculture, mice that were fed acetic acid (the main ingredient in apple cider vinegar) developed 10% less fat despite being on the same diet as others. Consuming vinegar has been reported to increase feelings of fullness and therefore reduce calorie consumption by up to 275 calories per day. Studies have shown that just by adding 2 tablespoons of apple cider vinegar to a normal healthy diet can still end up in an additional 1.7 kg weight loss at the end of a 3 month period. It has been shown to not only encourage weight loss, but also to improve their cholesterol profile. LDL (bad cholesterol) decreased while HDL (good cholesterol) increased. A study published in 2006 in the British Journal of Nutrition proved that daily intake of acetic acid benefitted total triglycerides, not just total cholesterol.

It was announced by the AP John Cancer Institute that acetic acid effectively kills cancer cells by starving them of energy to grow.  Other studies have been published in the Biofactors Journal, Nutrition and Cancer Journal and Journal of Experimental and Clinical Cancer Research in 2004 that support these findings. However most cancer research with acetic acid have mostly been based on laboratory studies of mice and in test tubes. There have also been some conflicting data. For example, it was shown that acetic acid might help to reduce the incidence of oesophageal cancer in a study done in China but it was found to increase the incidence of bladder cancer in  a different study done in Serbia. So, it is still very much premature to make any recommendations on the dosage of apple cider vinegar for cancer prevention.

Vinegar has been shown to have numerous benefits in type 2 diabetics. A publication in the 2007 Diabetes Care Journal concluded that 2 tablespoons of apple cider vinegar can reduce the fasting blood sugar by up to 4%. Another study in the same journal showed that insulin sensitivity was improved during consumption of a high-carbohydrate meal.  This means that the existing insulin in their body was activated and more efficiently absorbed. The apple cider vinegar allowed it to do its job better. For these reasons, people with pre-diabetes readings on blood test could benefit from taking apple cider vinegar daily.

Apple pectin fibre which is found in apple cider vinegar soothes the entire gastrointestinal tract as it passes through and prevents bloating and cramping. When you drink apple cider vinegar regularly, ideally before each main meal, your digestion improves and you naturally begin assimilating more from your food. Despite being acidic outside the body, apple cider vinegar, like lemon water, is more alkaline that your stomach pH. This reduces acidity in the body and has been reported to aid in recovering from a wide range of health conditions and diseases. One of these health conditions is heartburn. Note, however that people with stomach ulcers should not be taking strong concentrations of apple cider vinegar as this may worsen their ulcers.

Also remember though that not all brands are created equal. The best apple cider vinegar are the ones which are the most unadulterated brands.  The most raw or unfiltered apple cider vinegars can be recognised by the presence of “mother”. This is a web-like substance floating in the bottle and will only be present if organic apples are used without being heated or pasteurised. This will ensure that you are getting the strongest live enzymatic action for your money. Some believe that all the health benefits are actually from the mother as it is full of probiotics and protein. One example of such a brand that sells apple cider vinegar together with the mother is Braggs. This is available in most grocery stores and also online (see link above). The easiest way to incorporate apple cider vinegar is to use it as part of your salad dressing, but some people prefer to drink 1 or 2 tablespoons diluted in water. They are also a few companies that sell other flavours of fruit vinegar for those who find apple cider vinegar too strong or not palatable. Each fruit is recommended for their own unique benefits which may not be the same as the ones I have mentioned above for apples. For example, passionfruit vinegar can help insomniacs while lemon vinegar is given to strengthen the immune system. 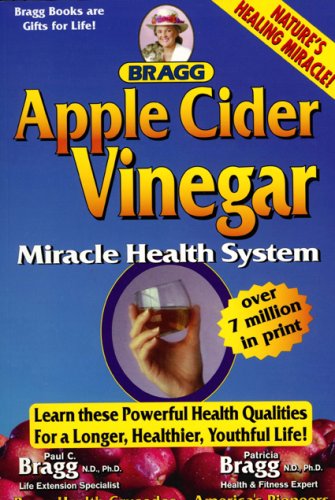