In the shadow of time

Designed in the States and built in Japan, the “Shadow” of Honda has been around for many long years and even longer trips without allowing the mark of time to touch her significantly.

The “Shadow” model, equivalent to the “Steed” version released for the Japanese market, had the difficult role to become the leading model of the company in the category of “middleweight” chopper bikes. It was designed in 1988 in the United States, leader in the market of this kind of bikes, after a number of failed projects and attempts done by the Asian manufacturer till that point of time. The reason to its success in this tricky category –having a very specific target group among bike enthusiasts- was the decision made by Honda to finally “think big”, a decision majestically expressed by the large bike (2355 mm or 92.7 in in length) with a wheelbase of almost 1600 mm. There has been a clear attempt to match the competition in style, providing the bike with a number of standard chromed parts, as the main counterpart of any chopper would be the stylish and unique American designs of Harley Davidson.

Many might remember the VT 500C or even the “street” version VT 500E that rolled out of the factory in the early 80s. The engine of the VT 600C derives from an enlargement of this 500cc engine, so as to reach the 583cc. It’s a V-twin dual-cylinder with 3 valves per cylinder including one unique aspect for a non-US model: the crankshaft nodes are in a straight line, ensuring that there are strong first class vibrations produced, in order to resemble – what else- the vibrations of the Harley Davidson engine blocks. Let’s not forget that the Honda Transalp and the newer Honda Bros 650, that both use the same engine, had slightly repositioned these to remove the somewhat tiring vibrations…or at least tiring to those that would prefer convenience over the style of a chopper bike. The vibration is also made significantly more enjoyable to lovers of the category by the lack of dampers between the engine block and the chassis.

The engine produces 39HP (29kW) at 6500rpm and a torque of 4,9kgm/3500rpm making the bike really easy to ride at low revs. The frame is a double, closed tubing frame, providing no novelty. As any other “real” chopper the Shadow has huge dimensions and the caster angle of 35 degrees, as well as the long wheelbase do not deny this. The telescopic fork in the front wheel cannot be adjusted, as in many street or sport models, whereas the rear suspension can have the spring load adjusted. In the rear suspension lies a secret of the design, as it has a single absorber discretely hidden so that it doesn’t “annoy” the eye, instead of the bulky twin absorbers that frequent other designs in the category. Still, the short drive of the suspension doesn’t eliminate the usual issue of chopper bikes: the fact that –especially with a passenger- bumpy roads can be a pain due to inadequate absorption. The brakes are now outdated but work efficiently for the rides specifications, a single disc up front (290 mm) and a drum brake for the rear wheel.

Aesthetically the Shadow can still stand among newer models, although it’s been out two decades already. The deep red colour and the chrome details captured the eye when it passed and still does. Most enthusiasts can still identify it easily with only a glance at the slick and fluid lines that gave the bike its character without much exaggeration. Chromed headlight, a tear-shaped gas tank, the V-twin with the classic air filter between the cylinders, stock double exhaust pipes, a soft-tail finish and retro wire rims are almost all you need to create a stylish outcome, with the only cacophony being the radiator that tries to hide behind the front wheel.

So, let’s start it up, enjoy the roar and gear to first! Nothing comes as a surprise to riders who have travelled with such a bike before. Everything is exactly where it is expected to be. The four-gear (or five in later models) is perfect in feel and output. In spite of her 200kg (440lbs) the “Shadow” can be driven easily by anyone, even as an entry level bike, since it delicately hides her extra weight, as a charming, but slightly fat, lady should. The only time weight shall be a problem is at zero speed manoeuvres, where a little extra time in a gym will be needed. Luckily the driving position and the seat height of only 690mm will help a lot, especially if the rider is not the tallest person around.

Torque is there for the taking, whenever needed by the rider, especially in low revs, where it excels. Still, the weight doesn’t allow it to start with 2nd gear or 3rd…but who’d ask for it from a chopper, right? Still the four gears prove to be a nuisance in cases, as the shifts are at minimum 20km/h for 2nd , 30 for 3rd and over 50 for the 4th gear without the engine coughing. Still, the torque, combined with the low seat and the low centre of weight makes the bike do really well in the city traffic, as long as the rider can filter traffic and plan ahead, due to the noticeable size of the bike. Where this lady feels at home, though, is cruising…not really a miracle as it is a cruiser bike after all. 50-100km/h is how it should be driven, with the noise and the feel of the engine giving you a peek into the “American dream” of the “easy rider”. The bike rolls so sweet and without issues that we can completely understand why Honda uses the same engine in both enduro-touring bikes as well as street bikes (Transalp and Bros respectively). And it may seem that 40HP would be too few, but assisted by a very sophisticated gear ratio and its excellent performance the bike can easily make a fool out of bikers who will fall for it’s “easy” look and consider the Shadow too slow. At the peak of the engine revs, one can change gears at 70, 120 and 140km/h. Still, this is not the way to ride this one, as over 120-130km/h the fight with the oncoming air is really unjust to the driver, making the top speed of 160km/h a feat to accomplish if not in top shape and willing to fight against nature. But for those that try it, the bike surprisingly does still feel safe at maximum speed. 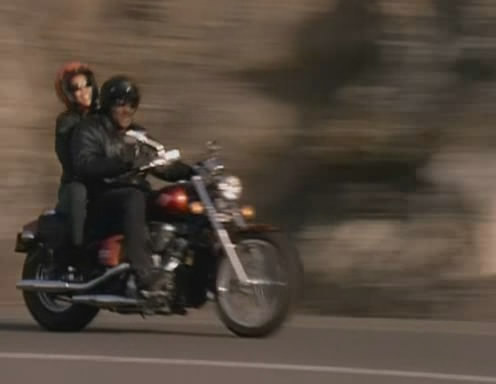 But going fast in straights is an issue, taking curves is a totally other thing in cruiser bikes. It is no sport bike, but it can turn indeed, even if it needs some effort from the rider to drive with counter-steering. It understeers if turned at over 120km/h, but is really enjoyable in slower corners. The suspension lives up to the task, except for big bumps, especially if found during turning. The bike might lose the tail a bit, but it is not something that can easily get out of control or create much unrest.

The brakes are perfect, giving complete feel of the road, progressiveness and a good braking result for the category and the speed reached. Still the braking will need some getting used to, as they are temperamental enough to scare the rider before he learns them well. After this period of getting accustomed it can stop at any condition and situation.

For a cruiser it is also quite comfortable, with the fatigue coming after 80-100km rides without stops, a very good performance for the type. The headlight is strong and can make night rides a nice habit for the rider. But night or day, the best habit is just riding, something really fun with the low consumption that gets from less than 6lt/100km in the city to less than 5 in road trips.

So…would one buy a Shadow? Definitely not, if he sees a motorcycle as a way of travelling from A to B. Soon enough he’ll be disappointed, as there are better bikes out there for long trips, better bikes for quick trips and better bikes for commuting. But what can it do? It can do all these things adequately and with a style and a driving experience that will make all rides unique. It is in the mid-range of engine capacity, it’s easy to ride, it’s cheap to acquire as a used bike and its reliable and sturdy engine makes it a good purchase in most cases, as compared to other used bikes. The design is old but not outdated, it’s just classic, whereas the driving behaviour is far better than most of the bikes of the category. Choosing the Shadow will prove why most bikes are called by a couple of letters and a number and the “Shadow” is called by name.