Do you have some knowledge to share? You can give others the benefit of your expertise and earn money at the same time. Sign up for InfoBarrel and join the friendly community here.
InfoBarrel is a writing platform for non-fiction, reference-based, informative content. Opinions expressed by InfoBarrel writers are their own.
InfoBarrel > Lifestyle > Religion & Spirituality > Christianity

Incorruptibles Through the Ages

'Incorruptible' is the name given to those people whose bodies don't disintegrate when they die – or at least the bodies take very much longer to decay than the average person.

The Catholic Church has long held that individuals who have led particularly saintly lives will remain in a lifelike state after death. There has been no scientific explanation for this phenomenon. Some of these incorruptibles have remained intact and preserved for hundreds of years. Some have been exhumed several times and undergo testing and poking and prodding but still they 'live' on. Many, many years ago, this was viewed as a measure of sanctity, and incorruptibility became a necessary component of becoming a saint. Prospective saints also needed to 'appear' to people after their death and they needed to perform a miracle or two, either while they were alive or after death.

Mummification results in a preservation of sorts but the end result is altogether different from an incorruptible state. The technique of mummification involves careful removal of the organs, the packing of the body cavities with herbs and other material, the bathing of the body in oils and finally the tight binding of the corpse in linen.

There are almost none of these procedures in the case of incorruptibles. What is more, the incorruptible, when exhumed, is still, generally, in a soft and pliant state. The person shows no signs of having been embalmed and in most cases they appear to be only sleeping or at worst only recently dead. Mummies, by contrast, are stiff and rigid, their bodies discoloured, wrinkled and skeletal looking. The supposition that it is the environment that causes such preservation does not stand up to scrutiny as an incorruptible can be in the midst of 'normally' decayed bodies. Certainly burial in certain types of soil may result in very little decomposition of a body but once exposed to the air, the tale becomes very different.

Some of the saints whose bodies were found to be incorruptible are listed below.

St Cecilia is generally recognised as the first saint to be incorrupt. St Cecilia died in 177 and her body was discovered in 1599. There is a statue of her in the Basilica of St Cecilia in Rome. The body is in the same position as she was found when exhumed.

St Agatha died in 251 and her body was discovered in the 11th century. Parts of her body are still in existence.

Note: It seems every incorruptible is different. With some, parts of the body would decay but other parts remain intact.

St Alphege was Archbishop of Canterbury until murdered in 1012.

St Sperandia died in 1276 and her body is on display in the Benedictine convent church of Cingoli, Italy. Her body was exhumed eight times, lastly in 1952. The 'odour of sanctity' surrounds her body.

Note: A specific scent, often of roses, may emanate from an incorrupt body. This is termed 'the odour of sanctity'.

Incorruptibles, and even parts of them, are great drawcards for religious pilgrims and some bodies were dismembered with body parts being distributed among the parishes.

St Zita died in 1278. Her body is displayed in a glass reliquary in the Basilica of St Frediano, Lucca, Italy, but has now mummified.

St Clare of Montefalco died in 1308. Her body was embalmed and has remained perfectly incorrupt for over 7 centuries which is beyond what can be expected of the embalming process. The body is still flexible and is in the church of the Augustinian nuns of Montefalco, Italy.

St Agnes of Montepulciano died in 1317 and remained incorrupt until the 19th century when excessive humidity in her tomb saw some of her body decompose. Seven centuries later, the rest remains incorrupt and enclosed in a figure of the saint on display at the Sanctuary of St Agnes in Montepulciano, Italy.

Blessed Margaret of Metola died in 1320. Her body can be viewed under the high altar of the Church of St Domenico at Citta-di-Castello, Italy.

Blessed Imelda died as a young girl in 1333, was beatified in 1826 and is on display in the Church of San Sigismondo, Bologna, Italy.

St Rita of Cascia died in 1457. As well as having the 'odour of sanctity', her body has been seen in different positions in her glass case with the eyes sometimes open and sometimes shut. (Note: I wasn't able to verify this from other sources.) Her reliquary is in the Basilica of St Rita in Cascia, Italy.

St Catherine of Bologna died in 1463 and is on display in an upright position.

Blessed Osanna of Manua died in 1505. She received the stigmata on her head, side and feet when she was 30. In 1965, her body was examined in depth and found to be well preserved. Her resting place is in a reliquary under the altar in Our Lady of the Rosary in the Cathedral of Manua, Italy.

St Francis Xavier died in 1552. Lime was placed in his casket to expedite decomposition but he was discovered incorrupt. His body is in the Basilica of Bom Jesus in Goa.

St Andrew Bobola was tortured and killed in 1657. Despite his wounds which should have resulted in decomposition and being near other corpses, he is incorrupt and on display in the Church of St Andrew Bobola in Warsaw, Poland. 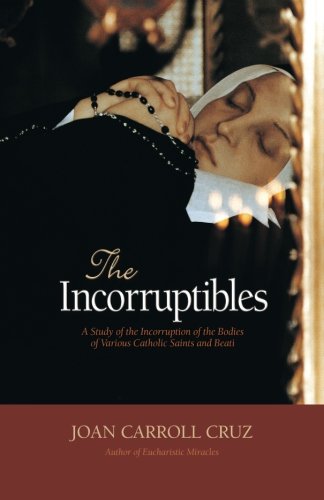 The Incorruptibles: A Study of the Incorruption of the Bodies of Various Catholic Saints and Beati Amazon Price: $16.95 $10.00 Buy Now(price as of May 8, 2015)
This fascinating and carefully documented study gives the stories of 102 holy people whose bodies are incorrupt.

Venerable Mary of Agreda died in 1665. The body was examined in 1909 and 1989 with no evidence of decay. Her body is kept in a convent in Spain.

St Margaret Mary Alacoque died in 1690. Her body lies on display under the altar in the chapel at Paray in France.

St Teresa Margaret died in 1770 and was exhumed in 1783. Her body is displayed at the Monastery of St Teresa in Florence, Italy.

Blessed Anna Marie Taigi died in 1837. Her body remains incorrupt in the Church of San Crisogono in Trastevere, Rome.

St Vincent Pallotti died in 1850 and was exhumed in 1906 and again in 1950. His body is on display under the main altar in the Church of St Salvatore in Onda, Italy.

Blessed Charbel Makhlouf was a priest in Lebanon. His last 23 years were spent in a hermitage where he died in 1898. He was not embalmed and was buried without a coffin. According to documents of the day, a bright light surrounded his tomb for 45 days. Four months later, he was exhumed, found to be incorrupt and placed in a coffin inside the monastery chapel. In 1950, doctors confirmed that sweat and blood still oozed from the body. Finally in 1965, there were only reddish coloured bones remaining.

Pope St Pius X reigned from 1903 to 1914. He gave orders that his body was not to be embalmed but when exhumed the body was incorrupt and remains in view under the altar of the chapel of the Presentation in the Vatican basilica.

Cardinal Shuster, an Italian archbishop, was reportedly sympathetic to Italian fascism but after extensive investigations, he was declared 'venerable' in 1994 and beatified in 1996. Shuster died in 1954 and was exhumed in 1985.

In the 20th century, the Catholic Church decided to forgo incorruptibility as a pre-requisite for canonisation. There has been quite a few studies done on some of these persons but there is really no satisfactory, logical answer to the puzzle at the present time.