The Indian Ring-necked parakeet (Psittacula krameri) is highly intelligent. They can be charming and elegant pets. However they need regular interaction and socialisation if they are to stay friendly and obedient. Indian ring-necks can also be very vocal and raucous, screeching loudly when alarmed. In their native regions, Indian ringnecks are found in forests and arid environments.

It is not uncommon for an Indian ringneck parrot to have a vocabulary of some 200 words and their whistling, singing or speaking is very clear. They enjoy performing and showing off their ability and can be taught such tricks as untying knots. They are popular among the street vendors in India where their elaborate performances and tricks are used to attract customers.

Although native to southern Asia and parts of Africa, specifically western Uganda, southern Sudan, Senegal, Guinea and southern Maruitania, the Indian ring-neck is highly adaptable and has established secure colonies in such areas as California, Florida, Tehran and Great Britain. The formation of wild colonies of bird species on foreign shores is rarely a good thing. The natural order of flora and fauna is altered. There may be few predators in the new area leading to over-population by the new species. This results in more competition for available resources and may lead to the intruders ousting native species. 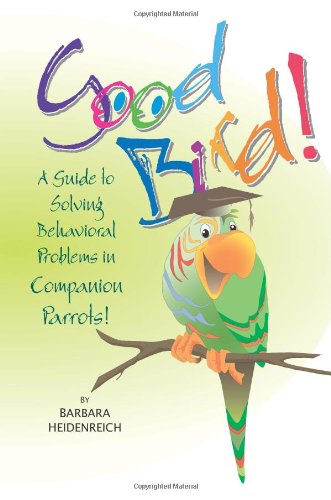 Good Bird! A Guide to Solving Behavioral Problems in Companion ParrotsAmazon Price: $15.00 $7.86 Buy Now(price as of Aug 21, 2013)
With positive reinforcement the author believes parrots can be taught acceptable behavior.

The Indian ringneck is classed as medium sized and weighs around 115 grams. It is about 20cm long with the tail feathers adding another 20cms.

In its native habitat, it is apple green with a more yellowish face, abdomen and under the wings. The upper surfaces of the central tail feathers are blue, tipped with a greenish-yellow. The hooked beak is red with the upper beak having a black tip. There is a fine black line connecting the cere to the eye.

Pet birds appear in several mutations such as powder blue (very popular), white, buttercup yellow, pied and violet (rare). The bird will be about three years old before the adult colouring will appear. A clutch normally has 3 to 6 eggs. These are incubated for around 23 days.

These attractive birds are sometimes known as the Indian rose-ringed parakeet. This is due to the ring around the neck of the male. The ring is black with pink and pale blue outer rings. The rings on the female are very pale and difficult to see.

While inexperienced bird breeders sometimes say the Indian ringneck is not suitable as a pet, this is not so. They can be more challenging than some parrot species but the rewards are fair recompense for the work involved. Regular handling and socialisation will result in a friendly bird which is full of personality.