Insect Invasion: How do you Get Rid of Ants Without Chemicals?

With more than 12,500 species of an estimated total 22,000 species of ants out there, it is not uncommon that some manage to find their way into your homes.  Ants can form colonies anywhere from a few dozen to millions of individuals.  Having to feed that millions of mouths of any size can be a daunting task.  So how can you keep your home off the menu?

Listen soldiers.  We are at war.  Listen carefully and follow my direction.  If you follow these steps you come out of this war alive.  Remember, this article follows the Geneva Convention and involves getting rid of ants without chemicals.

Getting rid of ants without chemicals Tactic 1- Deter the scouts:

The first sign of any invading army are the scouts.  Sent to probe the barriers and check for valued resources, these are often the first signs of a full blown invasion.  Trying to eradicate each and every incoming scout comes as a useless effort as their forces vastly outnumber yours.  The key to stopping the invasion is to lessen the potential benefits to their invading forces. A.K.A don’t make coming into your home worth their while.  This may prevent the major problem before it starts and should be taken into immediate action as soon as initial problem signs are spotted

How to Take Action

-          Wipe affected areas with soapy water several times daily.  Leave suds and soap to dry on its own.

Be relentless with this method for 7-10 days upon initial sighting of scouts or even the start of a full blown invasion.  Keeping the area clean will pose as a non-beneficial area for the ants to locate themselves and they will soon depart from the area.

In the event of a persistent enemy, there are other methods on top of cleanliness that may take care of the problem and stop the invasion in its tracks.

Getting rid of ants without chemicals Tactic 2 – Seal All Entrances:

This method will take a small amount of scouting work yourself.  A bit of counter intelligence if you will.

If you are able to, make an attempt to locate the area of entrance into your home.  (Sometimes this can be far easier said than done.)  In the event that you do find the area in which the enemy is entering your home, do what you can in order to barricade the entrance.  Depending on the areas at hand, you can use an array of different methods which include putty, glue, plaster, silicone, or any other form of sealant.  If you are not by any means an individual of ingenuity, feel free to use petroleum jelly or tack as a temporary solution which may end up being a formidable enough barrier if laid out correctly.

This method while keeping ants out will also work in trapping the already invading ants inside of your house.  By sealing their means of escape, you have now made it your mission to eliminate the existing stragglers that remain stranded behind enemy lines.  Take no prisoners!

Since ants use a series of complicated chemical trails in order to navigate and locate already scouted out areas, it is highly effective to place barriers which will ruin or blockade these chemical paths.  There are several items which you probably have in your own kitchen that will work in forming a make shift barrier for these areas.

Getting rid of ants without chemicals Tactic 4 – Use the enemy’s own tenacious behaviors against them:

In the event that the war wages on through the weeks with no end in sight, the tactics need to be changed.  Continue to hold strong with the old methods while deploying a new tactic that uses the enemy’s strength against them.

The ants are seeking food primarily.  If previous tactics have proven minimally effective, its time we feed the ants.  Seems counterproductive right?  Wrong.  Ants have an inability to digest certain foods and will die of expansion issues if they digest others.  Consider this a loophole around the chemical weapons aspect of the game.

1.     Use cornmeal in high traffic areas.  Allow the ants to eat this.  While cornmeal is harmless to humans, it is impossible to digest by ants and will lead to their eventual death.

2.    Caffeine will kill ants.  By feeding them new or used coffee grounds you will begin to see reduced numbers (this method takes several weeks to work.

3.   Farina, also known as cream of wheat is another method of killing that will have a much quicker effect than caffeine.  Shortly after this product is consumed it will expand in the ant’s body and cause death within a short period of time.

If you are dealing with fire ants or carpenter ants that hold a potentially sever risk to either your home or family, aggressive action should be taken quite rapidly.  Remember however that in every war there comes time when Special Forces tactics are needed.  If you feel that you are placing risk to yourself or your assets, don’t hesitate to upgrade your tactics by calling an exterminator or using poisons.  As much as having poisons placed around your house and family can seem unappealing, the consequential repercussion of not taking the appropriate method of action can be far more costly in the long run. I have listed a few products below which are recommended for killing large scale.  Geneva Convention gets tossed out the window when desperate times are in order.

If you are refraining from using poisons because you for some reason have sympathy for the enemy, realize for a second that the ant population of the world makes up an estimated 15-25% of the estimated living terrestrial biomass on the planet.  Killing millions won't even make a dent. 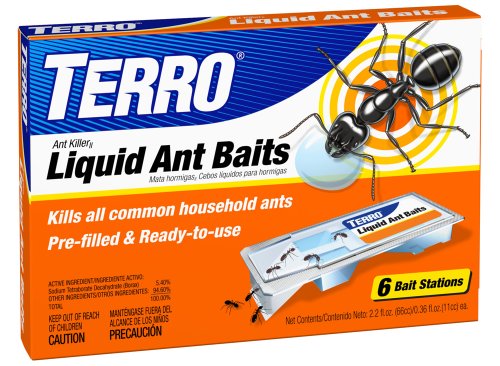