You can find a large selection of beautiful illustrations and artwork at these links: GeographyPosters.com MapArtwork.com You can enjoy the fine images and decorations, and if you like some of them, then it is easy and safe to order some high quality prints and posters.I hope you enjoyed this article. Please give me your comments.If you arenâ€™t a member yet then join a friendly community: Sign up for a free InfoBarrel Membership here. As a member you can make comments on the articles. Or why not write some articles yourself, and earn some extra money.
InfoBarrel is a writing platform for non-fiction, reference-based, informative content. Opinions expressed by InfoBarrel writers are their own.
InfoBarrel > Travel & Places > Places > Ireland

Interesting Places to Visit in Ireland

Ireland is loaded with so many amazing sites to see and things to do. There is no way you should ever travel and not get the chance to go to Ireland. Ireland is a place of many amazing things. Here are some of the top things I like about Ireland.

Ireland is known for the beer and the pubs. The pubs in Ireland tend to have a historical charm that is hard to come by in the United States. Pubs in Ireland are sometimes referred to as Public Houses. Pub is short for public. Even if you are not a beer drinker it is still neat to saunter into an old tavern in Ireland and order a drink, even if it is just a soda pop. Whatever you do never ask for a Budweiser when you are in an Irish bar in Ireland.

O’Connell St is the main thoroughfare in Dunlin, Ireland. There are a lot of different activities and things to see and do on O’Connel Street. Lower O'Connell Street is home to some very unique architectural styles so ensure that you bring your camera with you.

There are a lot of old churches and cathedrals in Ireland but St. Mary's Cathedral, Kilkenny is my favorite. The beauty of this cathedral is very amazing, yet the design is still very functional even though it is a very old building. The style of architecture is often referred to as Early English Gothic.

Ireland is known for the beautiful music. Who wants to dance an “Irish Jig?”  We often think of Celtic music when we think of Ireland but every form of music around can be found in Ireland. Ireland even has some gangster rappers. The famous singer Sinead  O’Connor is from Dublin, Ireland, and she incorporated many aspects of Irish music into her music.

The people of Ireland are unique and amazing. Regardless of which part of Ireland you visit you are bound to find some amazing people.

Greyhound Racing is very popular in Ireland. If you have never had the opportunity to watch these beautiful dogs race then you should go visit one of the popular tracks. In addition to watching the dog races, the Greyhound tracks are also a great place for “people watching”.

The Trim Castle remains in Trim, County Meath, Ireland, are truly amazing. For castle historians as well as the public at large the Trim Castle is often one of the highlights of any trip to Ireland. The Trim Castle is the place where you can literally get up and close to ancient history.

To the people in the United States, Cork, Ireland may not be as well known as many other Irish towns such as Belfast; however, Cork, Ireland remains a very popular town for visitors to Ireland.

Cork, Ireland is the third largest City in Ireland. There are a lot of cool things to see and do when visiting Cork, Ireland. The Church of Shandon is a very famous building in Cork.

There are a lot of great books for people who are interested in Ireland.  One of the best books on Ireland for people who like the historical aspects is a book called In Search of Ancient Ireland: The Origins of the Irish from Neolithic Times to the Coming of the English.

In Search of Ancient Ireland: The Origins of the Irish from Neolithic Times to the Coming of the English traces the history and evolution of Ireland from the Neolithic times to the 12th Century. Even if you are not normally into reading ancient history this books presents the ancient history of Ireland in a fascinating way that is very fin to read.

In addition to a chapter on the Celtic people there is also a chapter dealing specifically with the Vikings. In Search of Ancient Ireland: The Origins of the Irish from Neolithic Times to the Coming of the English is a great book on the history of Ireland.

In Search of Ancient Ireland: The Origins of the Irish from Neolithic Times to the Coming of the English into a boring to read textbook style college book. This book is presented in a way that is fun to read and flows naturally from one chapter to the next. You will not be bored like you are with many college textbooks. This book is designed to be informative and fun to read. Fortunately it hits a homerun on both accounts. Buy this book and you will not regret it. 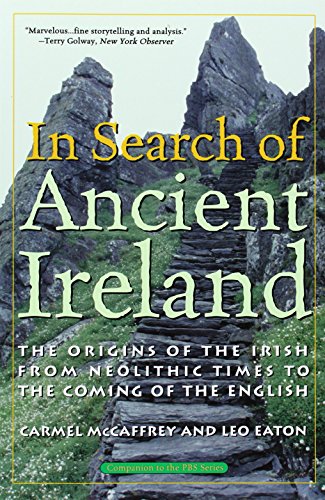 In Search of Ancient Ireland: The Origins of the Irish from Neolithic Times to the Coming of the English Amazon Price: $16.95 $9.85 Buy Now(price as of Jan 2, 2016)
Next >> Top Things to do in County Cork, Ireland