Find me on Google+ Like what you see? Think you can do better? Sign up for InfoBarrel!
InfoBarrel is a writing platform for non-fiction, reference-based, informative content. Opinions expressed by InfoBarrel writers are their own.
InfoBarrel > Lifestyle > Holidays & Celebrations

The Origin of International Women's Day

The first person in Western Europe to propose that women be given the right to vote was John Stuart Mill, who put his proposition before the British Parliament in 1869. However, it was New Zealand who first gave women the right to vote in 1893. In other countries in the world, including the United States, women did not have the that right for many years. As early as 1908 in the United States, women in New York were marching by the thousands through the streets, demonstrating for shorter hours, better pay, and the right to vote. Indeed, it was only thanks to sustained and energetic protests by the suffragettes that women finally obtained the right to vote in most countries (in the United States, this right was given in 1920).In Copenhagen, Denmark, in the labour-movement building located at Jagtvej 69, organizers held an International Conference of Working Women, and Clara Zetkin, the leader of the "Women's Office" of the German Social Democratic Party, proposed the idea of holding an International Women's Day on the same day each year, in countries around the world, to promote the rights of women, particularly the vote. At this initial conference, which more than one hundred women attended, representing seventeen countries and encompassing many occupations, including the first three women members of the Finnish parliament, Zetkin's proposal was passed unanimously, cheered enthusiastically by women from unions, political parties, and women's clubs for working women.Clara Zetkin then organized the first International Women's Day on the 19th of March, 1911, the following spring. She chose the 19th of March because of its significance in the 1848 Prussian revolution, when the king was forced to acknowledge the strength of the armed citizenry, and had to acquiesce to the demands of his enraged subjects. Although he did not keep his promises to his people, one of the promises which he had made was the right for women to vote.

The History of International Women's Day

The first observance of International Women's Day was organized mostly by word of mouth, with a few press notices, and observed in only Austria, Denmark, Germany, and Switzerland. In the week preceding the celebration of International Women's Day two political journals were launched: The Vote for Women (Germany) and Women's Day (Austria). Numerous articles covered subjects appropriate to International Women's Day: "Women and Parliament," "The Working Woman and Municipal Affairs," "What Has the Housewife Got to Do with Politics?" and many more. The articles gave thorough analyses of the station of women in different countries and societies, with specific reference to gender equality. The articles were unanimous in affirming that in each case, the society would become more democratic by allowing women the right to vote.At the first celebration of International Women's Day, the idea had clearly caught on in a big way. Meetings were organized in small towns all over the world and village halls were packed to the rafters. Men were asked to stay home with the children and tend the house for this one day so that women could go to these meetings. Over one million people attended local meetings.The largest demonstration in that year had thirty thousand women marching in the street, and the police engaged in a scuffle with the women, removing their banners, and it was only when the government was called in that violence could be avoided.Russia observed International Women's Day for the first time in 1913, on the last Sunday in February. Later in 1913, the organizers decided to move International Women's Day to the 8th of March (near the celebration of Ada Lovelace Day on March 24, honoring women's achievements in science and technology ), which has been the date on which it is observed worldwide ever since.It was not until 1975, sixty-four years after that first observance, that International Women's Day was officially recognized by the United Nations, and afterwards the holiday was readily made official by a number of countries. Today Albania, Algeria, Argentina, Armenia, Australia, Azerbaijan, Bangladesh, Belarus, Bhutan, Bosnia and Herzegovina, Brazil, Bulgaria, Burkina Faso, Cambodia, Cameroon, Chile, China, Colombia, Costa Rica, Croatia, Cuba, Cyprus, Ecuador, Estonia, Denmark, Finland, Georgia, Greece, Hungary, Iceland, India, Italy, Israel, Laos, Latvia, Lithuania, Kazakhstan, Kosovo, Kyrgyzstan, Macedonia, Malta, Mexico, Moldova, Mongolia, Montenegro, Montevideo, Nepal, Norway, Poland, Portugal, Romania, Russia, Serbia, Slovakia, Slovenia, South Africa, Sweden, Spain, Syria, Taiwan, Tajikistan, Turkey, Turkmenistan, Ukraine, the United States, Uruguay, Uzbekistan, Vietnam,and Zambia now all celebrate this day as an official holiday.Although women have made enormous progress, there is still a lot of room for improvements in their conditions. Women are still inferior to men in pay, in medical diagnoses for conditions such as heart disease, and women are far more often the targets of violence than men. There are a hundred thirty million children in the world who do not go to school. Two out of every three of these children that do not attend school are girls. In addition, it is clear that women are not equally represented in political office in many countries, including the United States. Only twenty-four women have been elected to be heads of state or government in this century. Only 14.1 percent of representatives elected to Parliaments around the world are women. In early 1995, Sweden became the world's first cabinet to have equal numbers of men and women. Of the 189 highest ranking diplomats to the United Nations, only eleven are women. However, more progress is made each year, and the United States has declared the whole month of March each year as Women's History Month.Why should anyone care about the equality of women? Simply because equality for women benefits everyone. For example, every one-percentile growth in girls' secondary schooling results in a 0.3 percent growth in the economy. The majority of the world's 1.3 billion absolute poor are women. On average, women receive between thirty and forty per cent less pay than men earn for the exact same work. In 1995, the United Nations held a Women's Conference in Beijing. In the position paper that emerged from the conference is this statement: "The advancement of women and the achievement of equality between women and men are a matter of human rights and a condition for social justice and should not be seen in isolation as a women's issue."

To celebrate International Women's Day in the United States, Mary Kay offers free makeovers on that day each year (in 2013 44,000 women received makeovers). Contact your local representative to book an appointment for yourself, or that special woman in your life.So on March 8th, every single year, whether you are male or female, tell all the women in your life--not only your mother, sister, wife or daughter, but your colleagues, clients, employers or employees, and everyone with whom you do business--how much you appreciate their social, historical and political contributions! 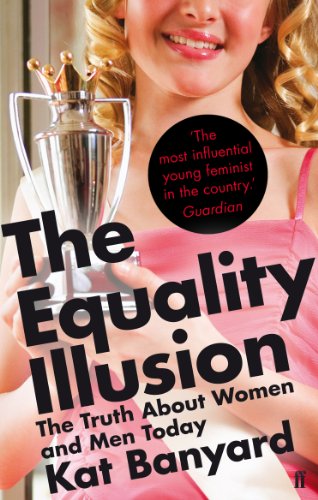 The Equality Illusion: The Truth about Women and Men Today Amazon Price: Buy Now(price as of Oct 22, 2016)
Walking readers through a typical day, the author helps us become aware of just how unequal the world really is. Issues you may never have thought about are highlighted.
Next >> How to Recycle Christmas Cards - 5 Fast Ways to Get Creative Even if you are NOT