Writing on Infobarrel is fun.  Sign up now and find your voice. BoomerBill
InfoBarrel is a writing platform for non-fiction, reference-based, informative content. Opinions expressed by InfoBarrel writers are their own.
InfoBarrel > Lifestyle > Politics & Government > US Politics

Many of us who read political commentary on the internet also scroll down into the comments section at the end of an article.  The comments are cluttered with a litany of vociferous barbs for and against the columnist.  Some of the comments are quite harsh, particularly when those leaving comments start to attack each other.  This type of give and take differs from political debate when face to face, except in limited circumstances.  What is going on?  I’ll give some thoughts and theories.

Nearly all of us have social filters of differing degrees.  Very few of us give our unvarnished truthfulness  when we answer questions posed by our loved ones or our close coworkers.  “Do I look fat in this?  Can you see my love handles?  How was my presentation?  Do you think I’m smart?”  Depending on your relationship with the person asking the question, you may or may not say what you actually think.  Alternatively, you might say what you think yet give your opinion in the most diplomatic way possible.  “You look good, but I’d suggest you wear this instead.  Your presentation needs some work, but the basic premise is good.”  You shade the answer to preserve your relationship.[1]

You may even hold back in giving your opinion to people who aren’t your friends or those whom you view as competitors or rivals.  In this instance, you are wary of repercussions.  Why start a fight when it’s unnecessary?  Why let a rival know you are not supportive of them until the time is right for you?  If you are completely honest and show your hand, you could create a difficult situation for yourself.

What if you could give your opinions without someone knowing the source?  What if you could give your answer without threat of recrimination even if your actual thoughts are somewhat harsh and negative?  Enter the internet.  Although someone with a modicum of training and some time on their hands could figure out your identity, for practical purposes, most commentary relating to online political commentary is anonymous.  Folks can set up a user name and go at it.

Although not entirely anonymous, most folks feel anonymous enough to give their own unvarnished truth on the internet.  They don’t feel as if they have to hold back.  If they think someone with an opposing viewpoint is an idiot, many are comfortable saying so, even if they might hold back if face to face.  Are they chicken?  Not really, they are practical.

What can we glean from shouting in text form at one another?  One benefit is actually hearing

Credit: wikipedia commons public domain - Olaf E. Caskin the other guys’ opinions.  We are increasingly stratified into red states and blue states, living among concentrations of like minded individuals.  We may not hear the other side of things in our normal day to day existence.  Further, we tend to listen to news sources to confirm our existing opinions instead of challenging them.  How many liberals get their political discussion from MSNBC?  How many conservatives get their politics fix from Fox?  Watching TV networks with a significant amount of commentary from the other side of the opinion ledger can be upsetting and annoying;however, your thought processes should benefit from listening to the other guys.

Seeing comments from real live people who believe differently from us can challenge us to sharpen our thinking and flesh out our reasoning.   While they may not make us change our minds, others can certainly make us use our minds to more fully understand why we think we’re correct.

Perhaps the most helpful aspect of seeing strong internet commentary among us is to understand the saliency of opinions.  How strongly do folks with a given viewpoint believe in  their opinion on a given matter?  How important is it to them?  A minority with a strongly held belief can hold off a majority of folks who believe otherwise if the matter under discussion isn't all that important to the majority.  While internet back and forth commentary certainly is not any kind of scientific polling, it does give one some idea of whether a given point of view is important to a segment of the population.  If someone is ranting on the internet, then you can likely believe the ranting is derived from a strongly held opinion.

One good example of this phenomenon is the subject of gun control.  While the proposition that a majority favor more control is arguable, and perhaps untrue, what is unarguable is the gun owners opposing further gun controls have much more salient and strong opinions against gun control than most proponents.[2]  Each gun owner sees themselves as being directly impacted by additional controls or potentially impacted if one type of regulation leads to more, while most gun control advocates view the issue more in the abstract as something that would help society as a whole.  The gun control advocates, in general, will not go to the mat on the issue while those opposing more control will push hard against it.  The only way additional regulatory laws are adopted in this sort of scenario is when an overwhelming majority are in support, with a greater majority being necessary with low issue saliency among the supporters.

Although it may be difficult to be the target of someone hitting you hard in online discussion, at least understanding the context is helpful.  The person taking a tough swipe at you feels strongly about an issue and wants you to know they feel strongly.  In  many ways, the online reaction to you is not personal in that the other guy doesn't know you and won't have any other contact with you.  They have very robust feelings against your point of view and want you to know it.

Even if trying to advance your own point of view, knowing that the other guys have strong opinions the other way can or should change your approach.  Engaging in name calling is never beneficial.  Trying to understand what the other guy is saying is helpful and realizing that name calling could be evidence of a firmly and staunchly held belief should color your response.  Maybe they are saying things under a cloak of internet anonymity.  They still believe the underlying premise of what they are saying and have strongly held beliefs. 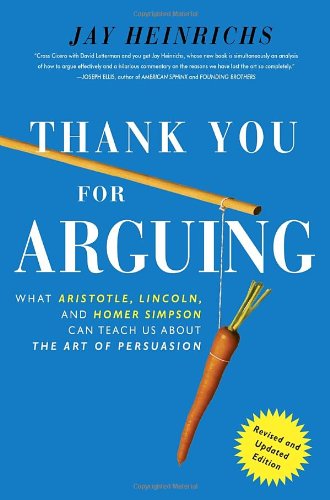 Thank You For Arguing, Revised and Updated Edition: What Aristotle, Lincoln, And Homer Simpson Can Teach Us About the Art of Persuasion Amazon Price: $15.00 $7.54 Buy Now(price as of Jun 18, 2015)
Next >> The Stories Behind American Political Mascots