Hollster
InfoBarrel is a writing platform for non-fiction, reference-based, informative content. Opinions expressed by InfoBarrel writers are their own.
InfoBarrel > Health

Is Attention Deficit Hyperactivity Disorder (ADHD) a Curse or a Gift?

I was born in 1975 before ADHD was really a ‘thing’. I was labeled as a hyperactive child and prescribed Ritalin, which my mom refused to give me. This was during a time when special diets were the thing to do, so my mom planted a garden and made bread from scratch (thank you, Mom). My parents had a difficult time arranging babysitters for me, from what I remember. I could never stop moving. Sitting still for any length of time was out of the question and I still struggled to sit through a single movie all the way through.

I eventually found healthy coping mechanisms (sports and music) for my unique academic challenges as I grew. As an adult, I had seen other kids, first-hand, who had discontinued their ADHD medication as an adult, due to a lack of access to medication, and they looked to illegal drugs as a replacement, which eventually destroyed their lives. This, of course, scared me enough to steer clear of even medication that could help me. I’m happy with my exercise, healthier diet, and playing my music, but I realize that not everyone is me and some people really need medication.

I grew up and had four lovely children of my own. Surprise! I ended up with a child labeled as ADHD after almost all of his teachers had begged me to have him tested since kindergarten…by the third grade, we finally relented and had him tested. If you're reading this article, you likely have gone through the same school ADHD roller coaster that we went through. I think because I really understood him, I never perceived him as having a ‘problem’. Sure, he acts very differently from his peers, but he’s kind, friendly, happy, energetic, helpful, very bright, and generally a really neat human being. He just cannot sit still and is in his own world when he’s not interested in a school subject…he really tries. We tried medication. It worked for about a year or two until some bizarre and very scary side effects occurred. We were offered alternative medications to try, but decided that it was not worth the risk of more, or other, side effects.

Despite the different schools pushing us to medicate, we requested modification plans to help our son stay focused and complete his work. Those of you who have children with ADHD or other challenges are probably familiar with an Individualized Education Plan (IEP) or a state plan. These plans serve to allow accommodations for kids who can’t focus, have impulse control issues, or any other issues that interfere with school. In my experience, these accommodations only serve to help teachers have a little more patience with these kids, give kids more time to finish tests, and help kids stay organized...this is helpful, but has done little to help my kid actually flourish, or excel at the areas he’s really good at. it's no secret that kids with ADHD (or ADD) just do not fit in today’s learning styles prescribed in traditional public schools. We tried a charter school for semester, but it didn’t work for his needs either. My son studies independently at home now, with a lot of my help.  At home, he’s able to get up and move. We can integrate breaks every 15 minutes. He can listen to music while studying. He can focus on just one or two subjects for that day. His school work is completed in 3 to 4 hours instead of 7 hours. Since studying at home, my son went from failing high school to a 3.0 G.P.A. in only a few months…and he’s happy, which is most important to me.

Is There Sometimes a Fine Line between Gifted and Special Needs?

My son has a sister who is 17 months older than him. They are now almost 16 and 17 years old. Side by side they had many similar traits when they were little. They were usually lost in their own worlds, struggled with handwriting and learning to read, their brains moved faster than their mouths could keep up with…pre-school and kindergarten were very challenging for both of them. Both exhibited classic ADHD signs early on. What I found really interesting is that somewhere in the middle of elementary school, my daughter was labeled as gifted while her little brother was labeled as ADHD. They both had high state test scores and were both very bright, but my son had good grades one week and horrible grades another week while his sister maintained good grades. My daughter had found her coping mechanisms and was placed in the GATE (Gifted And Talented Education) program, but my son was pulled out for special education classes throughout each week. I thought, man, something is so wrong with this system!

Since I had been labeled in the 70’s and had struggled with sitting still and focusing all of my life, I had decided to just try medication once for about a week. I hadn’t realized what ‘normal’ felt like my whole life until that week. It was nice to have a break from my racing brain that feels like it constantly is firing on all cylinders at the same time. I had to take a 3-hour really difficult engineering exam and was able to relax without getting up and could sit through the whole thing with total focus! Amazing! But I prefer my ADHD. I know that sounds crazy. I don’t feel like I am who I am without ADHD. My greatest, sometimes craziest, ideas come from who I am. My son lost his spark when he was medicated. I’m not saying medication is wrong or bad. I know plenty of people who can’t even function in their lives without it; but maybe we need to re-think whether ADHD is a disability or a gift.

Be Thankful for the 'Curse' of ADHD

Our society tries to cram every person into a pre-determined life spectrum in both school and work settings. People with ADHD don’t fit within this spectrum and there is a LOT of us. According to the Centers for Disease Control and Prevention, 10 percent of children younger than 18 years of age were diagnosed with ADHD in the Year 2010, and most children carry ADHD into adulthood[1]; and these are the people that actually seek help and are diagnosed! There may be many, many people out there who never seek out medical intervention.

Maybe ADHD is considered by mainstream society to be a disability because people with ADHD don’t learn and behave the same way other people learn and behave…we’re outliers. Growing up, my dad always told me that people with ADHD play important roles in society (maybe he was just trying to make me feel better). Being easily distracted can save our lives: it can alert us of the enemy, prevent us from being in a car accident, it can make us an asset to an emergency medical team via quick response, and more. With the curse of being easily distracted comes the gift of hyper-focusing in times of need or rising to seemingly insurmountable challenges in situations that require quick reflexive response. If I’m enjoying what I’m doing, you can’t tear me away from it…same with my son and daughter. We’d rather be late to work or school so we can finish our task...oh, but what an amazing masterpiece we will have created (at least it’s a masterpiece to us)! ADHD kids obsess over certain subjects and learn all they can about it. Would you rather have a surgeon who obsessively learned everything he or she could learn about performing surgeries? Or a surgeon who worked hard to get good grades and graduate medical school? Both are good things, but I’d prefer an obsessed surgeon. We’re passionate about what we love. Embrace your own ADHD, or anyone else in your lives that have ADHD! While no one can say for certain whether or not some of the historical / deceased figures in history actually had ADD or ADHD, just for your entertainment (and mine), here is a list of famous people in history who were thought to either have ADD / ADHD traits or were actually diagnosed, according to ADD/ADHD Treatment Information Center Online: 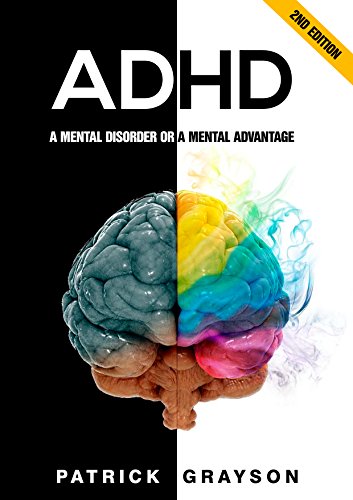