Thank you for reading. If you have concerns about what you may be feeding your dog, please take a look at Why Dry Dog Food is Bad For Dogs and Is Your Dog Allergic To Its Food?
InfoBarrel is a writing platform for non-fiction, reference-based, informative content. Opinions expressed by InfoBarrel writers are their own.
InfoBarrel > Lifestyle > Pets & Animals > Dogs

Is Rice Laced With Arsenic?

It’s a frightening prospect to think that despite trying to do the very best for our dogs by feeding so-called natural and healthy foods such as boiled rice, we may in fact be slowly poisoning them. Research has uncovered some startling facts about this very popular cereal grain, the most worrying of all is that some of it has potentially toxic levels of arsenic.

Arsenic is both one of the most dangerous and one of the most useful substances on the planet. It was once commonly used as rat poison and, when levels get high enough in the human body, it can lead to multiple organ failure, a variety of cancers, diabetes, cardiovascular and renal problems. The fact is that (organic) arsenic is a naturally occurring substance found in rock, stone, rainwater, seawater and even in the air we breathe, which is a revelation to some people. It is the 53rd most abundant element. The industrial age caused organic arsenic to become converted into an even more poisonous (inorganic) compound, largely as a bi-product of various manufacturing processes. Despite continuing efforts to control the levels of arsenic in our environment, it still manages to seep into agricultural land in most parts of the world.

In addition to the very small amounts of arsenic found in the soil of most agricultural land, larger concentrations have occurred in some regions due to the routine and habitual use of chemical pesticides by cotton farmers until the 1980s. Ammunition manufacturing is another reason it has invaded the soil structure, because arsenic proved helpful in creating harder and more uniform bullets. The substance was also used widely in the tanning industry, semi-conductor manufacturing, copper smelting and timber fabrication.

In short, while arsenic occurs naturally in the environment, it has also been used extensively for many years in different industrial applications, which in turn has increased its concentration in various parts of the world and has caused it to develop into a serious global health hazard. For example, it is known that 53 million people in the Bengal basin are regularly drinking groundwater that has levels of arsenic higher than the minimum concentration standard of 10 parts per billion advised by The World Health Organization. Various scientific reports and epidemiological studies say there is a very definite link between populations that regularly drink contaminated groundwater and the number of early deaths due to the leading causes of mortality.

Why Has Rice Come Under Scrutiny?

Of all the crops grown for both human and animal food, rice has three red-flag-concerns that put it firmly under the spotlight:

In 2012, the highly respected Consumer Reports brought the danger of arsenic-tainted rice to wider public attention and lobbied for increased federal action. Consumer Reports began in 1936 and is an expert, independent, nonprofit organization whose mission is to work for a fair, just, and safe marketplace for all consumers. Its 2012 report found that while there are federal limits for arsenic in drinking water, there aren’t many standards for arsenic in food. Worryingly, they found varying levels of arsenic in more than 200 human food product samples and most of the 60 samples of rice and rice products tested contained the more dangerous carcinogen – inorganic arsenic. Their report also discovered:

Consumer Reports have kept up the pressure on government agencies and have urged them to become more cautious about arsenic contamination in the food chain. The Food and Drug Administration (FDA) is consistently testing the levels of arsenic in rice products and has done for decades and, in 2011, it stepped up its investigations. In 2013 and after the testing of 1,300 sample products it concluded: ‘The levels FDA found in its testing are too low to cause immediate or short-term adverse health effects. FDA’s work going forward will center on long-term risk and ways to manage it with a focus on long-term exposure.’

The FDA also commented about how best to cook rice to help reduce the level of arsenic content: ‘Published studies report that thoroughly rinsing rice and cooking it in volumes of water five to six times that of the rice can reduce up to roughly half of the arsenic content. At the same time, such preparation may well lower the nutritional value of the rice (i.e., the folic acid content of fortified rice and some B vitamins). The FDA is not aware of any studies that have determined the net benefit of reducing the arsenic at the expense of the nutrients also removed. Thus, the agency does not know whether there would be any overall health benefit from preparing rice with more water.’

Should We Be Worried About Feeding Rice To Dogs?

Several factors suggest our best friends are at an even higher risk from contaminated rice than humans … and worryingly, the FDA are not even looking into the potential for ill-health due to an over-exposure of toxic levels of arsenic in dogs. With no protection coming from the agencies responsible for pet food safety, it is left to dog owners to take on the role of health guardians.

There are many dog owners that feed their pets with rice on a daily basis, either deliberately in a concerted effort to give a natural and healthy diet or unknowingly due to the fact that many processed tinned and dry foods and dog treats include rice in the ingredients. A dog’s body is generally smaller than a human body, and it makes sense to assume even small amounts of arsenic will have a bigger impact. Furthermore, when rice is a fundamental part of a dog’s daily diet, there could be an accumulative effect of arsenic building-up in the dog’s digestive and circulatory systems. There are no regulations that restrict the level of arsenic in rice associated pet food in the USA, the UK or in Europe, which means tainted rice (which will probably eventually be rejected for human consumption) will undoubtedly find its way into pet food through multi-product manufacturing. If profit-hungry and unscrupulous suppliers and manufacturers are legally permitted to use cheaper arsenic tainted rice in pet food products, they will, even if it is common sense to assume it cannot be anything but  harmful to the long-term health of our dogs.

In a bizarre twist, given recent bad-press received through the imported Chinese jerky dog treat scandal … while the USA, the UK and Europe have yet to regulate on this specific subject, the Chinese have beaten them to the finish-line by setting a maximum safe legal limit of organic arsenic in rice at 0.15 parts per billion. This means that while the Chinese cannot feed their own population with homegrown rice that is above the imposed safe arsenic concentration limit, they can presumably (for now) sell it legally to the rest of the world.

Until there are better and safer regulations introduced, the advice given by the FDA and Consumer Reports about the feeding of infants is worth adapting for dogs. Boil rice in at least six parts per volume of water and rinse thoroughly before and after cooking. An infant or a dog eating the same rice-based recipe (including processed treats, tinned and dry foods) on a continual daily basis would likely have a higher level of arsenic in its body. Substituting any regularly fed rice-included products with non-rice alternatives will offer a healthier, more diverse and better balanced diet.

Drinkwell Platinum Pet Fountain 168ozAmazon Price: $69.99 $34.80 Buy Now(price as of Feb 10, 2014)
A fabulous product, offering the opportunity to use fresh, clean and safe bottled water for your dog, rather than water left to go stale in a bowl all day. 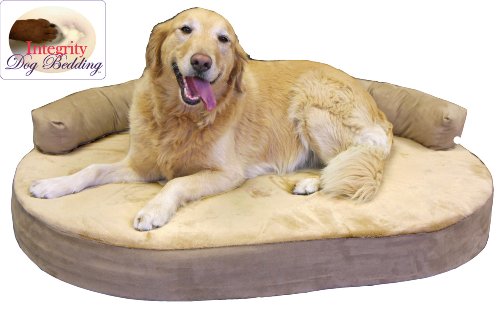 Large Orthopedic Memory Foam Joint Relief Bolster Dog Bed - ToffeeAmazon Price: $155.90 $117.95 Buy Now(price as of Feb 10, 2014)
The ultimate bed for older dogs and those with arthritis or joint problems. Fabulous.
Next >> Doggy Play Pen - Keep Your Puppy Safe - Give Yourself a Break!