Long gone are the days of a secret magical world and heroic boy wizards, famed Harry Potter author J.K. Rowling has moved onto more adult fare. The Casual Vacancy takes place in the idyllic little English town of Pagford who has just suffered the tragic loss of it's beloved Barry Fairbrother. While the town may seem so quaint and peaceful with its classic cobblestone streets, the town residents are at war.

Not a violent war that paves the streets with blood and tears, but one fought in the shadows with daggers in the back. The rich fight the poor, teenagers fight their parents, teachers fighting pupils, and wives war with their husbands. Now that dear old Barry Fairbrother is gone and his city council seat lay empty and new war is about to begin over who lays claim to the supremacy of Pagford.

The paraphrased description above sounds intriguing enough for a decent book, but one would suppose it has to. For J.K. Rowling to break out of the deep rut she has dug herself into as a children's author, she really had her work cut out for her with this novel.

The content of The Casual Vacancy involves rape, child abuse, self-mutilation, drug use, and other various ugly bits of society are all wrapped up in a soft fuzzy blanket of black comedy. This makes it in no way a children's' book. I found myself thinking that the author seemed to be trying to hard to place the darker side of humanity into this book, but I caught myself. Maybe I was being too critical BECAUSE I knew her as a children's' author who filled her books with wonder and made the darkness in the Harry Potter series not seem so dark. Perhaps she was trying to make this shock a little more than Snape killing Dumbledore, or at least shock a little more realistically.

If mayhaps someone who had never read the Harry Potter series were to pick up this book, would they think she was trying too hard too?

Regardless, Rowling really tried to stretch her literary wings with this one. The style of writing seemed borderline Jane Austen at times with the rich adjectives and thick use of a thesaurus.

The plot is decent enough, but everyone seems to agree that it leaves you wanting. The ending is expected and a wee bit disappointing in that way. However, the picture Rowling paints is filled with people, each with a story and intrigue of their own.

The Casual Vacancy is by no means book of the year, but it is not exactly a read to pass up either.The Casual Vacancy is a darkly witty story filled with schemes, all wrapped up in that ugly orange vintage cover. I personally feel that I would have had a vastly improved opinion of this if I had not read the Harry Potter series before this. It's definitely worth a read, but go into it with a more open mind than I. 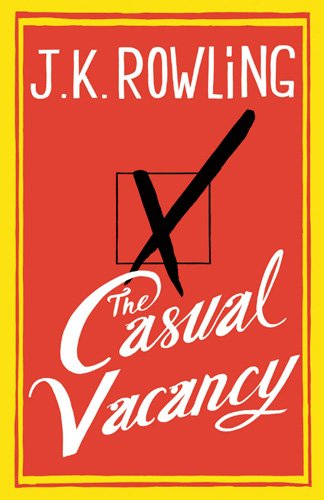