Deborah Diane is a freelance writer from Orange County, California, and the author of a helpful retirement blog:  Baby Boomer Retirement Order Deborah Dian's Kindle books from Amazon or on her blog: "Your Guide to a Fabulous Las Vegas Wedding" "Romantic Budget Wedding Ideas" "The Parrot Trap: A Children's Story" (Gently Teaches Stranger Danger) "The Mayor and the Garbage" (Teen fiction) "Dangerous Lies We Tell to Children and Ourselves" Twitter: www.twitter.com/DeborahDian
InfoBarrel is a writing platform for non-fiction, reference-based, informative content. Opinions expressed by InfoBarrel writers are their own.
InfoBarrel > Travel & Places > Places > Jamaica

The moment you arrive in Jamaica, the vibrant colors of this tropical island will envelop you. Jamaica sits like a lovely emerald in the middle of the beautiful turquoise Caribbean water that surrounds it. The country itself is a jungle paradise of deep greens, festooned with the lavish colors of tropical flowers. Even the citizens of Jamaica favor clothing made from gorgeous, brightly patterned fabrics in intense jewel tones.

Jamaica is an island nation, approximately 145 miles long (234 km) and up to 50 miles wide (80 km). It is located in the Caribbean Sea, about 90 miles (145 km) south of Cuba. The official language is English, and it is still a Commonwealth realm, with Queen Elizabeth II the official head of state. Kingston is the largest city and the capital. It is the third largest island in the Caribbean. Jamaica also lies in the hurricane belt of the Atlantic Ocean, which has sometimes resulted in major storm damage and multiple deaths.

Because of its tropical location, warm Caribbean water, and scenic vistas, Jamaica is a popular tourist destination. Some of the better known tourist attractions are the Dunn's River Falls, the Blue Lagoon, and Port Royal. There are many gorgeous resorts in Jamaica that cater to tourists from all over the world, particularly the United States and Europe.

For those of you planning a trip there, you may want to use this direct Amazon link to: Lonely Planet Jamaica (Travel Guide).  It contains recent information about places to stay, restaurants, interesting tours and other helpful facts to make your trip more enjoyable.

The Arawak and Taino indigenous people came from South America and settled the island between 4000 and 1000 B.C. By the time Christopher Columbus arrived in 1494, there were over 200 villages ruled by tribal chiefs, particularly on the south coast of Jamaica. The native islanders called the island Xaymaca, which means "Land of Wood and Water" or "Land of Springs." These names seem appropriate, as the island is heavily forested and full of natural fresh water springs.

When Christopher Columbus "discovered" the island, he claimed it for Spain. The first Spanish settlement on the island was the town of Sevilla, which was abandoned around 1524, because it was considered unhealthy. The capital was then moved to Spanish Town, in the community that is currently known as St. Catherine. Spanish Town has the oldest Catholic Cathedral on the island.

The Spanish controlled the island until 1655 when the English, lead by William Penn and General Robert Venables, took over the last Spanish fort in Jamaica. When the English captured the island, the Spanish colonists freed their slaves, and then fled the country. Many of the slaves hid in the mountains and lived with the native Tainos, remaining there for generations.

Over the next 200 years, it became one of the world's leading exporters of sugar. This trade was very dependent upon slavery. By the early 19th Century, blacks outnumbered whites by a ratio of almost 20 to 1. However, the slave trade was abolished in 1807, and the British began to import Indian and Chinese workers as indentured servants. Descendants of these Indian and Chinese immigrants still live in Jamaica today.

Over the years, Jamaica slowly gained in independence from the United Kingdom and in 1958 it became a province of the Federation of the West Indies. It attained full independence when it left the federation in 1962. However, it is still a commonwealth of the United Kingdom. It is a parliamentary democracy and a constitutional monarchy. The official head of state is Queen Elizabeth II, who uses the official title of Queen of Jamaica when she visits the country or performs any duties on behalf of Jamaica.

Jamaica has a small but professional military force called the JDF, or Jamaica Defense Force. In recent years, the primary purpose of the JDF has been to assist the JCF, or Jamaica Constabulary Force, in fighting drug smuggling and the high crime rate. The country  has one of the highest murder rates in the world.

The official language of Jamaica is English, spoken with an accent reminiscent of both formal British English, and the soft, almost musical pronunciations of other Caribbean nations. Linguists refer to this uniquely Jamaican speech as an English-African Creole language known as Jamaican Patois. It is widely recognized because of the international popularity of Jamaican Reggae music. Spanish is taught to school children, and about 40% of the population can speak at least a little Spanish.

Christianity is, by far, the most popular religion. The various Christian denominations together account for the religious beliefs of about 2/3 of the population. Much of the popularity of Christianity dates back to the time when Christian abolitionists and Baptist missionaries helped in the struggle against slavery.

The next largest religious group is made up the Rastafari movement. There are also members of the Baha i faith, Local Spiritual Assemblies, Buddhists, Hindus, Jews and some Muslims.

The Cultural Influence of Jamaica

Although a tiny country, Jamaica has had a worldwide cultural influence. Jamaican music, in particular Reggae, is popular in its own right. In addition, the music has also influenced punk rock, rap and hip-hop music.

Ian Fleming, who lived in Jamaica, wrote the James Bond novels there and repeatedly used the island as a setting in some of his books.

After the slaves were emancipated, Jamaica set up a free educational system for its youth, from the primary grades through secondary school. The schools are based on the English grammar school model that is common throughout the British West Indies. The high schools may be either single-sex or co-educational institutions. There are both private schools and public schools in Jamaica.

There are five universities on the island, as well as many community colleges and teacher training colleges.

The most popular local sport in Jamaica is cricket. However, the country is also known around the world for its amazing athletes in the area of track and field. Over the past 60 years, Jamaica has produced dozens of world class sprinters. Jamaica has also produced several world class amateur and professional boxers.

One of the most beloved teams to ever come out of Jamaica, however, was the Jamaica national bobsled team that managed to become a serious contender once in the Olympics. This was a remarkable feat for a country which does not have snow!

Golf is also widely available in Jamaica, but is primarily enjoyed by tourists.

The economy in Jamaica is primarily based on agriculture, mining, manufacturing, and tourism, as well as some financial and insurance services. The leading sources of foreign exchange money are bauxite mining and tourism. Approximately 1.3 million foreign tourists visit Jamaica every year. Jamaica's tropical climate, warm Caribbean waters, abundant golf courses, and luxurious resorts make the island a popular tourist destination.

One of the Best Travel Guides for this Country 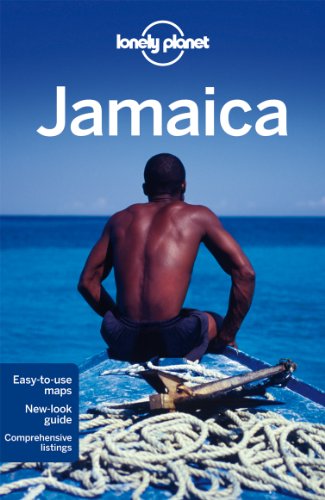 Lonely Planet Jamaica (Travel Guide) Amazon Price: $19.99 $19.50 Buy Now(price as of Jun 17, 2016)
Have all the information you need at your fingertips when you visit this country. Bring along this excellent travel guide.
Next >> Top-Ten Must Dos in Jamaica