I am a retired teacher of English as a second language. I teach on line via Skype, and write on-line articles which reflect my love of travel, language, literature, history and culture. I love writing for InfoBarrel. Why not join me by signing up here: http://www.infobarrel.com/signup.php
InfoBarrel is a writing platform for non-fiction, reference-based, informative content. Opinions expressed by InfoBarrel writers are their own.
InfoBarrel > Travel & Places > Travel Advice

A rarely discussed but vitally important aspect of international travel, especially for ladies, is that most basic of needs, answering the call of nature.

Toilets of the World

In my various travels I have found that using the local facilities can provide fascinating and surprising cultural insights. I have used every kind of facility from "long drop" outdoor privies in the backwoods of Canada to the latest in European and Japanese high tech.

The most basic facility you are likely to encounter in an urban setting in Europe or Asia is the "footprint" or squat toilet. This is a basin set low to the ground, sometimes with a rail to hang on to and sometimes not.

Sometimes you have to be prepared to be creative. When visiting a traditional village in Bali, for example, I used a loo which was lower than a regular toilet but higher than a squatter because it was up on a ledge.  As I looked around for the toilet paper and the flusher I realized that neither had been provided. I did, however, notice a faucet and a bucket. The trick, I realized, was to fill the bucket with water and use it to flush both myself and the bowl.

I have also learned to keep small change handy in local currency because sometimes you have to pay to "go". When I was a child in England. we put a penny in a slot in the toilet door in order to open it, and you can still hear older people in the U.K. using the slang expression "spend a penny" for visiting the toilet.

In Mexico, public toilets are often guarded by ladies who charge you to go and/or sell you toilet paper, and who may also expect a tip. This also used to be common in Europe but these ladies have now been replaced by technology. The process of using a European pay toilet has been automated by the introduction of stainless steel "superloos". I first encountered one of these in Portugal. Although I thought the price of admission was a tad high, I was suitably impressed by the almost surgical cleanliness of the stainless steel interior.

After my husband came out of the Portuguese loo, a local who must have found both his bladder and his pocket were taken a bit short nipped in before hubby closed the door. This caused one of our travel buddies to laugh hysterically because, she told us, the toilet was self cleaning and the unlucky victim was going to be doused with water and disinfectant as soon as the door closed. I wanted to stick around and watch him to emerge, but unfortunately my travel companions dragged me away before I could witness his humiliation.

We laughed hysterically about the Portuguese guy's watery fate.

However, according to this video it may not have been that bad.

When we were camping just outside of Venice, I was amazed to see a long line of Europeans waiting to use the footprint toilet while you could get right into the sit down version next door. I could not really understand this until a friend pointed out to me that those waiting patiently in line were doing so because they thought using the squatter was more hygienic than sharing a toilet seat with countless strangers.

When using public facilities I try not to get too anxious about hygiene, but had to admit that my friend definitely had a good point. When using a public "throne" I am generally in denial about who might have used the seat before me. But in the old UK  "spend a penny" days. my mother taught me to hover over the seat so that I didn't "catch anything nasty" from touching the surface. I thought Mum was a bit paranoid, but have to admit that on the rare ocassions when I have to use a backwoods midden I remain eternally grateful for Mom's hover technique.

Even so, when I made my first visit to an American "can" I was amazed to see that not only did it provide lovely soft toilet paper but also paper toilet seat covers for the squeamish. I decided that this was a bit over the top and that Americans must be more pathologoically afraid of germs than my dear departed mother. But I found the ultimate in germ protection recently in New Orleans airport where the seat was covered in a plastic tube that revolved automatically before and after each visit. 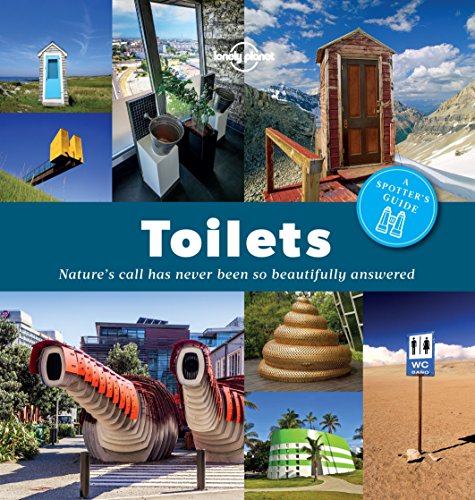 Toilets: a spotter's guide Amazon Price: Buy Now(price as of Mar 5, 2017)
Available in Kindle and paperback

As serious as Americans are about their personal hygiene, they have nothing on the Japanese. This is a country where daily bathing practices consist of preparing to soak in a bathtub full of hot water by scrubbing oneself clean from head to foot in the shower. It is also a country where when you visit someone's home your host provides both house slippers and a separate pair of toilet slippers. You must never wear your house slippers in the toilet, and under no circumstances should you ever wear your toilet slippers in the rest of the house or you will totally gross out your host.

Japan is a fascinating travel destination because it presents the visitor with a rich and fascinating blend of modernity and tradition. This mix can be found in all aspects of Japanese life, including the facilities it provides for answering the call of nature.

Because the Japanese are so serious about personal hygiene they have developed some seriously cutting edge restroom technology. When staying in a hotel room in Japan you are likely to encounter the washlet. This is an electronic toilet which seems to have enough controls to rival a jet plane.

Although it can be used normally, there is a trick to flushing. As a water-saving measure you can create a large flush by pushing the handle one way and a small flush by pushing it the other. The small flush is indicated by the kanji (Chinese character) for small, which looks like a little bird with its wings hanging down.

Credit: By See user in the "File history" section. [GFDL (http://www.gnu.org/copyleft/fdl.html) or CC BY 3.0 (http://creativecommons.org/licenses/by/3.0)], via Wikimedia Commons

However, for the adventurous this space age device can also be controlled by buttons on a control panel worthy of the star ship Enterprise. The toilet is actually a next generation bidet which can be programmed to cleanse various parts of the lower anatomy by adjusting water temperature, speed and direction. Some advanced models even have deodorizers, adjustable nozzle positions, blow dryers, and running water sound effects1.

If you visit a Japanese department store you will be able to check out some more high tech plumbing. Interesting innovations include the ultimate labor saving device, a toilet lid with an electronic eye which lifts up every time someone approaches it.  Another is the heated toilet seat. These are extremely popular in Japanese homes, which are often not centrally heated.

A delightfully ingenious idea is the water-saving toilet tank. This is designed with a small basin indented into the top and a curved pipe behind. When the toilet is flushed, water flows from the pipe into the basin for hand washing before the water flows down into the tank.

In sharp contrast, is the low-tech traditional Japanese option offered in public facilities at railway stations and visitor attractions.

This is a variation on the universal squat style toilet. It is a shallow ceramic basin, approximately two feet long and nine inches wide, set flush to the ground. While this will be no problem for gentlemen, it can be quite a challenge for the ladies. The challenge is to stand  facing the back of the toilet, squat down and balance carefully, hovering in mid-air, and then stand up again. Given that there is often nothing to hold on to, this is quite difficult, especially for people like me who have bad knees.

Fortunately, however, I found out that many facilities with squat toilets also offer a western-style option. This is available in the handicapped toilet, easily identified by this  familiar international handicapped symbol.

And apparently the Japanese are quite tolerant of foreigners with bad knees taking advantage of the handicapped washroom, so you can go ahead and use it without feeling guilty.

Let me finish with a few final words of travel advice. Always be prepared by taking along a small package of tissues, a miniature bottle of hand sanitiser, some pocket change and a sense of humor.