July 2013 emphasized the belief that things are rapidly changing in the world of online revenue earning world. Google has made significant changes that have affected many websites. One of these is my own niche project management site. Adsense revenue has dropped significantly as a result. At the same time, changes have affected other sites such as Squidoo and even Infobarrel. These have combined to further reduce my July 2013 earnings.There was a time when my niche site saw fairly substantial traffic. At the peak, this site would earn perhaps $40 per month from Adsense. In July 2013, the total amount received was only $3.08. June 2013 was $3.48. Although the June amount was very low, it was enough to push my account past the $100 threshold. As a result, Adsense sent a payment on July 24 in the amount of $102. This payment was likely my last for quite some time. At about $3 per month revenue, it will take 33 months to reach the threshold amount again, barring changes. The future for my niche site does not look good. I haven't decided whether to improve it or dump it. According to Google, the ad display format needs some work for optimization. Unfortunately, that would involve a theme change. I'm not sure if the time spent would pay off. I may still do it just to see if Adsense revenue can be salvaged.The July 2013 Infobarrel revenue of $6.87 was actually a little less than June's total of $8.30. I use the new revenue model, rather than Adsense. My account balance is now $37.75 so a payout should be coming in the relatively near future. I have 276 articles on Infobarrel, all of which are in the "Yellow" or "Green" quality areas. When the new quality indicators came out, I had about 6 articles that were in the red. These were edited to boost their scores.Lately, I have put some effort into Bubblews in order to earn revenue. I received a payment in each of the past three months in the amount of $25. A week after my last payment, my account balance is up to $17 again. Another payout in August seems certain. The site does require work in order to earn money. Each time I post, I earn between 40 and 90 cents pretty quickly. You are allowed to post 10 times a day. That would equate to perhaps $4 to $9 per day. In reality, posting 10 times has proven to be more work than I am willing to devote to Bubblews. The best I have done is 8 in a day which resulted in $5 of revenue. Because the site is fairly interactive, if I don't post in a day, I might only earn 10 cents for that day. This is quite different than Infobarrel. Because of other commitments, I have not posted on IB for some time yet I have still earned nearly $15.My Amazon Kindle book sales continue to be a bright spot on the revenue earning scene. In July 2013, I sold ebooks worth a total of $165. This amount is actually less than most other months this year. A bright spot, however, was that I sold another ebook to someone in Japan. This allowed my account to surpass the revenue needed to receive a payment from that Amazon site. Sales on Amazon have been interesting. My books, all written in English, have sold to people in the USA, Canada and Great Britain along with Germany, Spain, France, Italy, Brasil, and of course Japan. Sales to the USA have been highest. In the beginning of the year, German sales were significant. In July 2013, sales to the UK were stronger than Germany. Two different free book giveaways were offered in July. These help to get the ebooks in the hands of potential readers. On the free days, about 100 downloads were made. Almost immediately, people purchased additional ebooks that were priced higher. My portfolio includes two 99 cent ebooks which I frequently give away. These lead readers to my other books which are priced at $4, $6 and $10. By giving the inexpensive books away, it has paid off with additional sales. I have another 99 cent book offered on the Smashwords site. This also leads people to the more valuable books. Plans For AugustAnother free ebook giveaway or two is planned for August. These events are easy to set up with Amazon. On the day of the launch, I update a couple of Squidoo articles which reference my ebooks. This helps to show people that the titles are available for free. I also post notices of the give away on Twitter and forum sites. During August, I will also use Facebook to promote my give away. I hope to release a new ebook in August. This will be a work of fiction, which is new to me. The story line has been written and the planning is in place. This project was actually supposed to be completed in July so it is a month late. Problems with the plot delayed completion. I hope to get back to the project in earnest during the second week of August. The new ebook actually is part of 5 or 6 related ebooks which will comprise a series. Based on an analysis of Amazon sellers, these titles should earn a fair amount of revenue. Time will tell but they should be able to easily earn between $100 and $150 per month.Other ActivitiesMy day job is computer programming. While work was hard to get during May and June, July picked up quite a bit. August seems to be a busy month as well. This will cut into my time earning revenue passively. I also have started a video series on YouTube which could be useful but there is no enough time to do it well. I purchased a video training course which will be helpful for the videos.

This article represents the first I have published on this site in some time. I would like to publish more here but there may not be enough time to do so, unfortunately. 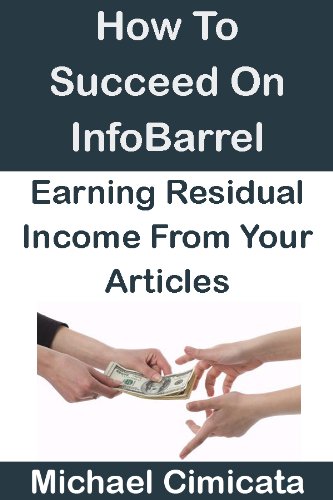 How To Succeed On InfoBarrel: Earning Residual Income From Your Articles Amazon Price: Buy Now(price as of Feb 19, 2016)
An easy to read ebook written by an actual Infobarrel author.
Next >> I Could Write a Book About That! - Researching and Writing a Non-fiction Book