Jeremy Hotz According To RoseWrites

Canadian or know one?

In Canada, we seem to produce some stellar comedic talent - but for some reason, they leave for the U.S. I'm guessing we don't pay them enough to stay here. The first time I saw Jeremy Hotz[1] was at Yuk Yuk's in Toronto (Canada) in July of 2000.

He shuffled out on stage and muttered thanks while rubbing his eye with the palm of his hand (as if he'd just woken up). His low-key intro reminded me a bit of Steven Wright.[2]

Yet after a few minutes of his spiel about how miserable life is in Toronto, I was amazed at the way he concealed his own laughter with his right hand (and yet he was still funny).

Guess you don't really need to hold a straight face all the time to tell a joke. I was in awe.

Then he became much more animated. Every so often, he'd have an intense look which quickly turned to disgust about something - like how in the spring "everything smells like poo." When he tried out new material - I clearly remember how seamlessly he interacted with the audience (and I laughed at his quip about the board game Othello).

Recognized at home and internationally, Hotz

As much as he tries to paint a picture of a miserable existence, Mr. Hotz has been celebrated and awarded for his acting and comedic talent numerous times. Sure, he downplays his script writing - but he wrote for The Jon Stewart show in the mid-90s (that can't be an easy gig).

According to his biography at Canadian Comedians Direct[3], Jeremy Hotz was greeted by a standing ovation in 1997 at the Just For Laughs Montreal Comedy Festival gala. He's appeared on The Late Show with David Letterman and The Tonight Show with Jay Leno.

Here are some more notable achievements:

1997 - Gemini Award for his work in The Newsroom TV show

Jeremy Hotz has also been nominated for several Gemini Awards and has had numerous appearances in movies and television including: My Favorite Martian, Speed 2, The Newsroom, and Married Life on Comedy Central.

He now resides in Tarzana, California and has dual citizenship. Most recently, he's been working on a comedy series titled My Life and a Movie for the CBC network which he created and will star in (so, we haven't completely lost him).

and Jeremy Hotz in Beverly Hills, California at The CFC

Unable to see his live performance?

Enjoy an hour and 13 minutes of Jeremy Hotz at home: 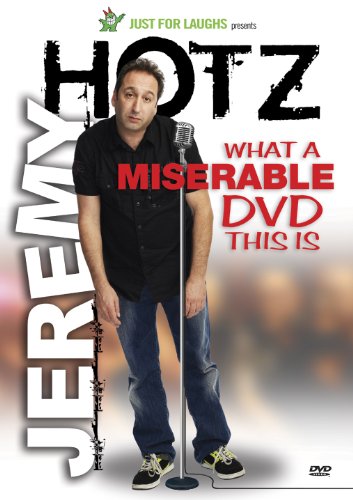 Jeremy Hotz: What a Miserable Dvd This IsAmazon Price: $27.99 $5.99 Buy Now(price as of Jun 30, 2014)
With his signature style of what seems "out of place" in everyday life, Jeremy Hotz knows how to find humor in the simplest things. His observations of American versus Canadian culture is a hilarious segment that any Canadian (or those with dual citizenship) can relate to - see snippet next. Includes behind-the-scenes footage.

A clip from What A Miserable DVD This Is...