Joan Rivers: The Queen Of Controversy

On June 8th, 1933, in Brooklyn, New York, Joan Alexandra Molinksy also known as “Joan Rivers” was brought into the world. She began her work with show business in the late 1950's and early 1960's, and eventually landed a guest position on the “Tonight Show” hosted by Johnny Carson. Joan also had made appearances on other well known television shows such as “The Ed Sullivan Show”, the “Carol Burnett Show”, and “Hollywood Squares”. As the years passed by, Joan Rivers received more and more attention from people all over the globe. Her unique ability to bring joy and laughter to all types of individuals is what made her so admirable and prestigious.

Her fame began to rise to a deeper level as she branched out into the acting world. Millions of people viewed films that she took part in, both on-screen acting and voice acting. Some of these films included “The Muppets Take Manhattan”, “Look Who's Talking”, “Shrek 2”, “The Smurfs”, and “Iron–Man 3.” Some of Ms. Rivers most memorable accomplishments were when she was granted the Walk of Fame Award in 1989, where millions of people have visited her name inscribed in the Hollywood sidewalk. Moreover, Joan Rivers was awarded the “Woman of the Year Award” in 1984 from Hasty Pudding Theatricals, and has been nominated for numerous daytime Emmy Awards throughout the decades.

More recently, Joan Rivers has been recognized for her ebullient role as host of the hit E! Series called Fashion Police, where she has definitely lived up to her name as the Queen of Controversy! On Fashion Police, Joan acts as a fashion connoisseur and style epicure, not only commenting on celebrities' clothing and accessories, but chiming in and ruthlessly joking about their personal lives. The brazen comic has even joked about historical atrocities such as The Holocaust. In an indelible episode of Fashion Police, Joan Rivers took a leap of effrontery by stating a vicious Holocaust comment about German supermodel Heidi Klum while critiquing her outfit. Not to mention that she is of Russian–Jewish descent herself! This caused a tremendous amount of upheaval! Furthermore, Joan River has targeted other A–list celebrities such as Lindsay Lohan, Miley Cyrus, and who can forget, the talentless Kardashian crew!

On a more serious note, Joan has recently gone over the edge by putting her two cents into the Israeli–Palestinian conflict. Ms. Rivers clearly gave her stance on this delicate issue. According to The Epoch Times, Joan Rivers stated Palestinians “Got what they asked for.” This inflammatory comment satisfies her reputation for being labeled as one of the most controversial comediennes of all time.

Unfortunately, on September 4, 2014, it was announced that the Queen of Controversy has suddenly passed away due to complications from a procedure. Some say that her unexpected death is “Karma” for all of the derogatory and racial remarks that she has made, while others are in deep mourning and shock from this tragic event. Despite the array of opinions on this contentious celebrity, Joan Rivers will surely never be forgotten! 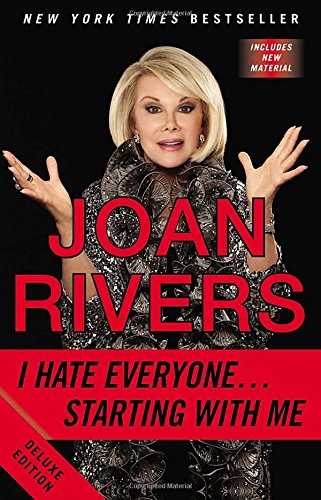