Katamari Damacy.  What can I say?  It's hard to describe this game if you haven't played it before.  It's so... unique.  There isn't any other game quite like it, aside from the other games in the franchise.  The art style, the music, evreything about it is unusual and memorable.  It does have a few flaws, like the voice acting and the occasionally finicky controls, but I'll get into those later.  Let's Just start with the story.

The King of all Cosmos is flying around the sky shooting rainbows out his mouth and who knows what else when he accidentally destroys all the stars in the sky.  So, he asks his son, the Prince of all Cosmos to roll up objects into these magical sticky balls called Katamaris so they can be made into new stars.  That's the story.  10/10.  Oh, and there is also this weird subplot involving this family of cube people or something.  It's weird.  The only problem with the story is the voice acting.  It's some of the worst I've ever heard.  What makes this story so interesting is the King of Cosmos.  He is one of the weirdest, craziest, funniest, most annoying character ever.  He has an interesting design and he says some pretty crazy things.  He is the face of the series, and represents it perfectly.  The only other main character is the Prince, who doesn't have much to him.  A basic silent protagonist, but nothing too special beyond that.

The gameplay of Katamari Damacy is incredibly unique.  You roll things up into a ball, slowly incresing the size of the ball, which allows you to roll up bigger things so you can make the ball bigger.  There are around 16 different levels, each taking place in one of three enviroments:  A house, a town and the world.  Although there aren't a huge variety of places, each level scatters objects around differently, making each stage unique enough.  The goal in most of the levels is to get the Katamari from one size to the next within a set time limit.  For example, a level could have you start with a 30cm Katamari, and get it to 2m in 8 minutes.  These stages each make the Katamari progressivly larger, and they each give you more time.  The other levels all provide you with more unique objectives, such as roll up as many swans as possible or collect the largest bear you can.  These stages are fine, but it's the other ones that are more fun.  The only other problem I can think of in this game is the control.  It's not bad, but it does feel a little awkward and takes some time to get used to.  You're not really controlling the Katamari, but you are controlling the prince who is pushing the Katamari.  It's not a huge problem, but it does take some practice.

One place where Katamari truly shines is its art direction.  The graphics aren't especially good, but the style and direction it takes is amazing.  The game creates it's own little world full of life, color, sound and awesomeness.  This game is a joy to look at.  All the objects look good, and the people and animals are all very funny and interesting looking.

This game is even fun to listen to.  It's got creative sound effects, and everything you pick up makes some kind of sound.  People scream, cats meow, dogs bark and phones ring.  The sound track contains mostly catch J-pop tunes, which are all good.  But the main theme?

Katamari Damacy is a fantastic game, well worth the 5 hours it takes to complete it.  The story is decent, the gameplay is fun, the art direction is fantastic and the sound is hilarious.  If you haven't played this game, and you want a break from more traditional games, this one is definatly worth it.  Katamari Damacy, 8/10 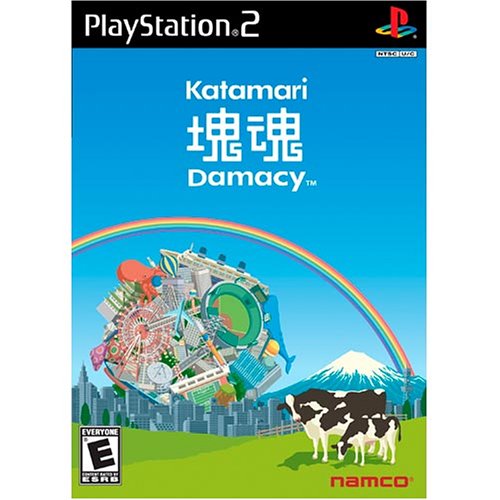