The mountain tapir has been called a 'living fossil' and represents animals which evolved around 55 million years ago. It is regarded as a 'keystone species'. These are those species which are regarded as vitally important to an area; species that have an influence and impact on the ecosystem that they inhabit that would seem out of proportion to their size or population.

The mountain tapir is a keystone species of the high Andes. Because of a relatively inefficient digestive system, many plant seeds pass straight through the tapir's stomach and germinate in the dung of the tapir. This is assisted by the tendency of the tapir to defecate near water. Two plants in particular, the endangered wax palm and the highland lupine, almost disappear whenever the tapir is forced from an area. The cassowary and sea otter are other keystone species that are indispensable in the germination pattern of some plants.

The mountain tapir (Tapirus pinchaque) is the smallest of the four species of tapir. It is also called the Andean tapir or the woolly tapir as it has a thick woolly coat. It is the only species that doesn't live in tropical rainforests. The species name comes from 'La Pinchaque', an imaginary beast which was thought to inhabit the high Andes.

The other tapir species are the Malayan (Tapirus indicus), Baird's (Tapirus bairdii) and the Brazilian (Tapirus terrestris).

The Malayan is the largest and the only species found in Asia. It has short black hair with a large white 'saddle' over the back and rump. Baird's tapir is the largest of the American tapirs and is found in Central and South America. It has short, sparse hair, dark brown in colour. The Brazilian tapir is also known as the South American or Lowland tapir. It is dark brown in colour with a low, erect mane from the top of the head down the neck. 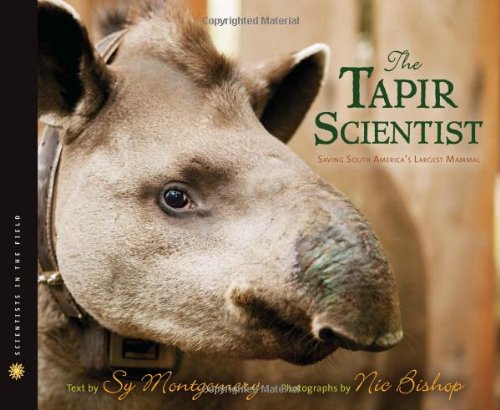 RangeThe mountain tapir is found in the mid- and high-level montane cloud forests and paramo of Colombia, Ecuador and far north Peru. The paramo is that area above the continuous forest line but below the permanent snowline. Elevations of its range are between 2,000 and 4,000 metres.

DescriptionThe mountain tapir stands 0.75 to a metre tall at the shoulder and weigh between 150 and 225 kgs. Females tend to be a little heavier than the males. It is very dark brown or black. Sometimes paler hairs are flecked through the darker fur. The ventral surfaces are much paler as is the area around the anus and the cheeks.

This species can be distinguished from the others by the distinct white band around the lips. There are usually white bands along the upper surface of the ears. The juveniles have blue eyes which change to pale brown as the animal ages. The rump has paired patches of bare skin. The long, woolly fur is most evident on the underside and flanks and reaches a length of 1.4 inches or more.

They have a stubby tail of 5 to 10 cms and the lips and nose have modified to form a long, flexible proboscis. The front feet have four toes and the back feet three toes. The soles are padded and the nails large. A patch of bare skin extends above each toe.

BehaviourTapirs were once regarded as solitary but it is now thought they may congregate at salt-licks and that pairs may travel together. Females have larger territories (over 800 hectares) than males and all mark their areas with dung, urine and by rubbing on trees

They travel easily along self-made paths and are very sure-footed having no trouble navigating dense foliage and the perilous mountain slopes. They are good swimmers and enjoy wallowing in mountain pools. They are generally more active early mornings and evenings, resting up during the heat of the day in an area with plenty of heavy vegetation.

Communication is by bird-like whistles, especially between mother and offspring. It has a keen sense of smell and taste but the eyesight is not so good. It also has sensitive hairs or bristles on the proboscis. 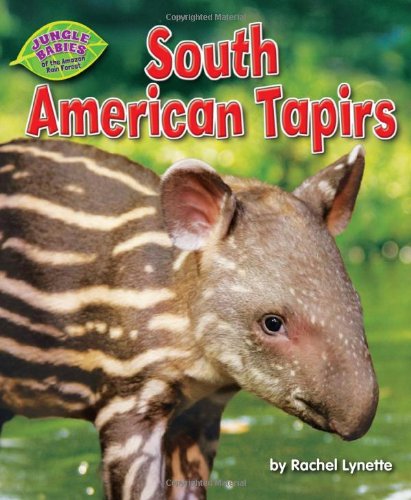 NutritionTapirs are herbivores and eat a wide range of vegetable matter. They also have natural salt licks within their ranges which satisfy any mineral needs. They will rear on their hind legs and grasp leafy branches with their prehensile snout if they can't reach what they want.

ReproductionThe male courts the female by pursuing her with soft bites, grunts and squeals. Female have a 30 day cycle and usually breed once every two years. Gestation is 392 days and a single offspring is usual.

The baby weighs 5.4 to 6.2 kgs and has a camouflage coat of brown with creamy spots and stripes. They also have thick fur. At around three months of age the tapir starts to wean the calf but they stay together for a total of about 18 months. By three years of age they are sexually mature. Tapirs are believed sexually mature at around two to three years old. The life span in zoos and wildlife parks is around 27 to 30 years.

ThreatsThreats to the mountain tapir include cougars and spectacled bears. Jaguars have been known to take tapirs too. Deforestation and poaching are putting great strain on the mountain tapir. Hunting of tapirs has been carried out for years. The meat and hides were utilised and the toes, proboscis and intestines are used in medicines and as aphrodisiacs. Hunting is now less of a problem thanks to local regulations and increased awareness of the animal's rarity.

ConservationThe mountain tapir is protected. It is the most threatened of the four species and has been classified as 'endangered' by the IUCN (1996). Because of fragmentation of its range, the IUCN believes there is a 20% chance that species could be extinct as early as 2014. The mountain tapir needs unbroken stretches of habitat if it is to survive. Numbers in the wild are estimated at about 2,500 and there are only a few breeding pairs in captivity. Those in captivity come from just two animals. Such lack of genetic diversity does not augur well for their continued existence.

The Brazilian tapir is listed as 'vulnerable', the Baird's as 'endangered' and the Malayan as 'vulnerable'. Let's hope all species of this interesting genus manage to live and enchant us for many more years.