“Everything in life is writable about if you have the outgoing guts to do it, and the imagination to improvise. The worst enemy to creativity is self-doubt.” â€• Sylvia Plath, The Unabridged Journals of Sylvia Plath Be fearless. Start writing today for Infobarrel and make $$$ while you're at it.
InfoBarrel is a writing platform for non-fiction, reference-based, informative content. Opinions expressed by InfoBarrel writers are their own.
InfoBarrel > History > Medieval History We know all about the famous (or infamous) King Henry VIII and his six wives, but what about his son, King Edward VI? Stuck in the reign between his famous father and older sister, “Bloody Mary”, the boy king is less publicized. However, his reign represents a time of chaos and instability, a time of great religious reformation for England. If you want to learn what became of the king who never grew up, then read on.

Edward was born on October 12, 1537 in Hampton Court Palace. He was the son of King Henry VIII and his third wife Jane Seymour. The kingdom was ecstatic at his birth, as the male heir would one day rule on the throne of England. Needless to say, King Henry was beyond happy at the news. It had not been an easy task for the king to have a firstborn son.

Initially, Henry was married to Catherine of Aragon. Despite their efforts, however, Catherine had suffered from miscarriages and could only produce a girl, Mary. After nearly two decades, Henry grew frustrated with Catherine’s inability to bear a son for him and began to look elsewhere. Catherine’s lady-in-waiting, Anne Boleyn, caught his eye, and eventually he banished Catherine from court and married Anne. She, too, could not bear him a son. She delivered a baby girl, Elizabeth, and suffered a couple miscarriages. Henry eventually had her executed on charges of adultery and incest.

During his marriage to Anne, Henry had been having an affair with Jane Seymour. Shortly after Anne’s execution, he married her. She gave birth to their son Edward, much to Henry’s relief. However, she soon fell ill and died from postnatal complications. Henry expressed his feelings to King Francis of France, writing: “Divine Providence…hath mingled my joy with bitterness of the death of her who brought me this happiness.”

Edward was a young boy who was given all the luxuries of royalty. He was placed under the care of women, as typical of the fashion of the day. His father Henry demanded that his household be clean and have high security to protect his son’s health, although Edward was never particularly healthy nor strong. The prince was given many toys and comforts, including a troupe of minstrels.

The boy was proficient in many languages, including Latin, Italian, Spanish and French. He was well-taught in mathematics and music as well. From early on, it was clear that he was highly intelligent. It is most likely that he was educated as a reformed Catholic.

Edward was adored by his elder sisters, who lavished attention onto him and gave him gifts. His childhood playmates consisted of the sons of nobility, including Barnaby Fitzpatrick, a lasting friend. However, Edward was a devoted student, committing himself more towards his studies than playing with his friends. As a youth, Edward knew his duty to the kingdom and took a fascination with the art of war, like his father.

Ascension to the Throne

On January 28, 1547, Edward’s father, King Henry VIII died. His death was announced on January 31, and proclamations of Edward’s succession were made. His uncle Edward Seymour was named as his Protector. King Henry was buried by his third wife Jane Seymour at Windsor, since she had given him the son he had always wanted. On February 20, Edward was crowned at Westminster Abbey at the age of nine.

King Henry had established a Regency Council to rule collectively on his son’s behalf while he was a minority. Nevertheless, Edward’s Uncle Seymour, Duke of Somerset, took almost full rule, agreed upon by the executors. Seymour’s role was reinforced by his military successes in Scotland, having punished the Scots for failing to live up their promise of betrothing Mary, Queen of Scots to Edward.

Seymour and the archbishop of Canterbury, Thomas Cranmer, focused on making England even more Protestant. Edward himself was staunchly in support of this. Consequently, the Book of Common Prayer was introduced in 1549. In response, the Catholics of the West Country protested against the Prayer Book, leading to rebellions.

Ultimately, Seymour was unable to effectively manage Kett’s rebellions against land enclosures in Norfolk. The rebellions against injustices done were put down by John Dudley, Earl of Warwick. Edward Seymour, on the other hand, relied on being Edward’s favourite uncle and was busy trying to keep his own brother, Thomas Seymour, from gaining power. Little did he know that King Edward himself would lead to his downfall. Thomas Seymour was eventually beheaded for treason, and Edward soon followed in his brother’s footsteps, executed for scheming to overthrow Dudley, Somerset’s successor. Edward notes in his journal: “The duke of Somerset had his head cut off upon Tower Hill.” Dudley became Duke of Northumberland. Under his regime, he pushed Protestant ideologies and beliefs further. By early 1553, Edward became ill, undergoing a series of improvements and relapses, until it became clear his condition was beyond repair. Northumberland was determined to keep England Protestant, so he persuaded Edward to pass succession onto Lady Jane Grey, his first cousin once removed. Edward himself was opposed to Mary’s succession because she was a staunch Catholic like her mother. He was also against passing succession onto Elizabeth because of his beliefs in legitimacy and male inheritance. Similar to his father, he drafted a document called “My device for the succession”, where he determined succession would pass over his sisters and go to Lady Jane Grey in the case he had no male issue.

Edward died on July 6, 1553 at the age of 15 due to tuberculosis. The throne was passed to Jane Grey.

It is sad to think of Edward as a young king with so much potential that was unrealized. From his short life, it was clear that he was intelligent and starting to grasp the complexities of government. He could also be emotionally detached, ordering the beheading of his two uncles to protect his throne.

Nevertheless, Edward had played a big part in cementing the Church of England through the English Reformation. In his father Henry’s late reign, there was some shifting back to Catholicism. However, Edward had supported acts that would make England Protestant. By the time his sister Mary became queen after Jane Grey, the reformation had gained too much momentum and couldn’t be stopped. 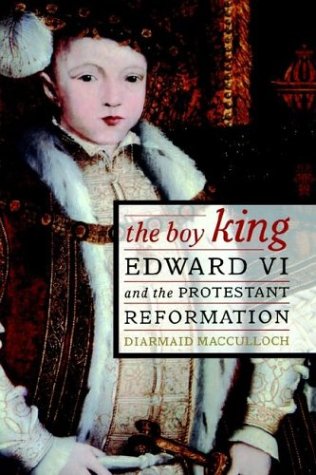 The Boy King: Edward VI and the Protestant Reformation Amazon Price: $65.00 $20.00 Buy Now(price as of Sep 19, 2016)
If you want to learn more about King Edward's reign and his impact centuries later, check out The Boy King.
Next >> Surprising Life Choices for Women in the Middle Ages