Kingsman: The Secret Service (2014) is the story of a secret spy organization, based on a comic book written by Mark Millar, comprised of highly trained superhero-like agents. The feature film only borrows a few of the original concepts. Comically, the film casts Mark Hamill, famously known for Star Wars, as an abducted character in the beginning of the film. This plot element is similar to that of the comic book in which Mark Hamill is an actual character abducted by a terrorist group. The narrative in the film revolves around a young man named, Eggsy, played by Taron Egerton. We learn that his father sacrifices himself to save his team during a secret service mission. Harry Hart, played by Colin Firth, is one of the team members saved by Eggsy’s father’s sacrifice.

Seventeen years later, Hart needing a replacement for one of the recently killed agent members meets Eggsy and decides to recruit him into the secret agent organization. Eggsy has to go through a rigorous training and selection process that he is able to pass with flying colors until the final test. The last test, which he fails, required him to kill the dog that he was given to take care of at the beginning of the training process. Meanwhile the evil genius Valentine, played by Samuel L. Jackson, comes up with a diabolically creative way to exterminate the majority of the human race and only keep the people he chooses alive. He does this by sending out a frequency, through cellular devices he gave out for free across the globe, which makes people uncontrollably aggressive and are compelled to kill one another. Basically this would cause the entire population of the planet to self-annihilate.

Colin Firth and Samuel L. Jackson are the two big stars of the movie—one playing the hero’s mentor and the other portraying the villain. Colin Firth gave a good enough performance in general and was surprisingly impressive in the fight sequences, specifically during the fight sequence at church. Regardless of whether the sequence was performed by a stunt double or CGI, it got the job of blowing away the audience done; a very entertaining scene. I’m a big fan of Samuel L. Jackson and I’ve specifically watched movies just because he starred in them and I will do so again. Unfortunately, his performance in this movie was disappointing. I believe the character wasn’t developed enough for a Samuel L. Jackson performance. You don’t end up with the usual feeling of satisfaction you normally have after watching one of his performances. Taron Egerton and Sofia Boutella, did a good job as well. Boutella, specifically, played a very disturbing and believable henchwoman to Samual L. Jackson’s character, Valentine. One of the most impressive and noticeable aspects of the movie was the directing. At certain moments I was thoroughly impressed. I would suggest that any filmmaking fanatics, like myself, put this on their must-watch movie list. What really caught my eye was the POV-style shooting in certain shots of the fight sequences. This is something I haven’t seen before in a film. For this I applaud Mathew Vaughn on his directing.

Although the storyline was interesting enough, it did seem a little too hurried. It seemed as though there were too many elements to the storyline being packed together into one film. That being said, it did keep me interested enough to want to watch it to the end. An unexpected ending is something I always look for in a movie. Which Kingsman: The Secret Service very much delivers.

To conclude this review, I give this movie a 3 / 5 stars. I would recommend you watch this movie but only if you really have nothing better to do. 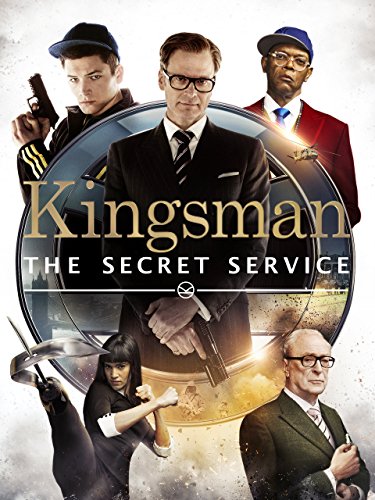