Check out my throwing knife reviews blog. Thanks for reading!
InfoBarrel is a writing platform for non-fiction, reference-based, informative content. Opinions expressed by InfoBarrel writers are their own.
InfoBarrel > Entertainment > Hobbies

Knife Throwing: How To Throw The Straight Throw

Knife throwing can be a mental relaxation method, something to do with friends for entertainment, a competitive sport or a way to defend yourself. It's a practical thing to know and doesn't really take that much effort in order to be sufficient enough to stick something on the wall from across the room if you need to. Not to say you'd want to throw a pointy object at your living room wall, but hey, there are times when you need to be a little Jedi in order to get something done quickly.

I've been throwing things since I was young. Spears, knives, screwdrivers, ninja stars and other things. But I didn't really get into throwing on a serious level until a short while ago. Now I would like to share my knowledge since I've found this to be a really rewarding, relaxing thing to do. I plan to write several articles on various throw types in the upcoming future. I'm not a master, by any means, but I have put a lot of time and practice into knife throwing.

I've dubbed my knife throw, "straight throw", which other people call the "no-spin throw" or some call the "thorn style throw". I call it this because it makes more sense; and especially as your index finger is pointed straight at the target while you throw the knife without spinning it in the air.

The idea behind this throw is that your index finger adds pressure on the handle as the knife leaves your hand. This creates a counter-spin to the spin of you throwing the knife by the handle and that stablizes the knife's flight so it flies straight through the air to the target.

Here are some simple directions:

Here is a picture of a throwing knife being held in 1st person as if you, reader, were holding the knife. You should be able to hold your knife up and replicate where my finger positions are. Remember, your index finger should be rigid.

This picture below indicates all the fingers from a back and over-the-top view of the hand holding the throwing knife. Notice my ring and pinkie fingers off to the side and out of the way.

You are going to want to give the throw some force, but not much. The momentum of the knife racing through the air toward the target is sufficient for it to stick in so just throw it with an upward arc instead of falsely thinking it will actually fly perfectly straight. Many people start out by throwing extremely hard, but haven't developed control yet. That ends up making the knife fly through the air weirdly and bounce off the target.

Combine all the steps mentioned above in Prepping The Throw and release the throwing knife like this:

Some End Notes and Tips

A good method of learning this straight throw is to throw very daintily at a 2 x 4 piece of wood from about 4 feet away. Don't throw it hard because it will hurt you when it comes bouncing back in your face like an angry hornet. Instead practice throwing the straight throw like you are flinging something off the tip of your index finger very lightly. It should stick in every time and teach you a lot about the throw.

The farther back you stand from the target the more you will need to fling the knife upwards. Like a rainbow to the target. This compensates since this throw is a half spin throw technically.

Try a left-handed throw. You might be surprised how well you can do it if you follow these steps. A lot of people throw knives like a baseball and it seems that our arm is trained to automatically throw like that. Muscle memory perhaps. Using the left hand to throw a knife can seem very awkward, but your left arm's baseball throw muscle memory isn't the same as the right arm. You might be surprised how easy it is to throw left-handed.

Now you know how to throw a straight throw. Thanks for reading and be sure to check out my knife throwing blog in my signature link! 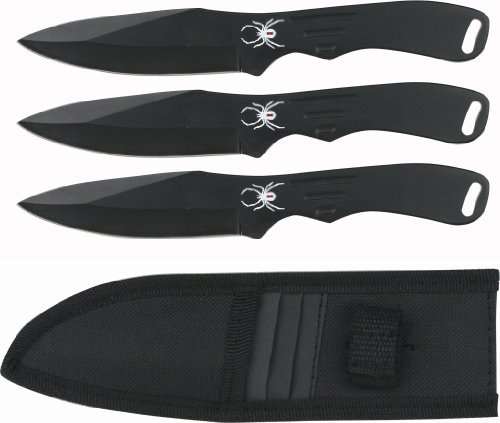 BladesUSA RC-1793B Throwing Knife Set 8-Inch OverallAmazon Price: $8.00 Buy Now(price as of May 21, 2014)
I like this knife best for the straight throw (a.k.a "no spin throw"). The back of the handle is straight enough, but with a slight curve so the knife leaves the finger generally the same every time after some training. It has some weight to it so it really thuds into the target like a heavy knife would. It's long enough for my big hands at 8 inches and has some room to slid as I throw it. I've suffered this knife tremendous abuse for about 2 months now; almost daily. It's taken a toll and has some small chips out of the blade. But I haven't sharpened or repaired it at all and it still flies true. This knife was pretty easy to pick up for me. I was able to calculate the distances between throws and get it to stick fairly consistently. Then, after I discovered the straight-throw, as I call it, I really dug these knives. I can consistently get 2 out of 3 stuck in the target if not more. It gets a little more challenging farther out there from about 20+ feet, but that's all part of the fun now. Closer ranges are a piece of cake, well, for me at least. It feels really good to throw knives without having to always pickup ones that miss! :) Today I walked out to my knife range and took aim. All three of these sunk into the main target from about 15 feet away my first try. I'm getting good, but still so much to learn! FriendlyDan, Out 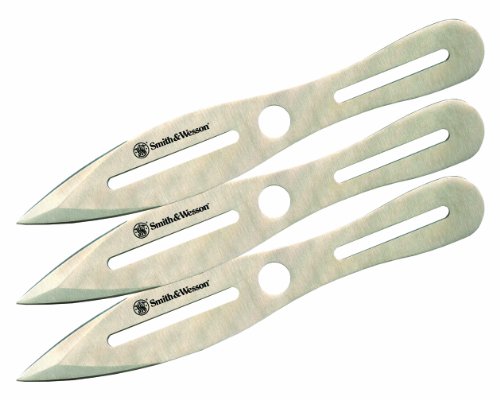 Smith and Wesson SWTK10CP Throwing Knives, 10-Inch, 3-PackAmazon Price: $29.99 $22.82 Buy Now(price as of May 21, 2014)
So right off the bat when I got these knives I was like, "Whoa, this is heavy!". This knife is the real deal in regards to the serious thud it makes when it hits the target. I started off with my Straight Throw method and surprised myself with two out of three hitting and sticking from 7 feet away. I walked backwards several feet and threw again. This time all misses, but I knew this was going to be something worthy to write about. I could feel it in the knives. My Straight Throw was dead-on after 30 minutes or so of training. I could get all to stick in consistently at ~10 feet away. Going back further took me another hour or so before I could manage to stick 2 of the 3 in consistently at 20 feet. I'm just not good enough yet to throw any blade well that far yet, but I am learning and improving, I feel. The balance seems blade-heavy, but the whole shape in comparison with the circle in the middle throws one off when looking at it. The middle point is a little higher than one thinks. When you hold it then your hand adjusts and you hold it more in the middle. The back of the handle on both sides is very flat and smooth. While doing the Straight Throw enough with these, one can easily begin to feel the effect of the index finger's pressure on the handle as it leaves the hand. Holding the knife a little higher seemed to be the best for me. I place my index finger's tip on the edge next to the "B" in "Bulls-eye". You can't see that in this picture because it is on the other side of the knife. When I throw it then I flick my wrist (and stiff index finger) in a downward motion, but sometimes I give a little with my index finger when I feel like the knife should get some extra or less motion. The middle grooves in this knife are there for weight, I assume. Perhaps one could develop a throw involving the sliding of the finger down the grove, who knows. These knives seem to do require force in order to get them to stick with the Straight Throw. It's a work-out for me, and I like that, but for some people they might be too heavy. A nice hunk of metal! My 10 year old son worked on these for a bit with the Spin Throw. He was getting excited as he kept getting them in at least one of three most throws. ;) These came with a nylon sheath to hold all three in cascading format. The sheath has a belt loop which is handy when you need to walk a ways to your range. I'd recommend these to beginners and experts. Pretty inexpensive for a good solid throwing knife that is easy to stick.
Next >> How to Become a Certified Skydiver