Lateral Hostility and the Transgender Woman

Are you a transgender women who has experienced hostility from the transgender community? I would dare to say that a lot of transgender women have been the victim of bullying and pigeonholing into the brutally enforced “hierarchy” of transgender women through cyber-bullying, ostrification and deadly gossip. I use the word deadly because I believe that this behavior is directly related to the skyrocketing transgender suicide rate. We don't we just add to the suffering and feeling of isolation that most of us feel. Some of us take their own lives; could this hostility among trans women be a factor? Perhaps something to think about the next time someone is being persecuted by our very own. We are doing it too ourselves people! It has to stop if we are going to get anywhere in society as a group of oppressed people. I asked my doctor about this phenomenon and he simply relied “it's called lateral violence”; he continued “when a group of people are singled out and ridiculed in society and have no place to put the anger and frustration they feel so they put it on the closest people to them who are on the same social rung as themselves".

It kind of makes sense to me but it does not explain the competition over hormones, surgery and boob size, etc. Do trans women bring the competitive nature of men with them when they transition? It would appear so. A pecking order does exist and in my experience with trans groups is that most of the time is spent attacking each other. And why no cross talk in trans support groups? Perhaps that would help. There is a rather offensive joke that I have heard about trans women; "you're not trans unless your insulted five times a day". I was offended, for the fifth time that day. But then I thought about it I realized that sometimes jokes point out things about ourselves that we don't like. We are offended, and often. We form little "cliques" and attack other trans women, forcing them out of support groups and ostracizing them even further from any kind of support we may offer as fellow trans women. Its so sad, can you imagine what we could accomplish if we worked together?

Lateral Hostility or violence is a term describing physical, verbal, or emotional abuse of an individual by a person or persons with the intend of doing emotional and mental harm. Backstabbing, scapegoating,verbal attacks or non verbal attacks like rolling your eyes or sopping or spreading unfounded rumours. This happens constantly on the internet and it is a crime called cyber-bullying! How many transgender women have experienced this? Not only lateral hostility in the support groups but over the internet as well.

Why do we do this? Why do we internally proclaim I am "trannier than thou", and I am going to make you aware of it at all costs. This does not go far enough to explain why so many good heart-ed people end up in brutal fights; e-hair pulling, e-scratching and biting! Forming groups of "she is my friend so go away", no "she is MY friend so you go AWAY!", simply by having a difference of opinion over anything even mildly controversial. Everything IS a personal attack. the words "I disagree" is an act of WAR!!. Does the dysphoria make us closed to new ideas and points of view? Does it make it an imperative to be right no matter what the cost in terms of friendships and heartbreak? Could it be the dysphoria which causes us to put each other down over size of body parts and size of shoe? I dress more like a woman than you do, are you on hormones? Are you ..post-op? It's not a race, it's not a competition to out transition every other transgender woman you come in contact with. But this seems to be the attitude you run into.

There are some key characteristics of lateral hostility that you can watch out for:

There are also stages to the violence:

Some of the many forms of lateral violence:

Tools to stop it:

We don’t have to go on this way, we can get along if we just let go of these things and come together as a group of people facing the same oppression everywhere we go. Can you imagine what we can accomplish if we all stand together? We have enormous talent, skills and education to offer society and it is about time we got together and let them know it! So please do not fall into the lateral hostility trap. Do not perpetuate it and avoid the people who try to make you a victim. If we all work together on this we will be miles ahead of the game! 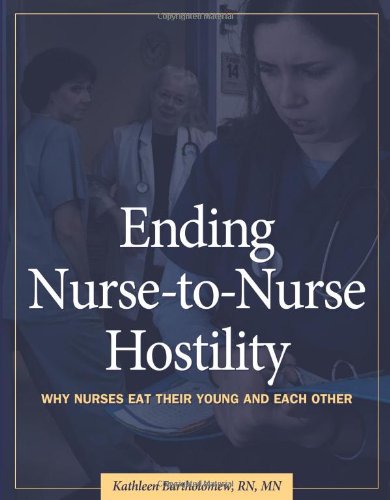 Ending Nurse-to-Nurse Hostility: Why Nurses Eat Their Young and Each OtherAmazon Price: $69.00 $66.23 Buy Now(price as of Mar 29, 2014)
Next >> How to Infuriate Professional Musicians