I hope you enjoyed this article and find the craft activity entertaining for your children (and yourself!). Please feel free to email me at terratradestudios@yahoo.com if you have any questions or comments. I'd love to hear from you!  The article you are reading contains abbreviated craft instructions. For a more detailed tutorial, please visit my website. Thanks!
InfoBarrel is a writing platform for non-fiction, reference-based, informative content. Opinions expressed by InfoBarrel writers are their own.
InfoBarrel > Lifestyle > Pets & Animals > Birds

Learn and Create: Attracting Owls to Your Backyard

This series of articles will encourage your children to learn and create with a partnership of nature topics and craft projects kids will love.

Have you ever awoken at night to the sound of a hooting owl? Have you ever felt yourself shudder after hearing the eerie screech of a barn owl (if you have, consider yourself lucky…they’re endangered in many states)? If you answered “yes” to either of those questions, you’re not alone. Many people in both cities and rural areas experience the wonder of hearing an owl

But what do we know about these elusive night-dwellers? It’s rare to see an owl during the day, but not because they aren’t around. They tend to blend in very well with their environment. As a result, people go about their days without ever noticing those fluffy camouflaged predators resting quietly in the trees above them.

The Past is the Past

Owls are some of the most unique and proficient birds in the world. In fact, Planet Earth boasts over 200 species. Unfortunately, they are also some of the most misunderstood animals as well. Everyone knows the old wives tales…

These may be popular ideas, but not a single one is true. Owls cannot twist their heads around

Credit: www.pixabay.com 360 degrees (only about 180 degrees in either direction), and they are not very intelligent animals. In fact, an owl’s brain is quite small. In the past, owls were associated with death and witchcraft. Today, we know better. These unique birds may not be very smart, but they are extremely efficient predators that have developed special adaptations to help them along the way.

One early summer evening years ago when I was a state park naturalist, I presented an educational program about owls at the amphitheater in the park’s campground. I set up the program in advance of the audience arrival, and made sure I had plenty of time to go over my notes. My early preparations had another purpose as well…I wanted to call an owl to the campground.

Being a novice naturalist, I wasn’t as confident in my owl calling skills as I am today, so I played a tape recorded call on a loop for several minutes. As I reviewed my notes and made preparations, I heard a live bird respond to the tape. I waited and listened. Minutes ticked by, and the guest of honor moved closer and closer to the amphitheater. I turned off all the lights, choosing to wait in the waning light in hopes he would be drawn in by the relative safety of the evening shadows.

I didn’t have to wait long. Before I knew it, the owl was calling from just beyond the back section of the amphitheater. I risked turning on my flashlight and slowly panned it through the trees behind the last row of seats. To my surprise, I found him!

Perched gracefully on an upper branch of an oak tree was a barred owl, one of the most common species in the Midwest. He stared passively at me, drawn by the beam of my flashlight. After apparently deciding I was no threat, he turned his head slightly and cocked it downward in the direction of the tape recorder that continued to utter that famous barred owl call: “Who cooks for you…who cooks for you all?”

The visitor remained in the tree throughout the evening’s events, refusing to budge even after I cautiously walked to the back of the amphitheater and turned off the tape player. My audience was utterly amazed by his presence. I was sure he would fly away during the short video portion of my program, but instead he sat stoically through the entire presentation. In fact, I was the last person to leave the amphitheater, and he was still there when I walked away.

That encounter allowed me to get a close-up look at one of the world’s most magnificent predators. Learning to call an owl to your own backyard is not that difficult, but it’s best to know a few key facts about these unique raptors before you do.

An owl’s feathers are specially designed to allow air to pass through the fringes quietly so they can effectively sneak up on their prey. As a result, when an owl flaps its wings, only the slightest sound is heard. This advantageous adaptation is only seen in this particular species of raptor. Couple that with the bird’s extremely light weight (the heaviest species is only 4 pounds on average), and you have a truly efficient body design for a predator.

Credit: www.pixabay.comOwl eyes are extremely sensitive to low light conditions, meaning they can see fairly well in near darkness. These quiet predators are farsighted and see things far away much better than those up close. They are capable of seeing during the day as well, but prefer to keep their eyes only slightly open so the sun isn’t so blinding. Because of the way their eyes are designed, closing them halfway still allows the animal to see the ground below him. If we were to have eyes comparable to an owl’s, they would need to be as large as softballs to be a proper representation!

An owl’s ears are primarily internal, having only a small hole buried under feathers as evidence the ears exist. The tufts of feathers we see on the tops of some species’ heads (such as the Great Horned Owl) are not true ears. Even without visible ears, this magnificent bird can hear a mouse in the grass at a distance of 100 yards. That’s the length of a football field!

An owl’s ears are so sensitive, some experiments have shown they can locate and capture prey blindfolded in total darkness. They are able to do this because of the placement of the ear holes. One hole is slightly higher than the other so the animal can pinpoint an object’s location based on when sounds arrive at each ear. A mouse’s squeak might be heard by one ear and then again a split second later by the other ear, which allows the animal’s brain to compute the distance to its prey more accurately.

Owls use all of these special characteristics to hunt and move through the dark night. Their prey consists of mice and other rodents, insects, snakes, and even bats, which they can sometimes snatch out of the air. Once they’ve captured and eaten their prey, owls regurgitate the bones and fur rather than waste precious energy trying to digest those bits any further. Try searching around the base of a large tree in your yard or neighborhood for these owl pellets. If you’re really adventurous, use a pair of tweezers and toothpicks to examine the contents of the pellets.

Now that you know a little bit more about this bird’s lifestyle, try calling from your back porch one evening. You might be pleasantly surprised at the result. Even if you don’t have luck with your call (keep trying…it takes practice), you can still create your own crafty owl magnet with the simple project below.

I hope you enjoyed this article. Learning and creating with your kids is always a fun way to engage the entire family. I've often found that family activities such as traveling, gardening, visiting a local park, and going to the zoo are great ways to encourage family bonding and connection. I encourage you to get outside and share the excitement and wonder of discovery with your children. Your life (and theirs) will be richer for your efforts. Enjoy! 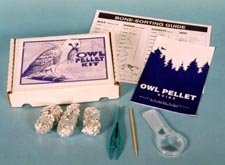