I was jamming to Miguel's chorus in Wale's song, Lotus Flower Bomb, when the thoughts sprang into my mind: What exactly is a lotus flower ? Why are they so popular?

Nelumbo nucifera is a symbol of abundance year after year in the Asian culture. Buddhists also see it as a emblem of purity and fruitfulness . Reason being it would be seen as this is because the lotus flower has many seeds.

Voyage From The Past

"Long before the classical Hindu scriptures wrote of the lotus, the lotus was an important symbol in Egypt. In fact, the lotus may have come to India from Egypt. It was associated with the sun because it opens in the morning and closes at night. Horus, the sun-god was often depicted sitting on a lotus (like Buddha and Brahma). The lotus was also the flower of resurrection, used in funeral rites and depicted on tombs. Mourners would pray that the deceased would have the chance to bloom again, "like a water lily reopening."

The water lily appears all over the tomb of King Tutan-kamen which was built in 1361 BC. Water lilies adorn the tops of columns. The oar King Tut is using to row to the land of rebirth is made in the image of a half-open water lily. A beautiful woman who resembles Cleopatra offers the water lily she holds in her to another woman to sniff.

A Dakota legend tells about the origin of the yellow pond lily common in North America. A Star Maiden came down from the night sky and wanted to live with the Dakota. The chief, Red Strawberry Man, sent his son with the maiden to consult the tribe's advisor who lived across the lake. While rowing across the lake in the darkness, the son's canoe hit a log and the Star Maiden tumbled into the waters. In the morning, the first yellow water lily appeared at the same spot."( Fitzgerald, 2003)

Lotus Flower In The Wild

Lotuses can grow in the wild in murky and muddy water. Lotuses can even grow in fairly dry conditions. 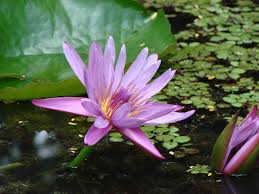 Profile of a Lotus

"For the water garden, lotus likes shallow water and will typically be sold in its own tub that can be placed in your water garden pond with just enough water over it to cover the container. When the lotus is in blooming stage it can be fed frequently for better performance. Blooming stage is when water is typically around 60F or higher. Because of its height it might be better to place the lotus on the far side of the pond if the conditions are right, so it does not block the view of the pond. If protected from freezing your lotus should act as a perennial for your water garden. If it is very happy and left unchecked it can actually be pretty aggressive and maybe even grow a lot more than you may want."(Gannon, 2012)

The next time you walk by a lotus flower, give it a second look! Whisk it away from the water if possible! Lotus flowers have more uses than you think.