Lou Gehrig is one of the most well-known names in baseball history. The first baseman for the New York Yankees, Gehrig was the first professional player ever to have his uniform number retired. He was signed by the Yankees after an impressive college career at Columbia University, where he also played football. He joined the Yanks for the first time on June 15th, 1923 as a pinch hitter, and became their everyday first baseman in 1925.

Credit: By Greenreaper13 (Own work) [CC-BY-SA-3.0 (http://creativecommons.org/licenses/by-sa/3.0)], via Wikimedia Commons

Over his 17 year career, all with the Yankees, Gehrig posted impressive numbers.  A career .340 batter, he hit 493 home runs s (27th All-Time) and had 1995 Runs Batted In (5th All-Time).  His slugging percentage, (.632) is the 3rd best in Major League Baseball history, after Babe Ruth and Ted Williams. He was named the American League’s Most Valuable Player twice, in 1927 and 1936, and is one of only 16 players ever to win the Triple Crown, which he won in 1934.  Gehrig appeared in 7 straight All-Star games and was a key part of the dominating Yankees teams of that won 6 World Series titles in 11 years.

Arguably Lou Gehrig’s most impressive accomplishment, and certainly his most well-known, was his streak of 2130 consecutive games played. To put that into better context, there have only been 31 players in the history of baseball who have managed to play 500 games consecutively, which is a feat in itself.  Gehrig’s streak was more than four times longer.

Credit: National Photo Company Collection, Library of Congress, Reproduction Number: LC-DIG-npcc-14209 See page for author [Public domain], via Wikimedia CommonsGehrig’s run started in 1923, with a pinch hit appearance. It ended May 2nd, 1939, when he took himself out of the lineup because he was playing poorly, and he didn’t want his performance to affect the team as a whole. The streak--at one time thought unbreakable--spanned 14 seasons, stood for 56 years, and earned Lou the nickname “The Iron Horse.” Gehrig’s streak was finally broken in 1995, by the Baltimore Orioles’ Cal Ripken, Jr.

During the 1938 season Gehrig began to struggle on the field. He would make clean contact, but the ball would not jump off the bat like it had in the past. He could no longer hit for power, and had also noticed that he was getting more tired than he had previously. He was having trouble making plays in the field, his base-running suffered and his batting average plummeted. He finished the 1938 season and played for part of 1939 before removing himself from the lineup, as it turned out, for good.

By June of 1939, Gehrig was getting progressively weaker every day. His wife arranged an appointment for him at the Mayo Clinic. After almost a week of tests, Gehrig was diagnosed with amyotrophic lateral sclerosis, also known as ALS. The prognosis wasn’t good. Gehrig was told that he could expect to continue to lose strength, and that he wasn’t likely to live much longer.

ALS, now often called “Lou Gehrig’s Disease,” is a disease that attacks the nerve cells in the spinal cord and brain. As these cells get weaker, signals between the brain and the rest of the body become more erratic. This leads to loss of strength and coordination, and as time goes on, can cause a person to become completely paralyzed. There is no cure for ALS at this time, but research continues, and there are forms of treatment which can slow the progression of the disease.

The Yankees announced Lou Gehrig’s retirement on June 21st, 1939, two days after announcing his diagnosis of ALS.  On July 4th of that year, between games of a double header, Lou was honored at Yankee Stadium.  He was honored by his teammates and coaches, baseball’s leading dignitaries, his fans and his opponents, Yankees’ Stadium’s staff: pretty much everyone.  After Manager Joe McCarthy and teammate Babe Ruth spoke, Lou addressed the crowd.  His “Luckiest Man on the Face of the Earth” speech may be as unforgettable as anything else that has ever happened on a baseball field. 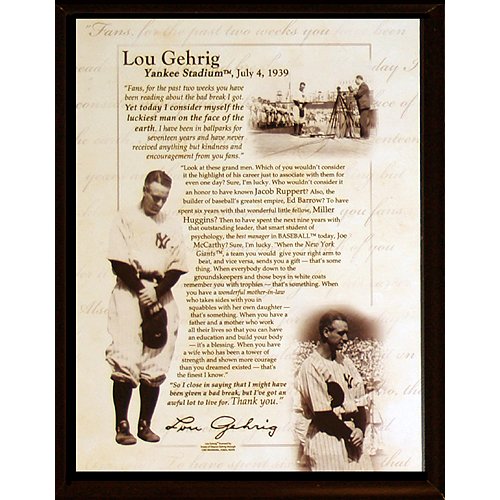 Lou Gehrig died of the illness that would later carry his name, on June 2nd 1941. He was by all accounts a great man and certainly one of the best players to ever to grace a diamond.  He has been missed. 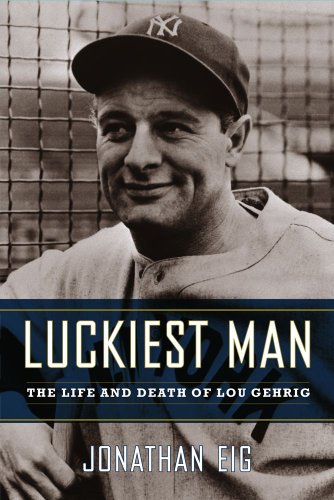 Luckiest Man: The Life and Death of Lou GehrigAmazon Price: Buy Now(price as of Jun 17, 2014)
Next >> The 1994 Baseball Strike and the Demise of the Montreal Expos