I am a retired teacher of English as a second language. I teach on line via Skype, and write on-line articles which reflect my love of travel, language, literature, history and culture. I love writing for InfoBarrel. Why not join me by signing up here: http://www.infobarrel.com/signup.php
InfoBarrel is a writing platform for non-fiction, reference-based, informative content. Opinions expressed by InfoBarrel writers are their own.
InfoBarrel > Entertainment

The great love stories of the ages are generally much more than simple romances. They tell of passionate desire, the tragedy of the human condition, and the inevitability of death. But they are often as much about power and control as they are about love.

Orpheus and Eurydice: Love and Death

The legend of Orpheus and Eurydice is a tale of a love so strong that it challenged death itself.

Orpheus was a musician who received the gift of poetry from his mother Calliope, the muse of poetry, and who was taught to play the lyre by his father Apollo, the god of music. Orpheus was said to play the lute so beautifully that his music charmed wild beasts, and rivers would change course to listen to him play.

All the maidens were charmed by his music, but Orpheus loved only Euridice. Tragically, she died soon after they were married. One day when she was walking in a field of long grass, the shepherd Aristaeus made advances to her, and as she fled she was fatally bitten by a snake hiding in the grass.

Grief-stricken, Orpheus sang a sad mourning song. The gods were so moved that they urged him to descend into the underworld to find his love.

Orpheus was able to travel safely through the underworld because his lute playing tamed the ghosts and monsters that lived there. Finally, he reached the throne of Pluto the god of the underworld and Prosperina the queen of Hades. He played the lyre to them, sang movingly of his love for Eurydice, and begged for her release from death. Proserpina was so moved that she persuaded Pluto to grant Orpheus’ wish on one condition. Eurydice should follow behind Orpheus as he walked back to the upper world, but he was not allowed to speak to her or to look back at her as they walked.

Orpheus began to make his way back to the surface. But as he reached the light of day, he gave into temptation. As he turned back to make sure that Eurydice was behind him, he saw her snatched back down into the underworld a second time.

Orpheus vowed never to love another woman, and after returning home he rejected every woman who made advances to him. Incensed, the women attacked him, tore his body apart and threw his head and lyre into the River Hebrus6. After Orpheus' death, an eagle sent by the god Zeus carried his lyre into the heavens, where it became the constellation Lyra7  and his soul returned to the underworld to finally join his beloved Eurydice forever.

As a woman reading this story I have tried to see the events it relates from Eurydice's point of view. But here is the problem. She seems to be nothing but a passive pawn. After being the target of unwanted advances is snatched from life into death, becomes the subject of negotiations between Orpheus and Pluto, and then obediently follows Orpheus out of the underworld only to be snatched back into the depths once more.

So I am fascinated by the fact that some feminist poets offer intriguing re-interpretations of the legend. For example, American poet H.D. writes

So for your arrogance and your ruthlessness I have lost the earth and the flowers of the earth,

In her poem Orpheus 1, Canadian poet Margaret Atwood goes even further. She has Eurydice say that it was not her choice to return to the world of the living, where she would be nothing a pale shadow of her musically talented husband, and that she preferred death to life with Orpheus9, a point of view which really turns the tale onto its head.

So I thought about other great legendary romances and began to wonder if they might seem different if looked at from the woman's point of view.

Helen and Paris: The Face That Launched a Thousand Ships

As befits a legend, Helen, who was married to King Menalaus of Sparta, was considered to be the most beautiful woman in Greece, if not the entire world.

Paris was the son of the great King Priam of Troy.

Their story began when Paris was asked to judge which of three goddesses was the most beautiful, and to award the winner a golden apple. Was it the exquisite Aphrodite, goddess of love and beauty, the powerful Athena, goddess of wisdom and war, or Hera Queen of the Gods who ruled over marriage and the heavens?

Paris gave the prize to Aphrodite and in return Aphrodite promised him the love of the most beautiful woman in the world. So, naturally, he went to Sparta to woo Helen.  Helen, apparently bored with Menelaus, ran away to Troy with her exciting new lover.

Menelaus was understandably furious and dispatched a great naval expedition to bring Helen back from Troy. This legendary armada  inspired Christopher Marlowe to write of Helen in his sixteenth century play Dr. Faustus:

Was this the face that launch'd a thousand ships,

And burnt the topless towers of Ilium?1

Was Helen a rebel or a victim? We will never know because there is no record of her side of the story. While we hear about the actions and achievements of Paris, we learn only about Helen's stunning  appearance. We do not know whether she escaped with Paris willingly or whether she was kidnapped. When Menelaus demanded that the Trojans return Helen, nobody knows whether Helen was consulted about the decision before the Trojans adamantly refused to comply with his request.

What we know for sure is that Helen's flight from Sparta sparked an extended power struggle between Menelaus and Priam. The Greeks laid seige to the city or Troy. The Trojans held up for ten years, during that time Paris was killed and Helen, apparently making the best of a difficult situation, married his brother Deiphobus.

The Greeks eventually came up with a plan to end the seige. They built an enormous hollow wooden horse. The fleet sailed away, given the Trojans the impression that they had given up, had some soldiers hide inside the horse, which they left behind as a gift.  The Trojans took the horse inside the city walls and then, under cover of darkness, the warriors snuck out and opened the city gates for the returning Greek fleet.

While thousands undoubtedly met violent deaths when the Greeks sacked the city, Helen seems to have had great survival instincts.  Seeing which way the wind was blowing, she decided to go with the winning side. She betrayed Deiphobus to the Greeks, and returned to Sparta with Menelaus.2, 3

According to they myth, this was a fairy tale ending in which Helen lived "happily ever after." But whether this was the truth or whether she simply realized the futility of making any future escape plans remains a secret of history. Her story is overshadowed by that of Paris and the seige of Troy in the same way that Eurydice is overshadowed by Orpheus. 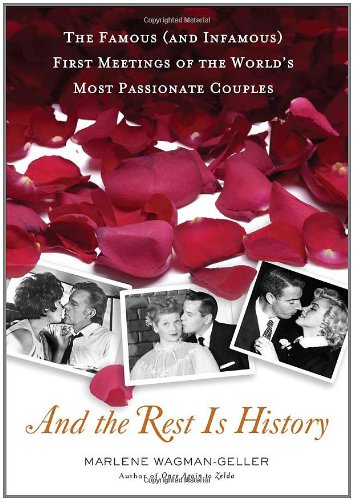 Just as we only know the stories of Eurydice and Helen from the point of view of their lovers, we also only know one aspect of Mumtaz's story.

Considered one of the seven wonders of the world, the Taj Mahal is a stunningly beautiful marble mausoleum in Agra, India on the banks of the River Yamuna built by Shah Jahan between 1631 and 1653. The pure white marble used for its construction came from both India and Central Asia, as did the artists and artisans employed in its construction, some of whom came from as far away as Iran.  The construction of the Taj was a 22 year-long building project which employed 22,000 laborers and 1,000 elephants4  at a cost of approximately 32 million rupees which, adjusted for inflation, works out at £678,800,000 or $1,018,200,0005.

The well-known story of the Taj Mahal involves the love of Shah Jahan for his favorite wife Mumtaz Mahal. The Shah first caught sight of fifteen year-old Arjumand Banu Begum at a market when he was a fourteen year-old prince. They married five years later, and when the prince became Emperor he named her Mumtaz Mahal, meaning "Jewel of the Palace". Mumtaz and the Shah were a devoted couple and she accompanied him everywhere. In 1631 the pregnant Mumtaz accompanied the Shah on a military campaign where she died giving birth to their fourteenth child. The heartbroken Shah went into mourning for two years along with his entire court.   He built the Taj Mahal as a monument to his beautiful and devoted wife, and when he died he was laid to rest next to his beloved Mumtaz.4 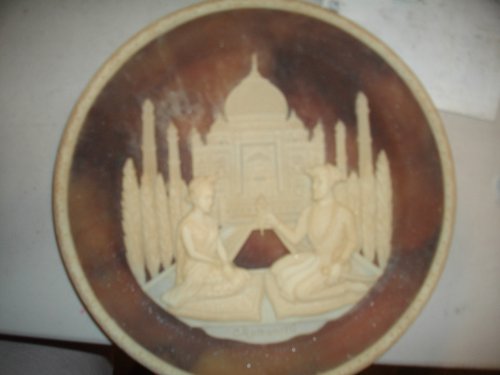 "The Taj Mahal Lovers" Shah Jahay and Mumtaz Mahal - Collectible Plate No. 06765 - Second issue in the limited edition permanently closed in 1980 - GREAT ROMANCES OF HISTORY COLLECTION by Carl Romanelli Amazon Price: Buy Now(price as of May 7, 2019)

But it has also been proposed that the idea that the Taj is a monument to undying love is nothing but a myth and that it is, in fact, an extravagent testament to Shah Jehan's overblown ego.

Not only did the Shah keep Mumtaz constantly pregnant until, worn out with childbearing, her fourteenth pregnancy proved fatal, but contemporary accounts portray him as vain, power hungry and anything but a devoted husband. After the death of his legendary love he is said to have chased after the wives of his court officials, is rumoured to have had an incestuous affair with his own daughter, and reportedly died from side effects caused by the over-use of aphrodisiacs.

It has therefore been suggested that the Taj is a monument not to the devoted Mumtaz but to the vanity of Shah Jahan who saw himself as the Perfect Man, the representative of God on earth, and that the Taj symbolizes both the glory of God and that of the ruler who built it.10

If there is a lesson to be learned from modern re-interpretations of these legends, it is this. History is written by the winners, who are usually men, but there may always be other, sometimes more interesting, perspectives, especially if you ask  a woman.