Winning in Magic The Gathering is all about having the right cards, or in other words, having the right MTG card combos for your deck.  In Magic, cards that work together to produce amazing results are called combos.  When a combo has an infinite effect, it is called an infinite combo.

The most desired infinite combos in Magic The Gathering are combos that are self terminating.  Self terminating combos are those that have the ability to end once they have begun.  These are the only ones that are legal to use in tournaments, otherwise the match is deemed a draw.

The key to most MTG card combos is combining older cards with newer cards.  With countless thousands of cards to choose from, infinite combos are relatively common, but most require the work of four or more cards, which is very difficult to pull off in a match.  Here are 3 combos that require 3 or less cards: 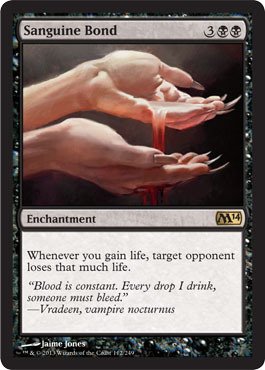 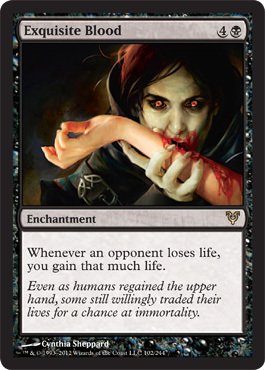 These two cards create a powerful MTG card combo that produces an infinite amount of damage and an infinite amount of life.  This combo is NOT self-terminating, so this is more of a casual game combo rather than tournament combo, but can be effective in situations where you are bound to loose and would rather come out with a draw.

Sanguine Bond states: "Whenever you gain life, target opponent loses that much life".

Exquisite Blood states: "Whenever an opponent loses life, you gain that much life".

In order to trigger this infinite combo, you need to have both enchantments in play, and then simply deal any amount of damage to an opponent OR gain any amount of life.  The effects will trigger off of each other resulting in the death of each opponent, all the while gaining you life.

Used in conjunction with creatures with lifelink, such as Vampire Nighthawk, this combo becomes extremely difficult to deal with for opposing players.  Any damage that Vampire Nighthawk deals is directly translated into life gain, which will trigger the infinite loop without having to deal damage to an opponent. 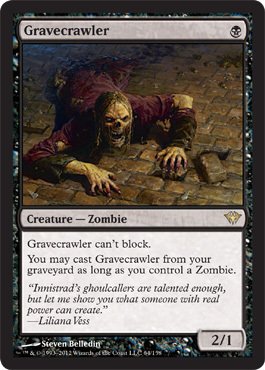 Magic: the Gathering - Gravecrawler (68) - Dark Ascension - Foil Amazon Price: $5.56 Buy Now(price as of Aug 19, 2014)
Gravecrawler: "Gravecrawler can't block. You may cast Gravecrawler from your graveyard as long as you control a Zombie." 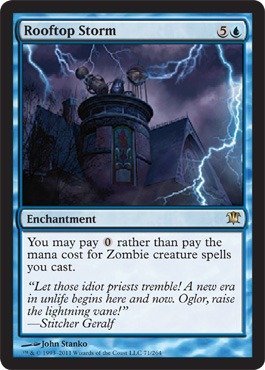 Magic: the Gathering - Rooftop Storm - Innistrad - Foil Amazon Price: $0.94 Buy Now(price as of Aug 19, 2014)
Rooftop Storm: "You may pay 0 rather than pay the mana cost for Zombie creature spells you cast." 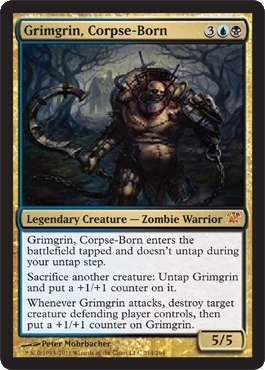 This MTG card combo has many different avenues for a wide variety of infinite combos.  The main two cards for this are Gravecrawler and Rooftop Storm.

Gravecrawler states: "You may cast Gravecrawler from your graveyard as long as you control a zombie."

Rooftop Storm states: "You may pay 0 rather than pay the mana cost for Zombie creature spells you cast."

Grimgrin, Corpse-Born states: "Sacrifice another creature: untap Grimgrin and put a +1/+1 counter on it."

With these three cards, you can sacrifice Gravecrawler an infinite amount of times and therefore put as many +1/+1 counters on Grimgrin as you want!  Consider the effects with this combo and the following cards: Bloodthrone Vampire "Sacrifice a Creature: Bloodthrone vampire gets +2/+2 until end of turn.", Blood Artist "When Blood Artist or another creature dies, target player loses 1 life and you gain 1 life.", and Grave Pact "Whenever a creature you control is put into a graveyard from the battlefield, each other player sacrifices a creature." 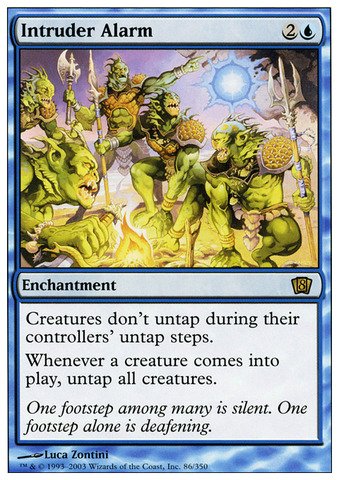 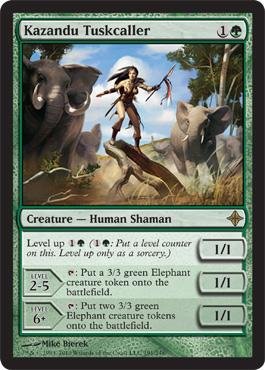 Magic: the Gathering - Kazandu Tuskcaller - Rise of the Eldrazi - Foil Amazon Price: $1.47 Buy Now(price as of Aug 19, 2014)
Kazandu Tuskcaller: "Level up 1+Green (Put a level counter on this. Level up only as a sorcery.) Level 2-5: Tap, put a 3/3 green Elephant creature token onto the battlefield. Level 6+: Tap, put two 3/3 green Elephant creature tokens onto the battlefield." 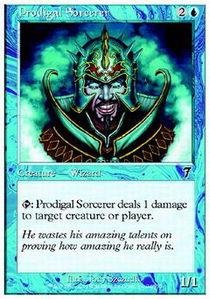 This is one of the easiest infinite MTG card combos to pull off because all of these cards have relatively low casting costs.  With this combo, you can create infinite damage and an infinite amount of 3/3 Elephant Creatures!

Intruder Alarm states: "Whenever a creature comes into play, untap all creatures."

Kazandu Tuskcaller does require a couple levels with her leveling ability in order to create the 3/3 Elephants, but once it does you have everything you need to create an infinite army of elephants!  Now add the Prodigal Sorcerer:

Creating decks for these combos is very easy.  Sanguine Bond and Exquisite Blood both work very nicely in Vampire decks, as well as life gain decks.  You'll want to add cards that will allow you to search your library for these enchantments and put them into your hand.  Building a deck directly around these two cards may not be the best option, but having them as an alternate win source is smart.

Here are a few cards that may help in getting these enchantments into your hand:

Vampiric Tutor "Pay 2 life: Search your library for any 1 card.  Shuffle your library, then put that card on top of your library."

Demonic Tutor "Search your library for a card and put that card into your hand.  Then shuffle your library."

Diabolic Tutor "Search your library for a card and put that card into your hand.  Then shuffle your library."

Beseech the Queen "Search your library for a card with converted mana cost less than or equal to the number of lands you control, reveal it, and put it into your hand.  Then shuffle your library."

For the Gravecrawler, Rooftop Storm combo, it is again probably best to have this combo as an alternate focus for a deck, since Rooftop Storm has such a high converted mana cost.  These cards obviously work well in Zombie decks, but also combo very well with Vampires that sacrifice creatures and have abilities that trigger when creatures die.

Lastly, the Intruder Alarm combo is probably a combo that you can make a deck directly around.  All the cards for the combo have a low converted mana cost, and therefor can be played very early on in a match.  What is more important is that using Green and Blue in your deck, which you'll need to in order to use the cards for the combo, you have great mana ramping abilities with Green, and great card draw and hand advantage with Blue.  Throw in cards that will give you the ability to sift through your deck for the ones you need and you can get your combo out very early on.

These are a few of my favorite cards to use to help me sift through for the combo cards I need:

Ponder "Look at the top three cards of your library, then put them back in any order.  You may shuffle your library.  Draw a card."

Preordain "Scry 2, then draw a card."

Teferi's Puzzle Box "At the beginning of each players draw step, that player puts the cards in his or her hand on the bottom of his or her library in any order, then draws that many cards."