Special Feature Find Out How to Make a  (Fairly Significant) Online 'On-the-Side' Income through Writing
InfoBarrel is a writing platform for non-fiction, reference-based, informative content. Opinions expressed by InfoBarrel writers are their own.
InfoBarrel > Auto > Motorcycles

What's the Difference Between the Razor Electric Motocross Bikes?

Razor has been making rechargeable riding machines like dirt bikes for many years, and the rechargeable electric Dirt Rocket series includes several models to get you out on the road or off roading in style. There are 4 models in the Dirt Rocket family worth consideration. Here is what you need to know to pick the right one.

All four models of the Dirt Rocket dirt bike are made from quality, sturdy steel construction and are built to last. They are propelled by a chain-driven motor and sit atop large, knobby tires. Each runs on 12-volt rechargeable batteries and they run quieter than any gas-guzzling dirt bike ever could. This is an especially great feature for those who want to keep the sound level down for the neighbors. The batteries will fully charge overnight, or in about 12 hours.

Other common features include a retractable kickstand, intuitive twist grip acceleration, and adjustable riser handlebars. This adjustable feature on the handlebars will allow you to set the height just right for your young rider and make adjustments as they grow. This improves both comfort and safety. 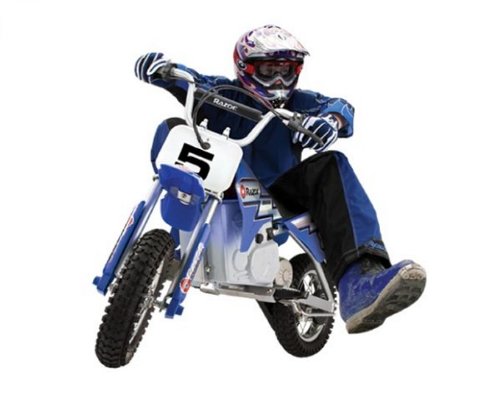 The Dirt Rocket MX350 is the smallest and lightest bike in the line. It will accommodate riders as young as 12 or 13 years old and will support a rider weighing up to 140 pounds. Weighing only 65 pounds overall, the MX350 is pretty easy to handle for a kid of this size. The brake is a hand-operated rear-wheel brake that will feel familiar to any kid used to riding a mountain bike.

As for performance, the MX350 will move at speeds up to 14 miles per hour. It is powered by a pair of 12-volt rechargeable batteries and will provide up to 30 minutes of use between charges. The battery charger is included with all 4 Dirt Rocket models.

Many buyers become confused by the difference between these two entry-level models, so here is the scoop to make it clear. They are essentially the same exact dirt bike in different colors. The MX400 is newer, but the specs, power, speed, and weight are the same as the MX350, so the main difference is where you may find it for sale and how it looks. Expect the same performance for the same size rider between the MX350 and MX400. 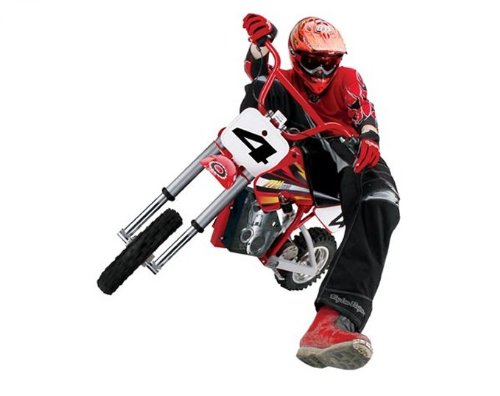 For kids that need a bit more power, the Razor MX500 will fit the bill. It is much heavier than the smaller models, weighing in at 98 pounds, but it uses three 12-volt batteries instead of two to power the bike. This allows the MX500 to travel up to 15 miles per hour, even with a heavier occupant. This model is suitable for kids age 14 or over who don’t exceed 175 pounds. This bike will run a bit longer too, or up to 40 minutes on a single charge.

Some components are improved in this line. For one, the brakes are hand-operated dual disc brakes, a nice feature for the added weight of the bike and rider. In addition, the chain driven motor is variable speed, which will give riders more speed control and ultimately greater satisfaction in performance. 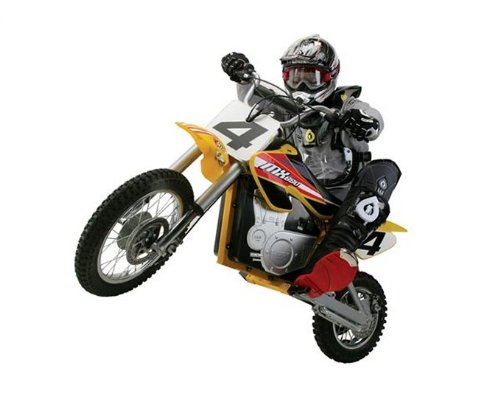 For the big kids or even adults, the Razor MX650 really delivers. Like the MX500, it has the better hand operated dual disc brakes and variable speed motor, and also weighs in at around 98 pounds. It also uses the triple 12-volt battery setup that will run the bike up to 40 minutes on a single charge.

The main difference is that this bike is suited for kids 16 years old and up as it can support the added height and weight of these riders. This model will support riders up to 220 pounds, which is very good for an electronic rechargeable dirt bike. The MX650 will reach speeds at up to 17 miles per hour, a modest step up from the MX500.

When it comes to making quality battery-operated dirt bikes that are built to last, Razor has done a very good job with the Dirt Rocket series. To pick the bike that will work best for you, first determine the age and weight of the rider that it needs to support. Beginners will love the MX350 or MX400, while bigger kids demand the added size and power of the MX500. If rider weight will exceed 175 pounds, the MX650 is the bike for you.

Regardless of your choice, you’ll get a quality steel build in a low-noise dirt bike that is a blast to ride that can get around off-road with ease. With the Razor brand behind it, you’re sure to enjoy your new dirt bike for many years to come.

But which model will you choose and why? Also, if you have any queries, concerns or general remarks regarding eithter the comparison of the MX350 Vs MX400 Vs MX500 Vs MX650 or about any bike specifically then please do not hesitate to make them in the comments section that you should find just below and we will be sure to respond to you as soon as possible.