Deb writes under the pen-name "Introspective" for InfoBarrel. You can follow her on Twitter, Google+, Linked-in, and Instagram @DebW07.
InfoBarrel is a writing platform for non-fiction, reference-based, informative content. Opinions expressed by InfoBarrel writers are their own.
InfoBarrel > Entertainment > Music

Maroon 5 and Kelly Clarkson at the Hollywood Bowl

Collage of Photos Taken by DebW07 - All Rights Reserved

October 6th, 2013 marks the day that I became a fan of the musical group Maroon 5. How do I remember the date? It's easy because that was the day I sat in the audience at the Hollywood Bowl and experienced one of the liveliest and most entertaining concerts. The performance was a true "get-up from your seats and dance to the jam" adventure.  Prior to that experience, my musical preferences were limited to mostly 70s and 80s hits, and Maroon 5 was just another musical group that my daughter and her friends liked. Now, in addition to Luther Vandross; Teddy Pendergrass; and Earth, Wind, and Fire, this group is my new go-to band for some favorite jams (songs).

Oh, and I must thank my lovely daughter for inviting my husband and I to join her at this lively event. After all, it's not often that a young woman in her early twenties wants to attend a concert with her parents.

The evening began with a performance by a talented vocalist named Rozzi Crane. She sang several original songs that were quite catchy. However, Crane really got the audience going when she belted out a soulful rendition of the Marvin Gaye megahit "Let's Get It On." Later, Crane joined Maroon 5 and sang the Christina Aguilera solo to the song "Moves Like Jagger," and she was quite good.

As the day turned into evening, Crane finished her set and the audience waited patiently for Kelly Clarkson. Clarkson, the first winner of the television reality show American Idol, has been one of the most successful artists from the show. This petite lady packs a vocal punch and she came out vocally swinging. She performed all her popular hits and a few new country inspired tunes.

As the evening continued, Clarkson got the audience gleefully riled up and ready for the main act. Her final set included a neon light show and the song "Since You Been Gone." Needless to say the crowd was up singing and dancing . . . and so was I. During her performance, Clarkson was surprised by a playful prank. The guys from Maroon 5 convinced the technical staff to play a special scene from the movie "The 40-year-old virgin" on the large screens (you know the scene where Steve Carell yells out Clarkson's name). She was a bit confused at first but when Clarkson realized what was going-on she laughed and told the audience she and the guys had been playing pranks back-and-forth throughout the tour. After her performance Clarkson told the audience now that the tour was over she was going to concentrate on her upcoming nuptials.

Next it was time for the main event. The audience was ready for Maroon 5 and the group did not disappoint! They performed their top songs and even surprised us with a rendition of the song "I Wanna be Your Lover" by Prince. Lead singer Adam Levine's voice captured Prince's high pitched notes perfectly. In addition, Maroon 5 joined forces with the group Grooveline Horns in a musical melody paying homage to Stevie Wonder, Rick James and others. For a few moments that evening I was a teenager again. What a treat it was listening to the two groups play songs like Wonder's "Feel it All Over" and James' "Give It To Me Baby." Wow, what a night.

Maroon 5 also performed their crowd-pleasing hit "Moves Like Jagger." The song pays homage to the famous Rolling Stone rocker Mick Jagger. Not only was I dancing to the groove but I was singing along at the top of my voice with Adam Levine and the rest of the Maroon 5 devotees in attendance. This concert left me feeling satisfied and happy that I attended. I definitely wanted one more night of this visual and listening pleasure.

Dance The Night Away

A Night To Remember

I went into this concert knowing one song (Moves Like Jagger) and I came out loving Maroon 5! All the performances were entertaining, however, Maroon 5 seemed to pull out all the stops! Although I didn't know their music ahead of time, that didn't stop me from dancing and having fun  along with the rest of the crowd. When the group played their song "Moves Like Jagger," they unquestionably brought down the house! I absolutely loved the live performance and I was happily rocking out with the rest of the "groupies." I could have danced the evening away, and at the end of the concert the audience was treated to a spectacular fireworks show. This show, like the entire concert, was spectacular and an amazing treat for the crowd.

When the concert was over I noticed several folks humming and generally happy as they maneuvered through the usual swarm of people trying to get to their car as quickly as possible. When my family finally got to our vehicle we talked about the concert and excitedly looked at the photos I took (no, I wasn't driving). I felt like a teenager who'd just attended her first concert, I was in high spirits.

What an evening! Maroon 5 has made a new fan and I wouldn't be surprised if there were several other people just like me. I'm so thankful that my daughter thought her parents were "cool" enough to attend a Maroon 5.

The group's latest CD "Maroon 5 Overexposed" includes such hits as Moves Like Jagger, Payphone, Lucky Strike, Love Somebody, One More Night, and more. Although the CD is titled "Overexposed" the songs are anything but.

Since the concert, I've found myself listening to Maroon 5 more and more. I've downloaded the songs from the Overexposed CD onto my iPod and I play them while I work-out and run on the treadmill. Although I got on this bandwagon a little late (the group's first hit "Harder to Breathe" is from their 2002 CD, "Songs About Jane"), I'm just happy that my daughter introduced me (in a big way) to this band.

I recently read this quote by Adam Levine; "Before I go on stage I pretend that everyone loves me." Well, judging from the folks at the Hollywood Bowl on October 6th, it sure seemed like everyone loved him (and the rest of the group). I sure did. 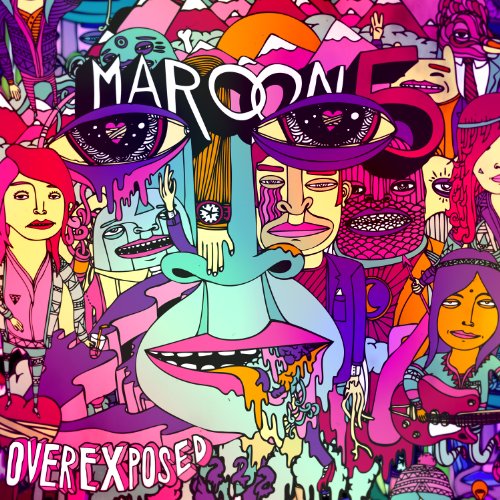 This Article is the Property of DebW07

All rights reserved. No part of this publication may be reproduced, distributed, or transmitted in any form or by any means, including photocopying, recording, or other electronic or mechanical methods, without the prior written permission of the publisher, except in the case of brief quotations embodied in critical reviews and certain other noncommercial uses permitted by copyright law.

This work is licensed under a Creative Commons Attribution 3.0 Unported License.