Authentic Mexican food has become confused in many ways in recent years with TexMex food, that blend of authentic Mexican food and largely Texan experimentation which has produced so many widely popular dishes. Fajitas is a dish which very much falls in to the latter category and in this instance I have twisted it even further by roasting rather than flash frying the chicken and serving it on Italian bruschetta instead of with tortilla wraps. If you wish to use a whole chicken for this recipe rather than simply the crown, the dish could easily be made to serve four people by simply doubling the other ingredients.

Sit the chicken crown in a deep plate or large bowl. Scatter with the fajitas spice and rub it carefully all over the meat with your fingers. Cover and leave for a couple of hours to dry marinate. If you wish, the chicken could be left overnight in the fridge in this way to really let the spices permeate. If choosing this option, remember to remove the crown from the fridge around an hour before it goes in to the oven to let it come up to room temperature.

Fajitas spice is gently rubbed in to chicken crown

When you have spiced the chicken and set it aside, you should prepare the salsa and guacamole dips to let the various flavors similarly infuse.

Avocado is seeded for making guacamole

Sit the avocado on its broad end on a chopping board and use a large knife to cut down through the top center to the stone. Slowly turn the avocado away from you, keeping the blade of the knife touching the stone, until you have cut all the way round the longest circumference. Remove the knife and twist the two halves gently in opposite directions to separate. Protect your weaker hand with a folded over towel and sit the half with the stone embedded in it on the towel. Carefully, bring the knife down on the center of the stone with sufficient force that it embeds itself. Twist the knife and the stone should pop free.

Preparing to mash the avocado and lime juice

Spoon the avocado flesh in to a bowl and immediately squeeze over the juice of half the lime. This is not just for flavor but to stop the avocado flesh oxidizing and darkening unattractively in color. Mash with the back of a fork until smooth.

Cut the chilies in half length ways and scrape out and discard the seeds. Finely chop and add them to the bowl with the avocado along with half the chopped cilantro and some salt and pepper. Stir well, cover with plastic wrap and refrigerate until required.

Seeding tomato and cucumber for salsa

Seed and moderately finely dice the tomato and cucumber piece. Put them in to a separate bowl. Grate in one of the peeled garlic cloves. Add the remaining cilantro and lime juice as well as around a tablespoon of extra virgin olive oil.

Salsa ingredients are combined in a bowl

Season with salt and pepper, stir well, cover with plastic wrap and also refrigerate until required.

Preheat your oven to 400F/200C/Gas Mark 6. In order to accurately calculate the cooking time, the crown should be weighed and the time calculated as twenty minutes per pound plus twenty extra minutes. If you don't have kitchen scales, you're simply going to have to give it your best guess and keep an eye on the chicken as it cooks. It's likely going to take somewhere in the region of fifty minutes to an hour and ten minutes.

Chicken crown is ready for roasting

Lightly drizzle a roasting tray with olive oil and rub more over the fleshy top of the chicken. Sit the chicken on the tray and put it in to the heated oven for the allotted cooking time.

When the cooking time is up, remove the chicken from the oven and pierce it at its thickest part with a metal skewer. The juices should run clear. If there are any red or pink blood traces, put it back in the oven for ten more minutes and test again in the same way. Leave the roasted chicken to rest for fifteen minutes.

Put the bread slices on to toast to medium golden.

Lift the chicken crown to a chopping board and use a carving knife to carefully slice off the two breast fillets, starting either side of the central breast bone and allowing the main bone and ribs to guide your knife.

Breast fillet is thickly sliced across the grain

Slice each fillet across the grain in to four or five thick pieces.

A slice of bruschetta is laid on each plate

Peel and lightly crush the second garlic clove. As soon as the toast is ready, rub one side of each slice with the garlic clove before drizzling lightly with some extra virgin olive oil. Season with a little salt and pepper. This is essentially the Italian creation known as bruschetta. Lay one slice of toast, oiled side up, on each plate.

Sliced chicken is laid on bruschetta

Attractively arrange a sliced chicken breast on top of each slice of bruschetta. 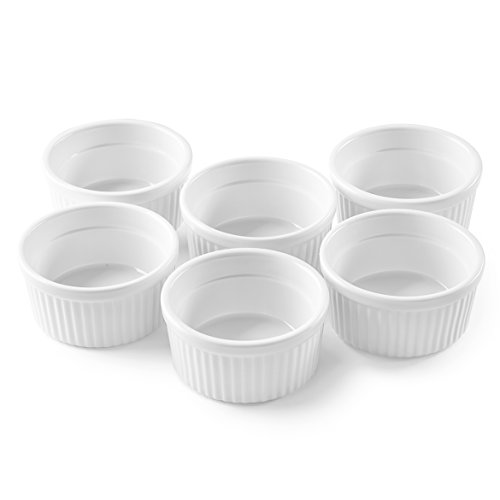 Bellemain 4 oz. Porcelain Ramekins, Set of 6 Amazon Price: $24.95 $11.99 Buy Now(price as of Feb 15, 2016)
The little porcelain ramekins used to serve the dips in this recipe have a never ending list of possible uses in the kitchen. They can generally be purchased fairly inexpensively from Amazon and will last a lifetime when cared for properly.

Tucking in to Mexican fajitas roast chicken and dips

In each instance, divide the guacamole, salsa and soured cream between two small porcelain ramekins and sit a ramekin of each type of dip on each plate.