Miley Cyrus - Is There More to Her Unfollowing Liam?

What's Up with Miley Cyrus?

Miley has been making one statement after another since she chopped off her hair last year and now she's made another. Today, it was reported that Miley has 'unfollowed' her fiancé on Twitter. Is this a lover's spat, a prelude to a break-up or just another one of Miley's statements?

While Miley's fans watch her Twitter account with bated breath, reporters around the world have been focusing on other aspects of Miley's daily life.

For instance, on the Alan Carr: Chatty Man Show (watch the clip below), Miley and Alan talked about her smoking weed while she was in Amsterdam. Miley joked about the way she looked going into the shop and the difference when she came out. Since she spent 7 hours inside, the public new something was not quite right and when Alan asked if it was good, Miley replied, "Duh, it was Amsterdam!"

Miley and the Blanket

While all stars need some privacy, Miley has been enjoying her time in the spotlight. So, what's up with the blanket covering her head when heading to the airport in London?

The pictures taken of Miley don't show off her smile or even her crazy hair. Instead, Miley felt compelled to cover it all up. What she doesn't know is that anyone walking around in shorts that are that short with legs that long covering their head up with a blanket is going to turn some heads whether they are famous or not, am I right?

If you don't believe me, try wearing that same outfit and head to school or work. Count how many times someone turns their head or takes a pic. You'll see what I mean.

While the world waits to see what will happen to Liam on Twitter, the rest of the world is waiting to see what kind of music she will turn out on her new album (listed below).

As for her hair, she has decided she misses her long hair and has begun letting it grow out. What do you think her hairstyles will be over the next year? Do you think she'll opt for extensions or will she embrace each hair length as it grows?

Get Her Newest CD 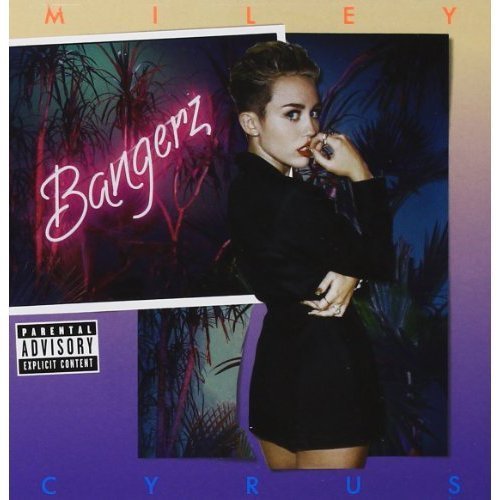 On the Alan Carr Show - September 13