Are You Using Mindless Chores as An Excuse to Avoid Taking Action That Will Change Your Life?

There are lots of ways to measure a day's productivity, but recently, I had an "aha!" moment that caused me to change the way I look at this issue, and it has made all the difference in what I'm getting done, and more important, what essential work I am getting done. I measure whether a day is productive by how many dirty dishes are in the sink. There was a time when I would consider a day productive if the sink was empty, its aluminum surface polished and dry, and kitchen floor spotless for good measure. Now, a productive day can be one in which the sink is piled high with dirty dishes, the laundry baskets are overflowing, and my email inboxes are filled with burgeoning junk, but more productive actions get completed.

Don't get me wrong. It's not that I don't consider housework constructive. On the contrary, I love traditional housework; dishes, laundry, vacuuming. You name it. I love them all because I love the idea of a spotless, gern-free home. The Husband accuses me of "germophobia" on a regular basis, and I'd to see anyone tell me that after I've invested lots of time and energy cleaning my house that I just wasted my time (and you'd probably like to see it too, because I'm here to tell you up front, that this busy body is risking a fat lip). So why do I say that time spent doing housework is not time spent in a constructive way?

I didn't say it isn't constructive. I said it wasn't productive. Understanding the difference between those terms is a critical crossroads in your future. You can be using time in an extremely constructive way because you are accomplishing short-term, one-off goals, while at the same time destroying your long-term productivity, and making it impossible for you to hit your important targets, such as starting a business, finishing a degree, writing a book, or any other life-changing objective.  Unfortunately, in many ways it is a lot more appealing, and not just for me, to just "get something done," even if that accomplishment doesn't make a real difference in your life at the end of the day, or more likely, the end of the month and the end of the year.

Even people who don't enjoy housework often prefer it, or other similar tasks like running routine errands (I'm not even going to mention updating your social networking sites) to doing what is actually a lot more difficult; that is, the hard work of setting objectives and deadlines for projects that would, after devoting sufficient time and effort to a carefully-planned workflow, actually change their lives. In short, hard work pays off over time, but unthinking rote activity feels good right now, especially since it provides the illusion that you are accomplishing something.

Another example of creative procrastination is compulsive exercising. Exercise is an essential component of a healthy lifestyle, of course, and yes, you are accomplishing something when you do it, but is that something related to your career and life goals? Exercising is like flossing your teeth. It's something you've got to do, but unless you are a 90 year-old retiree with no big plans, it shouldn't be the focus of the day. If you are working out in the middle of the day, rather than getting up at 6 a.m. to do it, you could be using it as an avoidance strategy.

Another phrase for Creative Procrastination is Active Avoidance

Creative procrastination might be more accurately called active avoidance. I define it as the thought process that results in one choosing to be seduced into doing intellectually easy, rote tasks rather than more challenging brain work such as coming up with new business ideas, goal setting, and creating meaningful deadlines. While these activities require that the highest reaches of your cerebral cortex by firing on all cylinders, contrast the degree of intellectual rigor and creativity that housework or simple office tasks like routine office organization demand. With those jobs, the objective is clear, and the action steps are already there for you. Your higher brain can be on autopilot. You can daydream or even watch tv while you're doing these things. No wonder you'd rather throw yourself into a frenzy of semi-mindless activity that offers a short-term payoff rather than sit staring at your computer screen trying to figure out what to do next.

How can you tell if you are engaging in creative procrastination?

If you do this activity consistently and diligently for the next 6 months, will the things in your life that you currently find unsatisfactory be changed for the better?

If you think you might be engaging in creative procrastination, here are some action steps you can try.

Now that you recognize what a threat creative procrastination is to your ultimate success and happiness, I'm sure you realize how important it is to correct course immediately when you catch yourself lapsing into it. Henry Ford once said "Thinking is hard. That's why so few do it." That's also why successful people spend more time thinking, planning and goal setting than engaging in mindless activity, always very busy, and never really getting anywhere.

In Part 2 of this series, we'll unpack the three essentials that you need to  accomplish any goal. 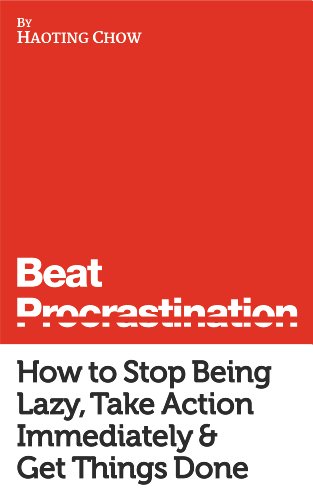 Beat Procrastination: Simple Strategies to Stop Being Lazy & Get Important Things Done (The Warrior Guides) Amazon Price: Buy Now(price as of Sep 25, 2014)
This book will help you get out of the procrastination trap and move ahead.
Next >> How to Get Creative Juices Flowing - Get Your Body, Mind and Soul on the Same Page