Mind Hacks to Increase Productivity and Achieve Your Goals, Part 3: Measurement is Motivation

Credit: From MorgueFile. Attribution Not Required.

Mind Hacks to Increase Productivity and Achieve Your Goals, Part 3: Measurement is Motivation

When you are setting off on an important journey, it's essential to know where you're going, how you're going to get there, and when you need to be there. That statement seems like a restatement of the obvious, doesn't it? Perhaps that's why that for decades, motivational speakers, including heavy hitters like Tony Robbins, Zig Ziglar and Brian Tracy, cited a study of Yale University's Class of 1953 that resonated with so many people. Researchers surveyed the graduates to find out how many of them had written goals for their future. The answer was a measly 3%. Supposedly, twenty years later, the researchers discovered that that pro-active, goal-setting 3% had accumulated more wealth than the other 97% combined!

That's quite a endorsement for the practice of writing down specific goals. It's powerful and persuasive, and not true, as 1996 article in Fast Company magazine demonstrated. While the Yale study is apparently an urban legend, perhaps the reason it rang so true is that the basic premise, that writing down specific, measurable goals, gives a person an advantage in becoming successful, is a fact.

After she learned of the debunking of the Yale Grad Study, Dr. Gail Matthews of Dominican University decided to do her own study to determine the value of written goals, and her research validates the "findings" of the mythical study. As the university reported:

Participants in Matthews’ study were randomly assigned to one of five groups.  Group 1 was asked to simply think about the business-related goals they hoped to accomplish within a four-week block and to rate each goal according to difficulty, importance, the extent to which they had the skills and resources to accomplish the goal, their commitment and motivation, and whether they had pursued the goal before (and, if so, their prior success).  Groups 2-5 were asked to write their goals and then rate them on the same dimensions as given to Group 1. Group 3 was also asked to write action commitments for each goal. Group 4 had to both write goals and action commitments and also share these commitments with a friend. Group 5 went the furthest by doing all of the above plus sending a weekly progress report to a friend. Broadly categorized, participants’ goals included completing a project, increasing income, increasing productivity, improving organization, enhancing performance/achievement, enhancing life balance, reducing work anxiety, and learning a new skill.  Specific goals ranged from writing a chapter of a book to listing and selling a house.

So what makes an excellent goal? It must be specific, of course, but equally important, it must be measurable. The two go hand in hand. If you can't measure a goal in hard numbers, it's not a goal. It's a childish wish, and a setup for failure. Measurement is motivation. That's the rationale behind the current popularity of wearable fitness monitors, which many have found inspire them to improve their health and lose weight without even realizing it, by giving the users specific, measurable goals.  People who had told themselves for years that they will "exercise more" to no avail, suddenly found themselves excited about climbing a designated number of flights of stairs or walking a certain number of steps daily.

Ready to get started? Craft powerful goals by answering the following questions:

To make your goals specific, ask the classic reporter's questions.

Who do you need on your team, if anyone, to achieve it? Who will hold you accountable?

What specifically do you want to do? Complete a chapter of your novel? Contact 10 new sales prospects? Lose 10 pounds?

What is your deadline? Be honest. You know that without a deadline, you end up living on what author Dennis Waitley used to call "Someday Isle," as in "Someday I'll …" Don't live there. Don't even visit there. Its other name is Loserville.

Where do you need to go to make it happen? Back to school? To another city with more economic growth and opportunity? Join a gym?

Why do you want to achieve this goal? This is the time to dream, and really visualize how terrific it will feel when you get there. It's hard to stay focused on the day-to-day process required to reach your goal if you don't have your eyes on the prize.

To make your goals measurable, ask

How many sales calls will you make every day? How many minutes of exercise every week will get you to your goal? How many books do you want to read every month?

How much do you need to save every month to reach your retirement goals? How much should you reduce your portion sizes to meet your weight loss goal?

How often do you need to perform tasks essential to reach your goal? Should you workout three times a week? Floss your teeth twice a day? Update your resume every six months?

After you have done this all important thinking and planning, write your goals down, and to give yourself an extra edge, create a tracking system like a spreadsheet that you share with a friend to make yourself accountable. Then get to work. Don't let learned helplessness or other toxic thought patterns hold you back. Your results will amaze you. 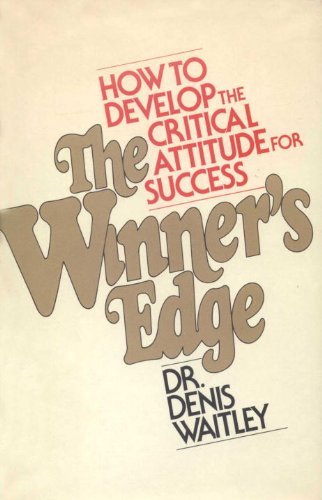 The Winner's Edge: How to Develop the Critical Attitude for Success Amazon Price: Buy Now(price as of May 5, 2015)
Dr. Dennis Waitley has been helping people achieve success for over 3 decades. Do yourself a favor. Read this book and unlock your potential.
Next >> How to Get Creative Juices Flowing - Get Your Body, Mind and Soul on the Same Page