Carlos Bravados, working to educate others in the field of graphic design, and working to help create strong lasting relationships with clients.
InfoBarrel is a writing platform for non-fiction, reference-based, informative content. Opinions expressed by InfoBarrel writers are their own.
InfoBarrel > Entertainment > Games > Board Games

X-Wing is a tactical miniatures game based in the world of Star Wars by George Lucas. The game currently features two factions, Imperial and Rebels, but will be introducing Scum and Villainy any day now.

Each faction has a unique play style, the Rebels feature more access to shielding and some more unique weapon options. The Imperials have some lower point costs, and do a better job at swarming the enemy. The Scum and Villainy faction, a group of bounty hunters and scoundrels, all like to break the rules of the game on a short term basis. All factions are quite fun to play and most people get started with both an Imperial and Rebel army.

The X-Wing starter set is the best place to go for obtaining all the items you’ll need to experiment with the game. Eventually each player will want to get their own starter set so they can get a set of tokens, damage cards, dice and other such items for themselves.

Down and dirty dice and tactics

When you start getting into the full ruleset the game becomes far more interesting. Each player will choose a faction and typically spend 100 pts in construction of their squadron. The points are used to purchase ships, special pilots, weapon upgrades, and rules adjustments. It’ll be at this point you’ll learn the need to purchase a few more miniatures which are available at local game stores, Barnes and Noble, or online. I recommend buying a couple individual ships for your favorite faction as well as the appropriate ‘Aces’ faction. Each box will include more unique upgrade cards, pilots, and tokens as well that are usable on ships across your squadron.

You will also see some very large ships, 8-12” long, I recommend avoiding these unless you really want to play scenarios and missions. The more frequently played game includes only the small to mid-size ships.

The game comes down to tactics and dice, and after 3-4 games it’ll become clear if you would like to use ‘target locks’ or perform bombing runs. You’ll become a better master of K-turns and fire arcs, and learn that sometimes risks are needed to take out an overly ambitious Luke Skywalker.

What the game comes down to is considering what the opponent will do before they do it, and responding if something unexpected happens. Adding terrain (asteroid fields) and playing the missions will make this game much more replayable as well rather than collecting dust on the shelf. 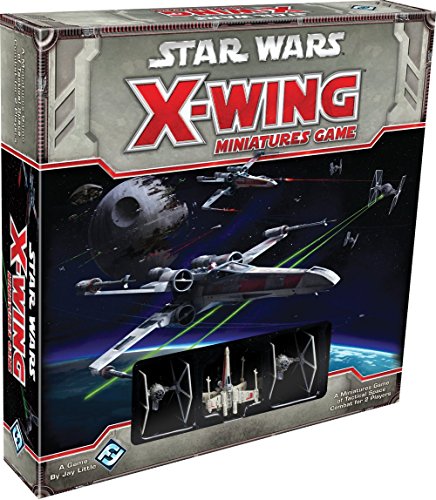 The starter set features quick start rules that give the best introduction to the core rules, and you can start playing within an hour of buying the game to test out how everything works. In your first game set aside the asteroids, upgrade cards and other items, and follow the initial built out squadrons the manual details. Once both players see how easy the game is I think it’ll become a favorite as setup and play goes fast, and games can take a turn when one player feels all hope is lost.

Playing with my Man Dolls!

Even Dark Helmet likes to play with the rebels every now and again.

Fantasy Flight has a winning game here, and it's been duplicated in some respect to the Star Trek and Dungeons and Dragons IP, so they are doing something right.

X-Wing has beautiful miniatures, they are fully assembled and have a beautiful amount of detail and paint. The game is ready to play out of the box, and is scalable to tournament play if your really competitive.

People are playing this across the US in various game nights at their local game stores, but since the play space is so small it could be played on a table at Starbucks.

I enjoy X-Wing, and find it cost effective...the new faction shows Fantasy Flight will continue to support this for quite some time, and with the movies coming out, that can extend the life of the game even further.