Look at my other article about the 'Dallas TV Series'. The_TV_Series_Dallas_will_return_next_year
InfoBarrel is a writing platform for non-fiction, reference-based, informative content. Opinions expressed by InfoBarrel writers are their own.
InfoBarrel > Entertainment > Film > Movies

Morecambe and Wise: A British Institution!

The Play What I Wrote!

Eric Morecambe and Ernie Wise have been in the hearts of the British population for many decades with their split-second timing and hilarious comedy acts. Sadly, they are no longer with us but the memory of these two talented comedians and their ability to entertain all ages lives on. Their many recorded TV shows, especially the  compulsive viewing of their Christmas Specials, are constant reminders of their fun shows. Their comedy always had a huge visible impact on the viewer.

Credit: wipednews.comBoth Eric Morecambe and Ernie Wise met when they were booked to appear at the same Nottingham theatre in 1941 as separate acts. The war years intervened and it wasn't until 1946 that their real partnership began when they were both billed as variety acts to appear at Swansea Theatre. For the next nine years they played theatres around Britain but in 1954 they began to become known as a radio act. Unfortunately, the newspaper reviews were far from complimentary but it made them realize that it would be better if they could take some control of their own material.

Their breakthrough came in 1956 with an invitation to have a regular spot on The Winifred Atwell Show. Winifred Atwell was large in both size and personality and was a gifted pianist, already a celebrity. Their material was written by talented Johnny Speight and from then on their acts became well-known but they still had to wait for their glory years. Their fame as a household name became apparent when Eddie Braben became the writer of their material. This relationship was to be a long-lasting and highly successful one.

The dynamics of the comedy partnership changed over time. Initially, Eric was depicted as an aggressive comedian whilst Ernie was the disapproving straight man. Eddie Braben altered their relationship. Ernie became a comedian who wasn't funny whilst Eric was a straight man who was funny. It became a much more complex relationship and their audience loved them. Ernie's character projected himself as a talented writer of amateur plays. This became a central theme with his catchphrase, 'the play what I wrote', making audiences grimace at his poor grammar but he used it constantly to brilliant effect.

At this point, celebrity character actors were invited to act in these plays. Laurence Olivier, John Mills, Vanessa Redgrave,

Credit: guardian.co.ukPeter Cushing, Eric Porter, Penelope Keith, Glenda Jackson and many more famous actors agreed to perform. The words they had to say and the acts they had to perform were parodies of historical plays. But the change of words and actions resulted in humiliation for the celebrities. They joined in with the spirit of the performance and usually managed to keep a straight face!

Morecambe and Wise would often pretend not to have heard of these celebrities or they would call them by the wrong name, like André Previn was called Andrew Preview. Angela Rippon, a well-known BBC newsreader , who had trained as a ballet dancer, was invited to take part in the show. She began by reading the news and then went on to dance. Eric and Ernie were always involved fully in the sketches.

In 1971 André Previn was invited to take part in the show. Previn had a very tight schedule but the sketch is remembered by all Morecambe and Wise fans as one of their finest. André Previn delivered his lines with perfect timing. He was to conduct Eric playing the piano. Of course, Eric fails to  walk to the piano in time to begin playing and then ignores Previn trying to conduct him in on cue as Eric's view is blocked. Previn has to leap up and down so Eric can see him. When he does eventually play it is so bizarre that Previn is exasperated. He tells Eric he is playing all the wrong notes. Eric replies, famously, "I'm playing all the right notes-but not necessarily in the right order." Previn then demonstrates how it should be played but Eric and Ernie declare  "It's rubbish," and walk off stage. As soon as Previn begins to play it like wrongly, like Eric, they return full of praise and start dancing.

Eric and Ernie were depicted as two friends not only living together but sharing a bed. Eric is supposed to have felt uncomfortable about being in bed with Ernie so he was always seen smoking his pipe to make the scene more masculine.

Whilst listening to the radio whilst preparing breakfast the tune,'The Stripper' comes on. Morecambe and Wise then perform a dance using a variety of kitchen utensils and food. They catch toast as it springs up from the toaster and pull out a string of sausages from the fridge swirling them around in time to the music.

There were many catchphrases which were used with regularity. As Ernie was shorter than Eric, Eric always referred to Ernie's, 'short, fat, hairy legs'.Ernie was supposed to wear a wig and Eric constantly pointed out,'You can't see the join'.Constantly, Eric offered, 'Tea Ern'?

Eric would push his spectacles to one side of his face and waggle them up and down or pull a male guest towards him by his lapels so that their faces were close together. It was all a bit slapstick in presentation but with immaculate timing and resulted in lots of laughter.Often he would  hold a paper bag in one hand, throw something imaginary into the air and catch the 'item' in the bag. Then another visual gag was Eric fighting  his way to find the gap in the curtains to join Ernie on stage. When introducing one of their celebrities on to the stage, they would inevitably face the wrong way and wait for their entrance. The celebrity would be standing behind them waiting for them to realize their mistake. Of course, they never did. Even though the audience knew what to expect the repetition of these acts never failed to amuse their loyal fans.

At the end of each show they would do  silly actions to 'Bring me Sunshine,' as they disappeared off stage.

Their long-standing partnership never faltered.The material they used changed over time with new writers, although Eddie Braben was a real influence on their style of delivery. The deep understanding Eric and Ernie had with each other resulted in immaculate timing and an almost uncanny reading of each other's mind.

They may not be able to be present in real life on our TV screens today but their Christmas Shows will help our memories of their outstanding talent to live in our hearts for a long time in the future with real affection.

Lots of 'Best Bits' of Morecambe and Wise 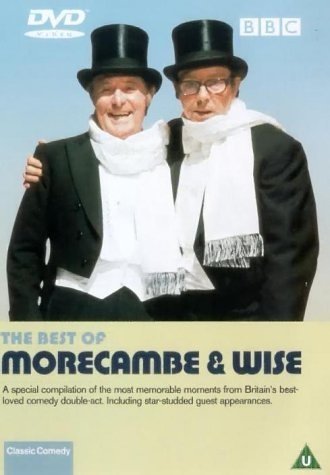