My name is Rose and I am a Canadian freelance writer. I love to tackle human rights issues and anything related to the betterment of society and our planet.  For a sorted directory of my articles: RoseWrites.netboard.me Love to write too? Join me on here on InfoBarrel.
InfoBarrel is a writing platform for non-fiction, reference-based, informative content. Opinions expressed by InfoBarrel writers are their own.
InfoBarrel > Lifestyle > Pets & Animals > Birds

Just this last week, I awoke to hear the gentle cooing of mourning doves outside. As I was leaving the house, I heard the flutter of wings and noticed a whole bunch of twigs on my porch.

Looking up, I noticed that a nest (left behind by house finches) was being "renovated" to accompany a mommy mourning dove.
Later on, when I peaked out the window, I saw that both mommy and daddy mourning dove were taking turns tending to the nest. I tried to take photos, but couldn't quite reach up high enough.

Hard to tell them apart

Which bird is male and which is female?

I couldn't tell until I heard 'it's-over-that-quick'

A labour of love

Thought I'd look up a few facts about mourning doves to try and impress my birder friends. The first thing I noticed about their nest was how wobbly and untidy looking it was (compared to what the house finches had built). And I was amazed at how industrious they are - they worked nonstop on that nest for two days.

A songbird and bird of peace

In the course of researching mourning doves, I learned some of their endearing characteristics. And I came away with a renewed empathy for their plight.

The following are some notable facts about them (also known as zenaida macroura):

2) Females usually lay only two eggs and the mortality rate is high (about 50% fail to survive, often due to strong winds or storms damaging their loosely constructed nests).[3] Both males and females build the nest and care for their young.[1][2][5][7]

3) They seem to startle easily - compared to other birds around my feeders. Yet, even when other suitable (more remote) areas to nest are available, mourning doves prefer nests in trees or on buildings near human habitation, many within 4 - 8 feet above the ground.[3]

4) Mourning doves make distinct whistling noises with their wings which is most pronounced when they suddenly need to take flight. One theory is that they make this sharp whistling (aka whinnying) noise to warn other birds of potential danger.[4]

5) Mourning doves help farmers by eating grass and weed seeds such as goosegrass, pigweed, foxtail, and more.[3][5][6] They may also help dispense seeds from fruiting plants.[7] Believe it or not, some people even have them as pets.[6]

6) Mourning doves are generally monogamous and even stay together through the winter.[2][5][7]

7) Mourning doves can consume highly salty brackish (river or sea water) without becoming ill or dehydrated the way we would. This explains why they can survive in the desert or other harsh environments.[1]

8) Although not currently considered endangered,[7]  mourning doves are not overpopulated.[8] In the early 1900s, their closest relative, the passenger pigeon (aka ectopistes migratorius) was hunted to extinction.[5] And, according to the North American Breeding Bird Survey, mourning dove populations have been in slight decline since 1966.[1]

See how his throat puffs up when cooing

in a loosely constructed, shallow nest

to camouflage the chicks' appearance though

A mother and her two babies

feeding, exercising, and learning to fly

Not legally killed in Ontario since 1955

I have never in my life heard of anyone shooting a mourning dove, until I read a recent article by the Animal Alliance of Canada.[9] I've lived in the province of Ontario, Canada all my life.

They are at their lightest weight[10] during hunting season and many who shoot them, simply leave them to die (orphaning their baby chicks who will starve to death[8]). Quite often hunters feel there is "not enough meat," or it is "too much work" to prepare a few doves to eat.[3]

What's more, mourning doves are ground feeders and they mistakenly eat fallen lead shot (some have consumed as many as 43 pellets[1]).

So why are they being shot?

Apparently for fun. And for votes, I suppose.

On September 3rd, 2013, Prime Minister Stephen Harper and Ontario Premier Kathleen Wynne approved the hunt of mourning doves[9] in central and southern Ontario.[11] While there is some outcry, I was disappointed to read some commentary in the Globe and Mail and the Toronto Star newspapers.

Notably, in the Globe and Mail, Dawn Sucee (Ontario Federation of Anglers and Hunters fish and wildlife biologist) stated "they make excellent table fare. You can grill them, broil them, roast them."[11]

And Scott Petrie (Long Point Waterfowl executive director and a UWO adjunct professor of wildlife ecology) added that "hunting mourning doves is a great way to spend time with his children."[11]

The Star presented an additional concern of Chris Earley, (U of Guelph Arboretum interpretive biologist and education co-ordinator). The Cooper's hawk populations were down because of pesticide use and they rely on doves as a food source. He warned, "You wouldn’t want to affect the entire ecology, if the hunt becomes too much of a problem for keeping populations at a healthy level.”[12]

Caroline Schultz, (Nature Ontario executive director) reasoned, "In the case of mourning doves, these birds aren’t doing any damage that we’re aware of, it doesn’t fall into the category of a species that is having a negative impact."[12]

I suppose I was most saddened to read the final comment in the Star. Scott Petrie stated, "I know a few guys in wheelchairs who are really excited about the opportunity [to shoot them]."[12]

The Humane Society reveals the truth

Lead shot is toxic to us, animals, and the planet:

Check local or state restrictions prior to owning one: 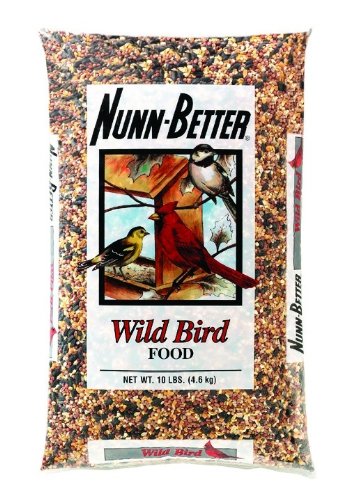 Nunn-Better 10 Lbs Wild Bird Food Blend Bird FoodAmazon Price: $22.69 Buy Now(price as of Mar 29, 2014)
Mourning doves are ground feeders, so I leave some under the feeders for them. The Nunn-Better brand impressed me the most since it contains a balanced, nutritious blend for many songbirds including: mourning doves, cardinals, juncos, chickadees, woodpeckers, sparrows, and woodpeckers. Ingredients: milo, cracked corn, wheat, and sunflower seed.
Next >> Heated Bird Bath - Help Your Feathered Friends Through the Winter