Buy 22 Jump Street or watch the original 21 Jump Street cheaply on Amazon. You too can earn money from writing articles by signing up for InfoBarrel.
InfoBarrel is a writing platform for non-fiction, reference-based, informative content. Opinions expressed by InfoBarrel writers are their own.
InfoBarrel > Entertainment > Film > Movies

Certificate 15, 112 minutesDirectors: Phil Lord, Christopher MillerStars: Channing Tatum, Jonah Hill, Ice Cube22 Jump Street is the sequel to 21 Jump Street (they've moved across the street to number 22, because the Koreans have bought their church back), the events of which are referred to in the opening credits. At the end of the previous film, Captain Dickson (Ice Cube, Ride Along 2) had told Jenko (Channing Tatum) and Schmidt (Jonah Hill) that they were going to college. They start this film out only going to an online university, waiting for tips. Following one up, they try to arrest some Mexicans smuggling rare animals into Metro City Port. After making a total mess of that, Deputy Chief Hardy (Nick Offerman) tells them that this was because they tried something new, and they should go back to doing the same thing as last time, and they are assigned to the new and improved 22 Jump Street.

Credit: https://en.wikipedia.org/wiki/22_Jump_Street#mediaviewer/File:22_Jump_Street_Poster.jpgThis time, Jenko and Schmidt are going to college, to MC State, to investigate a drug ring - again. The drug, Word Hard Yeah, Play Hard Yeah (WhyPhy, pronounced like WiFi), as caused the death of a student - again. Jenko has a much better time than he did when they went back to high school, as this time he fits in much better, especially regarding a fraternity. Schmidt has a harder time of it, but still meets a girl, Maya (Amber Stevens), although her roommate, Mercedes (Jillian Bell), is not impressed by him and makes constant and unending digs about how old he looks. Which could be a dig at how often actors in college and teen films are rather older than their supposed ages. Lots of mayhem, a novel car chase, and a trip to Spring Break in  Mexico, fill the film, as well as the relationship between Jenko and Schmidt, which is often treated like a real relationship (even undergoing couples therapy).The final credits of the film has posters and excerpts from many, many more Jump Street films, as well as assorted related merchandise, and are worth watching. The film references itself - a lot. Often not directly, but there are many times when things that are said can be taken two ways, either as a reference to what Jenko and Schmidt are doing, or as a reference to the franchise and 22 Jump Street, such as Captain Dickson saying that because 21 Jump Street was such an unexpected success, they have been given double the budget because that guarantees more money (which the pair disagree with - but it looks like they may be wrong in this case). This is probably a reference to sequels that follow films that do well.If anything, though, the film possibly overplays the self-referencing elements. As well as the more subtle ones, there are many that are not. They are not designed to be subtle, admittedly, but they are really hammered in, with repeated mentions of how things are exactly the same as last time - exactly the same - and that they should do the same thing. There's even a reference to how, next time, they will be moving across the street again, with number 23 Jump Street in the background as Jenko and Schmidt are saying this. This self-referencing might have worked better if it hadn't been quite so frequent and frequently blatant.There are some subtle elements as well, probably including those that aren't caught on a first run through, which do add interest and depth, such as Jenko saying that they should have tried joining the US Secret Service and protecting the White House (which Tatum did in White House Down) and a chase scene in front of a building named after Benjamin Hill (which looks like a reference to the later British comic actor, Benny Hill).The humour is frequently crude, with plenty of sexual references and bad language, but not always, and it's quite well written. There are some really good set pieces, such as the fight between Schmidt and Mercedes, but they aren't always joined together as well as they could be. There are some really funny bits too so, if you liked the first, you'll probably like 22 Jump Street. 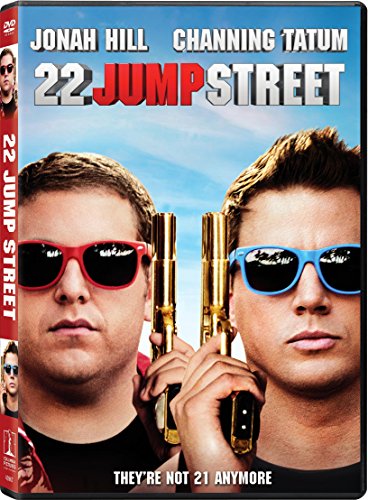