Buy the film 300: Rise of an Empire or the original 300 cheaply from Amazon. You too can earn money from writing articles by signing up for InfoBarrel.
InfoBarrel is a writing platform for non-fiction, reference-based, informative content. Opinions expressed by InfoBarrel writers are their own.
InfoBarrel > Entertainment > Film > Movies

Certificate 15, 102 minutesDirector: Noam MurroStars: Sullivan Stapleton, Eva Green, Lena Headey300: Rise of an Empire is based on the (currently unpublished) graphic novel Xerxes by Frank Miller. It opens with the Spartan Queen Gorgo (Lena Headey, Dredd, The Purge) narrating some things to her soldiers, something she does at other points throughout the film, saying that that day's events started ten years prior to the events of 300 at the Battle of Marathon (yes, the battle after which the long distance race is named) where Athenian forces, including Themistocles (Sullivan Stapleton), the main hero and general of the Greek forces in this film who fulfils the same role Leonidas did in the first, were fighting the invading forces of the Persian King Darius I (Igal Naor), the father of the God-King Xerxes (Rodrigo Santoro, Focus, The Last Stand) who was the main villain from 300, and a significant one in this.This is not actually a sequel to 300 as many of the events in this film take place before those of the first or are happening at the same time but in other places as those in 300. Whereas the first film concentrated on Sparta, Rise of an Empire concentrates more on Athens. It's something like an hour into the film before the end of the Battle of Thermopylae (the Hot Gates frequently mentioned in both the original film and in this one), the climactic part of 300, is reached, and the very final scene of 300 does in fact take place after the final sea battle in the new film.T

Credit: https://en.wikipedia.org/wiki/File:300_Rise_of_an_Empire.jpghe main events in this are various battles leading up to the conclusion whilst the Spartans are preparing to and fighting at the Hot Gates. Instead of the land fights of 300 in this we have naval battles between the Athenian and Greek galley fleets which Themistocles is commanding and the Persian fleet commanded by the scarily attractive and homicidal Artemisia (Eva Green, Dark Shadows, Sin City: A Dame to Kill For) who probably gives the best performance in the movie, managing to be both attractive and frightening at the same time.This is based on actual events, but rather loosely to say the least; it certainly shouldn't be taken as historical fact, even if many of the people depicted did actually exist. For example, Artemisia's backstory, which some time is taken narrating in the middle of the film, is completely untrue.[1]It's rather hard to analyse the film from the point of view of its plot as it largely doesn't appear to have one and a lot of it is a gore fest, even if it's gore of a rather unrealistic kind, befitting its' graphic novel origins. The Greeks are, still, wearing rather impractical outfits - they can't really be called armour - apparently purely to show off their mesomorphic, and quite possibly airbrushed, bodies. Everything in the film was shot in much darker colours than would normally be the case, resulting in it appearing much darker than it would normally be. Even in daylight it's quite gloomy looking, with dark water and dark blood.The film is available in both 2D and 3D. The 3D was the version seen, and it did work quite well in this case with all the flying blood being sprayed everywhere. Battle scenes are deliberately slowed down just so you could appreciate the individual droplets, and huge gouts, of blood and all the weapons flying around. Given the sheer amount of fighting in it - there truly isn't much that isn't fighting - this resulted in a lot of the film being played out in slow motion.A number of people reprise their roles from the first film, notably Lena Headey and Rodrigo Santoro, but others such as Dilios (David Wenham) as well are seen again. 300: Rise of an Empire is a brutal and violent film with one sex scene that simply seemed to be put in because they could - it had no historical accuracy, but you could see its inevitable happening quite easily - and although it's not as good as the original, it can be violently enjoyable. 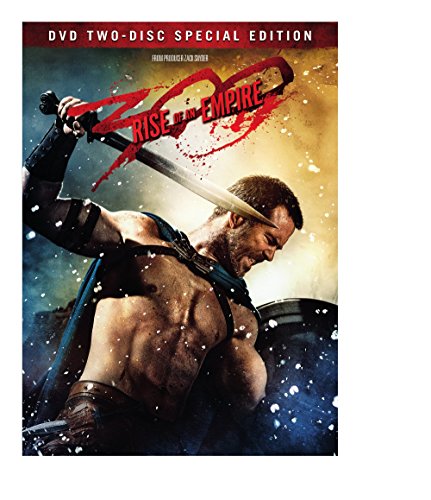