Buy A Long Way Down or the novel on which it was based cheaply from Amazon. You too can earn money from writing articles by signing up for InfoBarrel.
InfoBarrel is a writing platform for non-fiction, reference-based, informative content. Opinions expressed by InfoBarrel writers are their own.
InfoBarrel > Entertainment > Film > Movies

Movie Review: A Long Way Down

Certificate 15, 96 minutesDirector: Pascal ChaumeilStars: Imogen Poots, Aaron Paul, Pierce BrosnanA Long Way Down is based on the book of the same name by Nick Hornby. The film starts off being narrated by Martin Sharp (Pierce Brosnan, No Escape, The Love Punch) who previously had a successful career as a television presenter before he made a mistake that turned out to be pretty serious one, resulting in him losing his wife, family, job and house and finally ending up in prison. One New Year's Eve he decides to end it all by jumping off the top of Topper House in London. He came prepared for the jump and is having one last cigar before he jumps when he is interrupted by Maureen (Toni Collette, Krampus) who is also planning to kill herself. The two are then interrupted by Jess (Imogen Poots, Fright Night), who tries to hurl herself off the roof only to be stopped by Martin and Maureen, and then finally J.J. (Aaron Paul, Need for Speed, Triple 9) joins them. 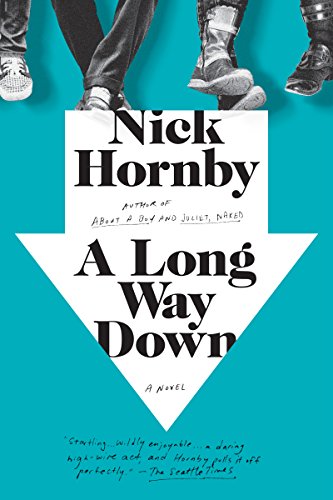 A Long Way Down (Movie Tie-In) Amazon Price: Buy Now(price as of Feb 20, 2016)
This all results in none of them actually going ahead with their suicidal plans and the creation of a pact, instigated by Jess, not to kill themselves before Valentine's Day.

Credit: https://en.wikipedia.org/wiki/File:A-Long-Way-Down-Poster.jpgWhen their story winds up in the papers, it being newsworthy because Martin used to be famous (and then infamous) and Jess's father (Sam Neill) is a politician, they decide to try and make the story their own; a story which Jess then over-elaborates on.Excluding Jess's father, there are no other characters in the film that have any real part in the story - they walk on, are seen briefly, and then they vanish - and even his is quite a small part. This is all about the four major characters and their interactions with each other, and the reasons that drive them to consider suicide in the first place, which are not always as clear cut as they could be.Each of the four narrates a piece of the film, starting with Martin and then with the rest following on from each other. The narrated parts are not that substantial, but each segment begins with it and usually has one scene seen mostly from the viewpoint of the character who started narrating it. The characters are sometimes rather one dimensional - Martin is quite shallow and Jess is rather over-excitable - but this appears to be deliberately so, and they do have hidden depths.One odd thing is, if Martin has lost everything, how is he still able to run a pretty decent car in London as well as afford an apartment in the same city? It seems unlikely that he would have kept much after being divorced, losing his job and going to prison.The film has some funny bits, and some moving ones, as befits a black comedy, and is about the relationship between four strangers with nothing in common except that on New Year's Eve they all decided to kill themselves by jumping off the same building. It has quite a high certification, which is probably due to the suicide theme that is prevalent throughout the film; suicide being talked about, considered and very nearly undertaken. A Long Way Down is, despite the theme, a feel good film which does work. 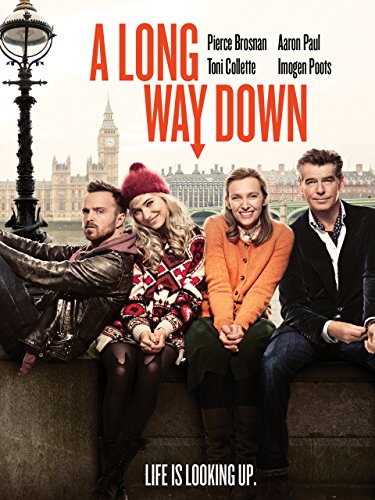