Buy A Million Ways to Die in the West cheaply from Amazon or read more articles on film and television. You too can earn money from writing articles by signing up for InfoBarrel.
InfoBarrel is a writing platform for non-fiction, reference-based, informative content. Opinions expressed by InfoBarrel writers are their own.
InfoBarrel > Entertainment > Film > Movies

Movie Review: A Million Ways to Die in the West

Certificate 15, 116 minutesDirector: Seth MacFarlaneStars: Seth MacFarlane, Charlize Theron, Liam NeesonA Million Ways to Die in the West is set in the small settlement of Old Stump - named after the old stump in the centre of town - in Arizona Territory in 1882 (Arizona didn't become a state until 1912).[1] The film opens with Albert Stark (Seth MacFarlane, Ted) participating in a gunfight - something he is not happy about, because he is basically a bit of a coward. Albert is not happy with his life in general - he hates the frontier life and how many things there are that can kill you, often not intentionally, he is a sheep farmer and, by his own admission, not a very good one at that, and to top things off, his girlfriend, Louise (Amanda Seyfried, In Time, Pan), has just left him for the rather annoying Foy (Neil Patrick Harris). His only friends are Edward (Giovanni Ribisi) and Edward's girlfriend, and worker in the whorehouse, Ruth (Sarah Silverman, Wreck-It Ralph). He's also a bit of a nerd, interested in things to an extent that really have little use in his life.

Credit: https://en.wikipedia.org/wiki/A_Million_Ways_to_Die_in_the_West#mediaviewer/File:A_Million_Ways_to_Die_in_the_West_poster.jpgThen a new woman comes into town, Anna (Charlize Theron, Mad Max: Fury Road, Prometheus, Snow White and the Huntsman). Albert and Anna become friends, and she tries to help him win his old girlfriend back. Anna has a whole host of other skills, including being pretty good with a gun, and helps Albert to learn how to use them - at least, so that he can actually have a chance of hitting what he is aiming at - he is really, really bad. The inevitable happens, and they become mutually attracted to each other. Unfortunately, Anna failed to mention that not only is she married, but that's she's married to Clinch Leatherwood (Liam Neeson), a notorious and feared local outlaw, and she's only in the town whilst his gang robs a stagecoach. When Clinch finds out about the pair, he is not very happy.This film is a Western - sort of. There are many standard Western things - gunfights, Indians (that's what they were called at the time after all), steam trains, barroom brawls, horses and people dying rather often. There are asides referring to the life expectancy - becoming an old spinster of 15, people are living to 35 - as well as Albert's list of everything that can kill you. Which, according to him, is everything. Possibly excepting his sheep.Seth MacFarlane is a pretty busy person in this film. Not only is he the director and the star, he also helped write and produce it. There are a number of notable cameos, such as one by Christopher Lloyd, to watch out for, including one in a mid- and post-credits scene (which was apparently added at a later date), and some of these are people playing the characters they play in other films. This is really not family friendly - there is drug use, swearing, racism (although it's poking fun at the racist way people behaved back then, but it could, and did, offend some), sexual references and quite a bit of gory violence - the cinema trailers were rather quickly toned down to remove some of this, such as the bit with the block of ice. Seth MacFarlane does a good job as Albert Stark, the out of place person who really doesn't want to be there, or even in that century. A Million Ways to Die in the West is often a genuinely funny film, with some romance thrown in, that does have a plot to it and seems to have taken at least a bit of trouble towards accuracy. 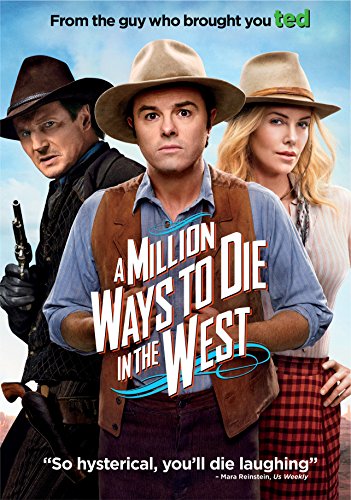