Certificate 15, 105 minutesDirector: Timur BekmambetovStars: Benjamin Walker, Rufus Sewell and Dominic CooperAbraham Lincoln: Vampire Hunter is available in both 2D and 3D, the latter being the one seen. This film is based on the United States' sixteenth President, Abraham Lincoln (Benjamin Walker), and his secret career as a vampire hunter. The film covers the majority of Lincoln's life, although some areas are covered in more detail than others.Although the film initially starts close to the end of Lincoln's life, it is set in his past. The first major scene is set in  1818 when Lincoln (Lux Haney-Jardine) is just a boy of nine, and he stands up for his friend Will Johnson (Curtis Harris as young Will and Anthony Mackie, Avengers: Age of Ultron, Captain America: The Winter Soldier, Man on a Ledge, Runner, Runner, as the adult Will) who is being taken as a slave despite being born free. Lincoln returns home after the death of his father, to take revenge on a man, Jack Barts (Marton Csokas, The Equalizer) who he believes killed his mother.

Credit: http://en.wikipedia.org/wiki/File:Abraham_Lincoln_-_Vampire_Hunter_Poster.jpgBarts is not what he seems, being a vampire, and this nearly costs Lincoln his life. He then meets the vampire hunter Henry Sturgess (Dominic Cooper, Dead Man Down, Dracula Untold, Need for Speed) who teaches Lincoln about vampires and how to kill them. Lincoln's weapon of choice is a silver plated axe.After his training, Lincoln moves to Illinois to await word from Sturgess on which vampires he should destroy. In the meantime, he studies law whilst working in a shop for Joshua Speed (Jimmi Simpson).Vampires are strong in the South of the United States; slavery providing them with an easy food source. The vampires therefore become an important ally for the South during the Civil War, as they wish to preserve their empire. The main vampire protagonists are Adam (Rufus Sewell, Hercules) and Vadoma (Erin Wasson).The vampires depicted in the film are fully able to walk about during daylight. They are supposedly only vulnerable to silver weapons - ordinary ones being unable to kill them - but they do appear to be capable of suffering injuries from normal ones that they are unable to heal.This film is based on the book Abraham Lincoln, Vampire Hunter by Seth Grahame-Smith, who also wrote the screenplay (Grahame-Smith wrote another mash-up novel for Quirk Books, Pride and Prejudice and Zombies, also currently being adapted for film), although the sreenplay is substantially different from the book. Abraham Lincoln: Vampire Hunter is, pretty obviously, rather without historical accuracy - some of the people in the film don't actually exist, and those that do have had their actual story changed, in some cases their deaths being attributed to vampires not illness - but then this isn't a historical film, although the book did tend to stick more to historical facts than the film does.There are quite a lot of differences between the book Abraham Lincoln, Vampire Hunter and the film. The film tends more towards fantasy than it does horror. The 3D does not add that much to the film, only really becoming apparent in a few places. A pretty enjoyable fantastical horror film that puts an entirely different spin on the life of a real life President. 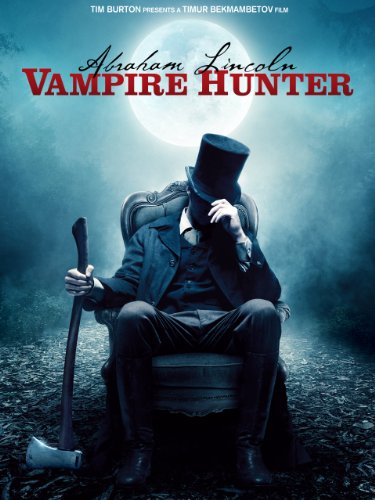