Buy American Hustle cheaply from Amazon or read more articles on film and television. You too can earn money from writing articles by signing up for InfoBarrel.
InfoBarrel is a writing platform for non-fiction, reference-based, informative content. Opinions expressed by InfoBarrel writers are their own.
InfoBarrel > Entertainment > Film > Movies

Certificate 15, 138 minutesDirector: David O. RussellStars: Christian Bale, Amy Adams, Bradley CooperAt the start of American Hustle there is the line "Some of this actually happened" which is actually true; the film is based on true events and an actual FBI sting called ABSCAM, although the characters in this and the story are fictional, so any basis in reality is really quite loose. The film begins in a hotel room in New York, before going back and giving the background to the current situation, in some cases going back years.

Credit: http://en.wikipedia.org/wiki/File:American_Hustle_2013_poster.jpgIrving Rosenfield (Christian Bale, The Dark Knight Rises) is a conman, still rather vain even though he is balding, a fact he tries to hide with a time consuming comb over. The substantial background section explains how he started running cons, and how he met his associate, and mistress, Sydney Prosser (Amy Adams, Batman v Superman: Dawn of Justice, Man of Steel) - he has a rather erratic wife, Rosalyn (Jennifer Lawrence). They run fairly small cons in a fashion that is working well for them, until they are caught in a sting run by the, also rather vain and with his hair in a tight perm, FBI agent Richie DiMaso (Bradley Cooper).DiMaso offers them a deal: In exchange for helping him catch a few white collar criminals by running cons against them, they will have the charges dropped. Initially, Richie starts out wanting to catch some other conmen in the habit of doing the same sort of scams that Irving was running, but he starts changing the targets as the potential for catching more and more prominent figures, such as New Jersey politician and mayor of Camden Carmine Polito (Jeremy Renner). DiMaso gets more and more excited, and the targets get bigger and bigger, with not just one crooked politician but many, and finally the scheme gets the Mob involved. Simply picking a plan and staying with it would have probably worked better, as Richie gets more and more out of control.This is actually a rather mild film for a 15 certificate. There is some bad language, and Amy Adams is wearing a lot of rather revealing tops, but there isn't that much violence and it all seems rather tame compared to other films of the same certification. American Hustle features several people, including the director, from Silver Linings Playbook, and indeed Jennifer Lawrence's character does seem rather similar to the one from that film.The film is very dialogue heavy. Even when the various characters aren't talking to each other, there are narrations over the events, particularly by Irving but also by Sydney and Richie. This is not an action film; the majority of it consists of the characters talking to each other in rooms of differing sizes. As such, this is all down to the characters and how they are portrayed, their motivations and how they interact with each other. Fortunately, these are all done rather well. At times it's hard to tell who is conning who, but it all comes together in the end.There appears to be a subtext of morality to the film, with Richie in particular and the FBI in general portrayed as entrapping people for crimes that only existed because the FBI set them up in the first place, rather than catching them for something they had actually done. American Hustle is a decent thriller with good performances by the cast and a soundtrack appropriate to the era. 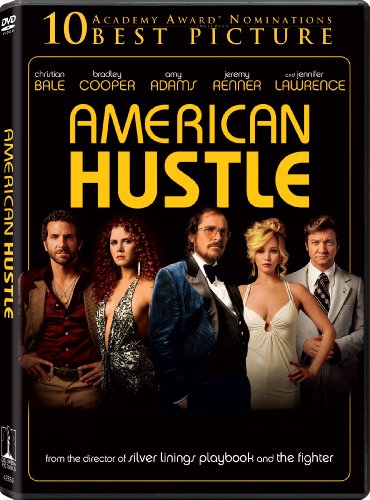