Get American Reunion and the first three American Pie films cheaply from Amazon. You too can earn money from writing articles by signing up for InfoBarrel.
InfoBarrel is a writing platform for non-fiction, reference-based, informative content. Opinions expressed by InfoBarrel writers are their own.
InfoBarrel > Entertainment > Film > Movies

Certificate 15, 113 minutesDirectors: Jon Hurwitz, Hayden SchlossbergStars: Jason Biggs, Alyson Hannigan and Seann William ScottAmerican Reunion, also called American Pie: Reunion is the fourth in the main series of the American Pie films (there is also a spinoff series focusing on various Stiflers that now consists of four films). The cast has now grown up and now got jobs. Jim (Jason Biggs) and Michelle (Alyson Hannigan) now have a child, Oz (Chris Klein) is a celebrity, Kevin (Thomas Ian Nicholas) is married and essentially a house husband and Finch (Eddie Kaye Thomas) is travelling the world. The exception to this is Stifler (Seann William Scott) who still hasn't grown up or, indeed, truly accepted that high school is over.In this film many characters return who didn't appear in American Wedding (aka American Pie: The Wedding) - the reason given for their non-appearance in that film was that the writers couldn't find stories for all the main characters. Oz makes a reference to his not being in that film where he says he didn't make it to the wedding. Oz, being one of the original four main characters, was the most major character not to appear in The Wedding.

Credit: http://en.wikipedia.org/wiki/File:American_Reunion_Film_Poster.jpgIf you haven't seen the other films in the series, you're going to be at a bit of a disadvantage as you won't know the significance of some of the characters who just make cameo appearances in American Reunion or some of the references to other things such as the picture of Stifler's Mom (Jennifer Coolidge) or indeed the history of the main characters.The funniest characters are Stifler and Jim's Dad (Eugene Levy). Jim's Dad continues with his embarrassingly funny discussions with Jim, often covering subjects that most children would not want to have with a parent, especially those that divulge rather too much information about their parent's personal life.It took a surprisingly long time to make this film; it's now thirteen years since the release of American Pie and nine years since The Wedding. The characters do mention missing the tenth anniversary of their graduation, which is commented would have made more sense as a date for a reunion. As well as the characters in American Reunion, the original audience will also have grown up too.If you haven't seen the first three in the American Pie series, you really need to see them first in order to appreciate this film properly. The characters are still likeable, even the often irritating Stifler, and the humour is still there, even if it is often somewhat crude, which is only to be expected from the series which, although it didn't create the term "milf" was probably responsible for releasing it into general (and not so general) culture.Fans may not have to wait as long to see the next American Pie film, as a fifth film seems to be on the cards. Be sure to catch the quite substantial scene that is in the credits. American Reunion is enjoyable and still funny. 3.5/5. 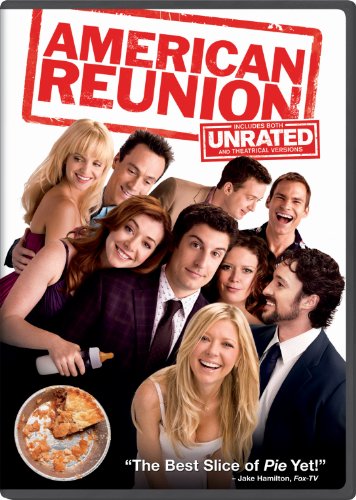