Get Ant-Man or other films and programmes in the Marvel Cinematic Universe from Amazon. You too can earn money from writing articles by signing up for InfoBarrel.
InfoBarrel is a writing platform for non-fiction, reference-based, informative content. Opinions expressed by InfoBarrel writers are their own.
InfoBarrel > Entertainment > Film > Movies

Certificate 12A, 117 minutesDirector: Peyton ReedStars: Paul Rudd, Michael Douglas, Corey StollAnt-Man opens in 1989 with Dr. Hank Pym (Michael Douglas, Haywire, Last Vegas) walking into a S.H.I.E.L.D. meeting with, amongst others, Howard Stark (John Slattery), Tony Stark's father, and Peggy Carter (Haylee Atwell). Pym isn't pleased that the organisation is trying to duplicate his work with the Pym Particle, and quits in disgust.In the present day, Scott Lang (Paul Rudd, Captain America: Civil War) is being released from San Quentin after serving three years for burglary. His former cell mate, Luis (Michael Peña, End of Watch, Fury, The Martian), collects him from the prison. Scott wants to go straight, as he has a daughter, Cassie (Abby Ryder Fortson) - her mother has moved on and is now engaged to a cop, which doesn't go down well with Scott - and wants to be there for her. Scott has a masters in electronic engineering, so doesn't believe there will be a problem. Because of his record, though, he finds it difficult to get a job and, after being sacked by Baskin Robbins because of it, he finally agrees to do a job with Luis and his friends Dave (T.I.) and Kurt (David Dastmalchian). Luis has information on a millionaire who has now retired from his company and will be away for a week, so they decide to break into the house.

Credit: https://en.wikipedia.org/wiki/Ant-Man_%28film%29#/media/File:Ant-Man_poster.jpgPym, meanwhile, on quitting S.H.I.E.L.D., had set up his own company, Pym Technologies. He has since been forced out of the company, which is now being run by his former protégée, Darren Cross (Corey Stoll), who is going to rename the company in his own name. Cross is also researching a project called Yellowjacket, which is a suit of body armour that allows the wearer to reduce their size by decreasing the space between their atoms. There are some teething problems with the suit, which is actually based on Hank's research, Cross having found old footage of Ant-Man in action, and the fact that Hank didn't share his research is something that Cross definitely holds a grudge about.Scott and the others break into the safe in the millionaire's house, but all that he discovers in it is some sort of outfit with a helmet. When he tries it on back at Luis's place, he ends up miniaturising himself. Wanting nothing more to do with it, Scott takes it back to where he stole it from in the first place.The millionaire is, of course, Hank Pym, and he had been watching Scott with the intention of recruiting the latter for his own aims - namely, to stop Cross and destroy his research. Pym's daughter, Hope (Evangeline Lilly, The Hobbit: The Battle of the Five Armies, The Hobbit: The Desolation of Smaug), has been somewhat estranged from her father, following the death of her mother, although she is working with him on this. She is not pleased with the inclusion of Scott either.With the Ant-Man suit, Scott will be able to reduce his size to that comparable to an ant; indeed, Pym communicates with ants, and they provide assistance and transportation, resulting in quite a lot of scenes where there are ants bigger than a human, if the human is Ant-Man - not really the best film to watch for anyone with a fear of ants. Scott's mass remains the same, though, which gives him a great advantage in combat - although there is a scene late in the film where something that was shrunk did not retain its mass; either different technology that wasn't explained, or simply ignoring that bit when it didn't fit with the plot.There are references to the Avengers - Scott suggests that they need to call them in, but Pym is less than impressed with the Starks - including an appearance by one of the team and a reference to the events of Age of Ultron, for this is the latest instalment in the Marvel Cinematic Universe and ties into the other film franchises and television series.There is quite a bit of humour in the film, and this is in some ways one of the more light-hearted ones, even with the occasional death. For example, when the Titanic is mentioned, this prompts a discussion of the film, rather than the ship, and how it killed Leonardo DiCaprio. Luis, Kurt and Dave do not inspire confidence as a crew of burglars when they are recruited to help, but they are more competent than they seem. They'd practically have to be. Another element of humour is the contrast between events when they are viewed in miniature and at normal size, such as in a climactic battle where there are huge objects and vehicles being thrown around and massive destruction occurring. That's what it looks like in miniature; the full-size comparison isn't full of massive explosions, but little zaps and pops. Not the first time this contrast has been used in a film, but it's still funny.The relationships between Hope and her father and Hope and Scott are rather stereotypical, as is how they are resolved, but the cast manage to carry it off. Scott is excellent as a rather unprepossessing hero - he introduces himself when he's Ant-Man by saying "Hi, I'm Scott" - with a rather unheroic origin as a criminal, even if he was stealing from companies who were effectively stealing from their customers. Cross is another rather stereotypical villain but fortunately Stoll manages to carry that off well enough, combining a blend of ruthless ambition with an element of insanity. Like another of the generally lighter toned Marvel films, this is to a large extent carried by its lead character - who does bear some similarities.The film is available in both 2D and 3D, with the 2D version being the one watched, although it looks like it could have been the sort of film that works better in 3D than most. There are mid-credits and post-credits scenes to watch out for, tied into future characters and films in the Cinematic Universe, as well as a standard cameo by Stan Lee. All-in-all, Ant-Man is a rather light-hearted entry into the Cinematic Universe that's fun to watch, with some engaging characters and at times genuinely funny. 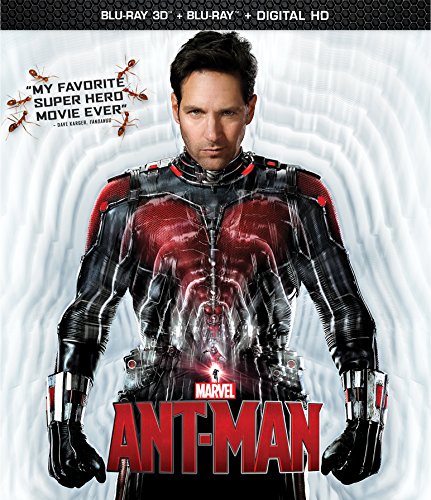