Buy Bad Neighbours cheaply from Amazon or read more articles on film and television. You too can earn money from writing articles by signing up for InfoBarrel.
InfoBarrel is a writing platform for non-fiction, reference-based, informative content. Opinions expressed by InfoBarrel writers are their own.
InfoBarrel > Entertainment > Film > Movies

Certificate 15, 96 minutesDirector: Nicholas StollerStars: Seth Rogen, Rose Byrne, Zac EfronIn Bad Neighbours (also known as Neighbors, but presumably altered in some regions to differentiate it from the Australian soap with the same name), Mac (Seth Rogen, The Interview, This is the End) and Kelly Radner (Rose Byrne, The Internship, X-Men: Apocalypse) are a couple who have a new baby and a new house in a quiet neighbourhood, who are still coming to grips with the fact that they are married, responsible adults with a child, which is causing them to live separate lives from their old friends. When a college fraternity, Delta Psi Beta, buys and moves into the house next door, they go and meet its president Teddy (Zac Efron) and vice president Pete (Dave Franco, Now You See Me, Unfinished Business). Concerned about the level of noise that a fraternity will bring to the area, with them having a new baby, Mac and Kelly ask if the frat boys can keep the noise down.

Credit: https://en.wikipedia.org/wiki/File:Neighbors_%282013%29_Poster.jpgInitially, they get on fine with the frat boys, being invited to and staying round for a party on the first night. Parting as friends, Teddy tells them that if they have any problems they should contact him directly and not involve the police. The next night, when there is another party late into the night, keeping their baby awake, they, unable to contact Teddy by phone, get the police involved. Intending to do it anonymously, this fails when the police tell Teddy who made the complaint about the fraternity. Teddy takes this quite badly, considering it to be a betrayal of his trust, and starts taking revenge.There then follows a war which escalates more than a little as both sides try to get the upper hand; unable to sell their house for a decent price with a fraternity next door, the Radners are forced to stay, so try various methods to get them to leave. Delta Psi Beta, on the other hand, have no intention of either leaving or curtailing their parties unless they have to, but they are very careful to not get into any further trouble or to offend anyone else in the neighbourhood.The humour is frequently crude and often slapstick, with more than a little bad language and some nudity. Some of the slapstick seems rather on the violent side. Seth Rogen does seem to be playing the same character again, the same that he does in every film, as every person he plays seems to enjoy smoking joints and this one is no different. There does seem to be a message about friendship and relationships buried in the film though. Some of the product placement is a bit on the forced side, especially AT&T's whose representative is able to give a whole spiel about the company at a job fair, which seems to be less product placement and more an actual advert. This isn't really one of Seth Rogen's better films, and it certainly won't appeal to everyone (and it's probably a bit too crude and unsubtle for some), but Bad Neighbours is enjoyable and funny enough, and did well enough to result in a sequel. 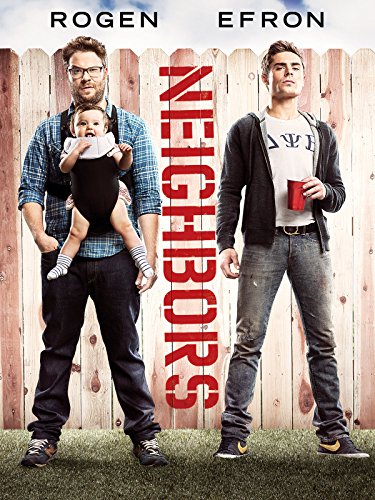