Read more articles on Movies and Television. You too can earn money from writing articles by signing up for InfoBarrel.
InfoBarrel is a writing platform for non-fiction, reference-based, informative content. Opinions expressed by InfoBarrel writers are their own.
InfoBarrel > Entertainment > Film > Movies

15 certificate, 92 minutesDirector: Jake KasdanStars: Cameron Diaz, Justin Timberlake, Jason Segel"I became a teacher for all the right reasons: shorter hours, summers off and no accountability." Elizabeth HalseyWe are first introduced to Elizabeth Halsey (Cameron Diaz, The Counselor, The Other Woman) the Bad Teacher of the title, at the end of her first, and last, year as a teacher. It's made plain that she didn't care about teaching, the pupils or her fellow teachers. She is now leaving to marry into money.Unfortunately for her, when she gets home she finds her fiancée and her future mother-in-law together, and said mother-in-law to be has convinced her fiancée to cancel the engagement, being of the justified belief that she (Elizabeth) is only marrying her son for his money. A point made clear when she cannot immediately give his birthday.

Credit: http://en.wikipedia.org/wiki/File:Bad_Teacher_Poster.jpgAt the end of the school holidays, Elizabeth is back at the school she left a few months prior, in a much cheaper car and after having apparently slept her way through an entire sports team during the holidays in an attempt to acquire a new beau with money, although with no luck.She cannot be bothered teaching her class, instead playing videos whilst she stays behind her desk, usually either high, drunk, hung over or asleep. Further attempts to find a new sugar daddy convince her that she needs some cosmetic enhancement done, although the price tab is high, nearly ten thousand dollars.Attempts to get this money from a variety of people, including her former fiancée, all fail.A new substitute teacher, the somewhat nerdish and occasionally odd Scott Delacorte (Justin Timberlake, The Social Network, In Time, Runner, Runner) arrives, and she quickly sets her sites on him after discovering his family is rich. Another teacher, the overly excitable, highly strung and quirky Amy Squirrel (Lucy Punch), who earlier tried to become friends with Elizabeth, is also attracted to him.Meanwhile, the gym teacher, Russell Gettis (Jason Segel), has made it clear that he is interested in Elizabeth, but he has no money, so whatever her physical attraction to him may be, he isn't a suitable target for her.Elizabeth continues through the school year, attempting to raise money for her surgery, and only paying attention when something crops up that can make her money - such as the school car wash, which she decides to help with, and makes it a rousing success with all the children's fathers through her dress and performance.When she discovers that there is a substantial cash bonus for the teacher whose students perform best in the state exam, she actually starts teaching her class, although her methods are sometimes suspect.As the school year progresses, Ms Squirrel becomes justifiably convinced that Ms Halsey is trying to pull of several scams, and attempts to reveal this. She is hampered in doing so because she lacks Halsey's deviousness and apparently has a history of being erratic - "And what I would hate to see, is for you to get overwhelmed. Like you did in 2008." says Principal Snur to her - which damages her credibility.The end of the film holds no great surprises, and Bad Teacher itself is okay, nothing great. Not suitable for young children due to strong language and sexual references. 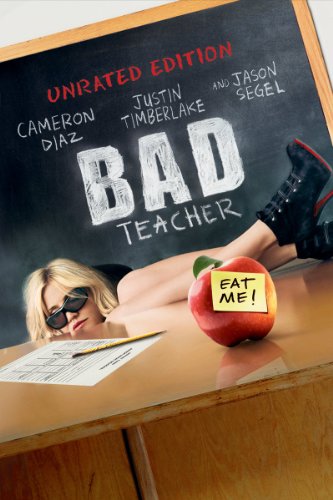