Buy Battleship cheaply from Amazon or read more articles on film and television. You too can earn money from writing articles by signing up for InfoBarrel.
InfoBarrel is a writing platform for non-fiction, reference-based, informative content. Opinions expressed by InfoBarrel writers are their own.
InfoBarrel > Entertainment > Film > Movies

12A certificate, 131 minutesDirector: Peter BergStars: Alexander Skarsgård, Brooklyn Decker and Liam Neeson Films have been adapted from many sources. Literature is common; there are many books and plays that have been turned into films. Any reasonably successful television programme a couple of decades or so old has a good chance to have a film based on it. Any reasonably successful film of a similar age also runs the risk of being remade into a new film. Even video games have been made into films. A board game (Battleship, from Hasbro) is a bit of a new one though. At least most modern video games are big enough and have enough depth to make a film from, something that isn't typical of a board game.In 2006, something called the Beacon Project was set up, designed to transmit a message to another world that appeared potentially habitable. Now, something has answered the message.

Credit: http://en.wikipedia.org/wiki/File:Battleship_Poster.jpgAlex Hopper (Taylor Kitsch, John Carter) is a screwup. His brother, Stone Hopper (Alexander Skarsgård), who serves in the U.S. Navy, after one screwup too many by his brother, forces him to join the Navy also - where, despite his potential,  he still continues to be a screwup.When the aliens arrive, U.S. Navy Admiral Shane (Liam Neeson, Non-Stop, Taken 2, The Lego Movie) is in charge of the 2012 RIMPAC naval exercise, consisting of ships from the navies of thirteen countries. The aliens establish a force field around the islands of Hawaii, leaving most of the naval ships on the other side of the barrier, with the exception of two US and one Japanese ship; Stone Hopper commands one of the US ships, whilst Alex serves on another.The aliens prove to be hostile, and attack anything they consider a threat. How they determine what a threat is seems a bit erratic, as it can include cars, roads and engines, but doesn't necessarily include military personnel.The game Battleships was first published by Milton Bradley in 1931. During the 'tween war period when the game originated, all the Great Powers were frantically building battleships, believing they would still be the most important unit in naval conflict (they were wrong). After World War II, battleships were gradually phased out. Most of the worlds remaining battleships are actually museum pieces in the United States. There are none currently in commission or even in reserve fleets.The battleship of the films title is the USS Missouri, a museum ship in Pearl Harbour, Hawaii. With the majority of the naval forces unable to penetrate the barrier, the only other ship besides the three guided missile destroyers within the barrier is the Missouri.The film is actually better than expected for one based on a game that simply involves guessing where your opponents ships are and sinking them. There is a reference to that in the film, where something happens, but at least the entire film isn't based around it. It certainly shouldn't be confused with something that actually has a plot - or even logic in some places - but it's a reasonably enjoyable action film. The singer Rihanna (Home, This Is the End) has a fairly large role in the film, as the enlisted Raikes, and performs fairly well. Not a cinematic masterpiece, but if you want to watch something with lots of action and big explosions, Battleship will serve nicely. 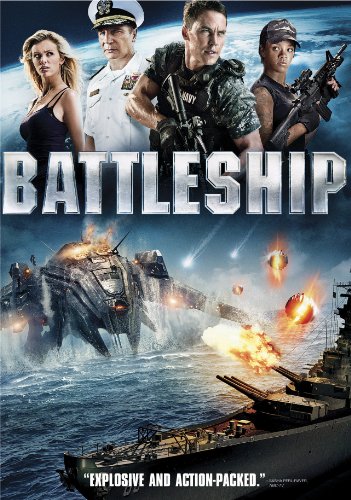