Get the novel Before I Go to Sleep cheaply from Amazon. You too can earn money from writing articles by signing up for InfoBarrel.
InfoBarrel is a writing platform for non-fiction, reference-based, informative content. Opinions expressed by InfoBarrel writers are their own.
InfoBarrel > Entertainment > Film > Movies

Movie Review: Before I Go to Sleep

Certificate 15, 92 minutesDirector: Rowan JoffeStars: Nicole Kidman, Colin Firth, Mark StrongBefore I Got to Sleep is based on the novel of the same name by S.J. Watson. Christine (Nicole Kidman, Paddington, Stoker) wakes up in a strange bed with a strange man in it. Probably believing that she has had a one night stand, perhaps due to the influence of alcohol as she thinks she is in her early twenties and still studying, she sneaks out of the room and into the bathroom - where she sees a montage of pictures of her and the strange man in the bed. The man, Ben (Colin Firth, Kingsman: The Secret Service, Tinker, Tailor, Soldier, Spy), is her husband, and they have been married for fourteen years. Catherine is not in her early twenties, as she believes, but is actually forty.Ben tells her that ten years previously she was involved in a car accident. The accident destroyed both her ability to form long-term memories - every night during her sleep she will forget everything that happened that day - and some of her memories themselves, which is why she doesn't remember getting married, or her husband, and thinks she is still young. The film then goes back to a time two weeks in the past, catching up on events.

Credit: http://en.wikipedia.org/wiki/Before_I_Go_to_Sleep_%28film%29#mediaviewer/File:Before_i_go_to_sleep_poster.jpgCatherine has been seeing a neuropsychologist, Dr Nash (Mark Strong), who has been treating her pro bono for a paper he is working on. She is seeing him without the knowledge of her husband, and has been keeping a video diary. Dr Nash tells her that she wasn't injured in an accident, but was instead attacked, beaten, and left for dead. Catherine discovers that Ben has been keeping secrets about her past from her. When she confronts him, he says that it's for her own protection, that he has told her these things again and again, but she forgets them, and that he does not always have the strength to tell the truth every single day.This seems like a couple who are struggling to keep their marriage together after tragic events, but their relationship does suffer, as Ben has to repeat the same things day after day, constantly being confronted in the morning by a wife who doesn't remember him. Catherine herself is very isolated. Other than Ben, the only other person she sees is Dr Nash, as it's hard to maintain relationships with people when you can't remember who they are the next day, and having to be introduced over and over again. Consequently, she spends most of her time alone, at home.There is a twist to this story that probably won't be seen coming, though. Catherine, due at least partially to her amnesia and the consequent fact that she forgets things, doesn't know who to trust. Ben's habit of keeping secrets sometimes causes her to become paranoid towards him, but this is usually explained away by Ben. She is regaining some memories regarding the attack, and these cause her to become suspicious of Dr Nash too. Other than the three main characters - Ben, Dr Nash and Catherine - there aren't really many other characters, so it is all down to the interaction between them. Catherine is in the vast majority of the scenes, either alone, or with Dr Nash, or with Ben. She is thus the main focal point as she struggles to piece events together. Although, for much of the film Before I Got to Sleep seems like a film about the problems with a relationship caused by an injury, it is actually a very good mystery thriller that will likely keep you guessing until the truth is revealed. 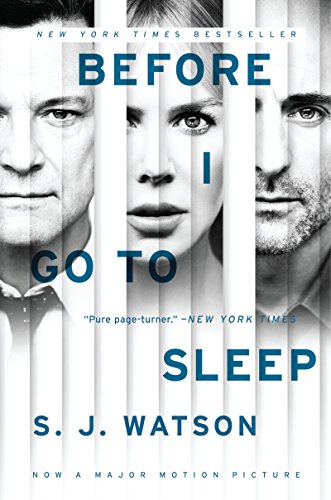