Buy Big Hero 6 or Big Hero 6 books cheaply from Amazon. You too can earn money from writing articles by signing up for InfoBarrel.
InfoBarrel is a writing platform for non-fiction, reference-based, informative content. Opinions expressed by InfoBarrel writers are their own.
InfoBarrel > Entertainment > Film > Movies

Certificate PG, 102 minutesDirectors: Don Hall, Chris WilliamsStars: Ryan Potter, Scott Adsit, Jamie ChungBig Hero 6 is an animated film based (fairly loosely in some respects it appears) on the Marvel Comics superhero team of the same name. It is set in the fictional city of San Fransokyo, which is San Francisco with Japanese touches grafted onto the buildings, vehicles and culture, along with, for some reason, giant, floating, tethered wind turbines. Hiro (Ryan Potter) is a 14 year old boy who graduated from school at 13. Incredibly intelligent, Hiro currently spends his time competing in Bot Fights, a back street version of Robot Wars where players fight their robots for money (the fighting is legal; the money part of it isn't).Hiro lives with his older brother, Tadashi (Daniel Henney), with their Aunt Cass (Maya Rudolph, The Angry Birds Movie) at the cafe she owns. Tadashi is studying at the San Fransokyo Institute of Technology and wants to get his brother interested in going there and studying. To this end, Tadashi takes his brother to the lab one night and introduces him to his friends - Go Go (Jamie Chung, The Hangover Part II) Wasabi (Daman Wayans Jr.), Honey Lemon (Genesis Rodriguez) and Fred (T.J. Miller), as well as Tadashi's current project, Baymax (Scott Adsit), a large, inflatable robot AI programmed to be a "personal healthcare assistant" and heal the sick.

Credit: https://en.wikipedia.org/wiki/Big_Hero_6_%28film%29#mediaviewer/File:Big_Hero_6_%28film%29_poster.jpgWhen tragedy strikes and Tadashi is killed in an accidental fire, Hiro is devastated - until he discovers the fire wasn't an accident and was instead used by an unknown villain wearing a kabuki mask (kabuki is a traditional Japanese dance-drama[1]) to seize some microbots and basically turn himself into a super villain.Hiro decides to transform Baymax with some additional programming and by adding some armour - something that Baymax considers may harm his huggable non-threatening appearance - into something more useful for stopping a super villain. Tadashi's friends and Hiro himself also superhero up and use their knowledge and skills to make themselves costumes. Together, they go hunting for the masked man - whose identity does seem obvious - certainly to Fred - but is it?The film revolves around Baymax. Without Baymax, it wouldn't have been as good. The large, huggable marshmallow of a robot has an innocence that contrasts with the action of the film and the armour that he ends up wearing. He only really wants to help people. Baymax also, amusingly, acts drunk when his battery is low. Hiro himself gets some lessons on friendship, maturity and growing up. This is an action packed film with plenty of action, but it is more than that. There is humour, too, and it is occasionally upsetting and touching. If there is any downside to the film, it may be the confusion it has over its cultural identity - is it American or Japanese? Why not set it in either San Francisco or Tokyo, rather than a blending of the two?The film is available in both 2D and 3D, with the 2D version being the one watched. There are lots of minor details in the film, probably more than you will recognise. These include a painting featuring Stan Lee of Marvel Comics, wear and tear on the armour and equipment after it is used in battle and things like a McMaster-Carr catalogue (the last could be product placement, but you'd have to know what it was, or look it up to know that). The film was accompanied by an animated short, Feast, viewing the life of a man through the eyes of his dog, and the food they eat. Big Hero 6 is a great animated film that should appeal to all ages; younger watchers will probably just see the action and fun, whilst older ones could get some of the deeper messages that are scattered throughout the film (fortunately, not in an over-obtrusive way). 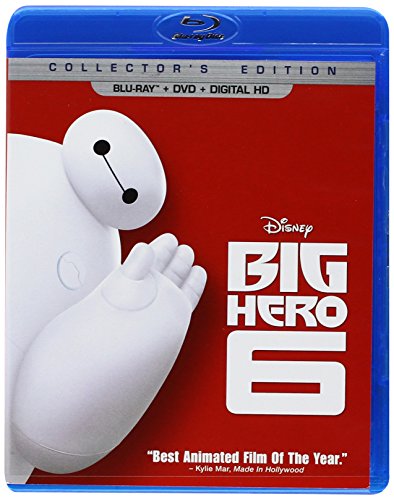